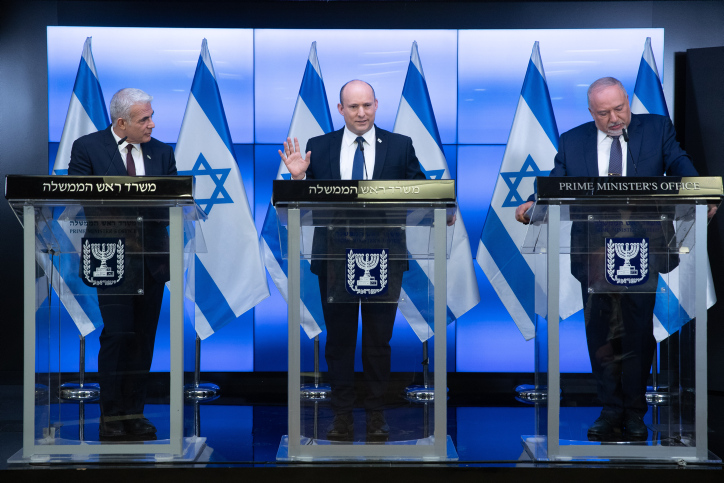 Speaking first, Bennett addressed the successes of the government, emphasizing the effectiveness of their fight against the Delta variant, through the use of booster shots.

“It is enough to look at Europe to understand where we are today, in comparison to the rest of the world,” he said.

He then directed his attention to the state budget, the first which has been passed in Israel in three years.

“We have passed the budget which promises financial and political stability,” he said. “I want to thank everyone involved, Yair [Lapid], Liberman, who did excellent work.”

“The government is stable,” he added. “It will last its entire term.”

“There is a long road ahead of us, and each of us, in our own role, will get to work. We are not in the process of a fifth election right now, which is in itself a blessing.”

“Friends,” he concluded, “tomorrow morning, with a stable government, and an approved budget, we begin work.”

Foreign Minister Yair Lapid spoke, placing particular emphasis on thanking Ra’am chairman MK Mansour Abbas, for facing the racism and discrimination which he did in the run-up, and aftermath, of the passing of the state budget.

Shortly after the press conference, the Likud responded in a statement criticizing the budget and reiterating their predictions of the government’s imminent collapse.

“After the approval of the bad budget, which raises prices, imposes taxes and transfers tens of billions of shekels from Israeli citizens to the Islamic Movement, the chances of overthrowing the government increase,” the Likud wrote.

“Netanyahu has passed more state budgets than any other leader in the Western world. The government under his leadership has led a successful economic policy, and thanks to them, Israel was ranked one of the first countries in the world to exit the COVID pandemic.”

“My greetings to the three musketeers who ‘saved’ the State of Israel from chaos and are celebrating the transfer of the budget as if it were an invasion of Normandy. Undoubtedly, the nation is holding its breath, but where is Mansour [Abbas]?” he asked.