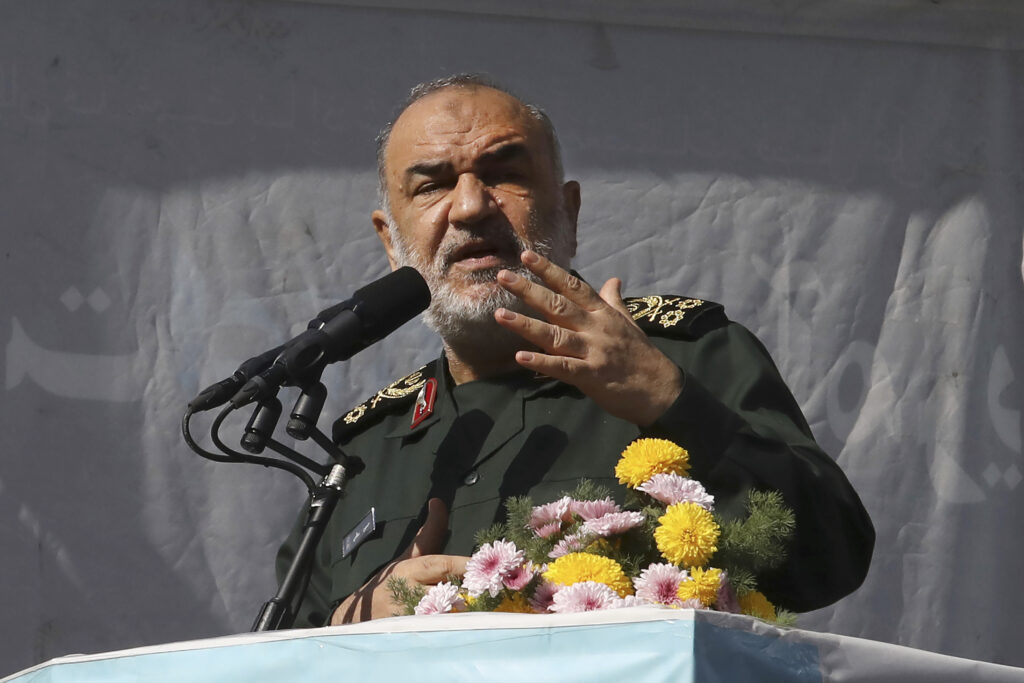 Thousands of Iranians gathered on Tehran streets Thursday for the anniversary of the 1979 seizure of the U.S. Embassy, chanting “Death to America” and “Death to Israel,” and burning American and Israeli flags. The embassy takeover triggered a 444-day hostage crisis and a break in diplomatic relations that continues to this day.

The government-organized commemoration of the National Day of Fighting International Arrogance, long a venue for voicing anti-Western sentiment, typically draws angry crowds each year. Last year, authorities canceled the event due to the still-raging coronavirus pandemic but on Thursday, state media said that 800 cities across Iran staged demonstrations.

Gen. Hossein Salami, chief of the Revolutionary Guard, denounced in a lengthy speech to the crowds what he described as American aggression in the region over the past decades, declaring that the “children of this nation will stand bravely against any power that wants to damage their interests.”

“On this day we mark the Iranian people’s great victory over the United States,” he said.

“The U.S. is the global dictatorship manufacturing plant. The world suffers from the pain the U.S. causes across 40 points around the world. The U.S. defeat, as it transpired in Iran, was too difficult for the Americans to bear,” Salami said.

“The American policy toward Iran has always been a failure,” he claimed. “The Biden administration has not learned any lesson from it.”

“The U.S. is no longer able to defend Israel,” he said.

Long-simmering tensions between the United States and Iran have flared again in recent months after Iran’s election of President Ebrahim Raisi, which brought hard-liners to power across every branch of government and stalled Tehran’s negotiations with world powers to revive its now-tattered 2015 nuclear deal.

Iran has ramped up nuclear escalations at the same time, enriching small quantities of uranium closer than ever to weapons-grade levels and interfering with international inspections of its nuclear sites.

After months of delays, the European Union, Iran and the U.S. announced Wednesday that indirect talks to resuscitate the deal would resume on Nov. 29 in Vienna. In comments broadcast Thursday on state media, Raisi reiterated that Iran wants “results-oriented” nuclear talks and would “stand against excessive demands which could damage our nation’s interests.”

In 2018, then-President Donald Trump withdrew the U.S. from the nuclear accord and imposed crushing sanctions, an escalation that set off a shadow war between Iran and the West that has targeted commercial shipping and roiled crucial Middle East waterways. The seas have witnessed a series of hijackings and explosions, including a fatal drone attack earlier this year that the U.S. blamed on Iran.

On Wednesday, the eve of the 42nd anniversary of the embassy seizure, American officials revealed that Iran had seized a Vietnamese-flagged oil tanker in the Gulf of Oman last month and still holds the vessel in its port.

Iran, meanwhile, offered conflicting accounts of what happened, claiming that Guard commandos had thwarted a U.S. seizure of a tanker carrying Iranian oil in the Gulf of Oman and freed the vessel. It aired dramatic footage on state media but did not further explain the incident.

In his speech to the crowds outside the building that once housed the U.S. Embassy, Salami lauded the Guard for its assault, accusing the Americans of trying “to take our oil” and supporting “pirates.”

“We are serious in defending our homeland,” he declared.

A large American flag was spread on the street so protesters could stomp on it.

A few embassy staffers fled and hid in the home of the Canadian ambassador to Iran before escaping the country with the help of the CIA.

The fall of the U.S.-allied shah transfixed America, as nightly images of blindfolded hostages played on television sets across the nation. Ultimately, as Carter left office, all 52 captive American diplomats were freed.