Israel Netanyahu: Bennett Promised to Lower Taxes. Fortunately, There Is No Tax on Bennett’s Promises
Israel 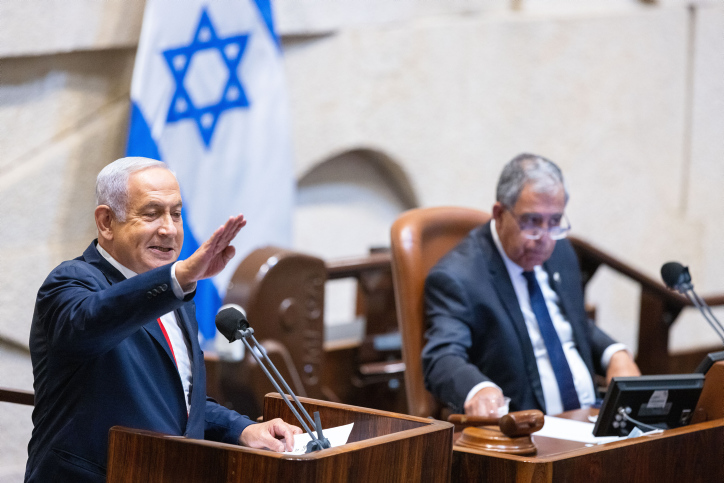 During the marathon parliamentary debate ahead of the vote on the 2021-2022 state budget, Opposition Leader MK Binyamin Netanyahu (Likud) said Wednesday evening “Bennett promised to lower taxes. Fortunately for all of us, there is no tax on Bennett’s promises. Otherwise, Israel’s economy would have collapsed, for generations to come. They raise taxes on soft drinks and disposable utensils, and [they are imposing] a tax on the periphery that is euphemistically called the congestion tax. These are taxes that create severe discrimination against the weaker echelons, against the chareidi community and against the periphery.”

The government, Netanyahu said, is helping the rich by implementing reforms that “allow them to build more housing units on their villa plots.” The government, he said, does not care for Israel’s soldiers and has “tossed them aside.” In this case as well, “you broke another one of Bennett’s clear promises,” Netanyahu told members of the coalition.

“Your government of lies promised that it would lower prices, but in practice you are raising prices. Fuel is rising, electricity is rising, public transportation is rising, fruits and vegetables are rising. Everything is getting more expensive. Everything is increasing except for [the number of] ​Bennett’s [Knesset] seats.

“Lapid went to war against the coalition funds. In practice, you doubled the coalition funds. Lapid also attacked the Norwegian law and today, with Bennett, he has set a world record for the number of ‘Norwegian’ MKs. They set a Guinness record for the number of ‘Norwegian’ MKs. Here in the Knesset, new bureaus are being built to accommodate all the ‘Norwegian’ MKs. They have simply established a Scandinavian colony in the Knesset. Lapid attacked the JNF and said it was a conduit for transferring money to parties. He has now appointed his sister-in-law to the JNF board. About this it is said ‘The baker should not testify to the quality of his own dough.’

“The Islamic movement is receiving a fortune. Despite all my experience in politics, I never imagined that the money of the citizens of Israel would be transferred from the budget to the associations of the Islamic movement. Is it any wonder that Hamas wants this budget to pass? Is it any wonder that Abu Mazen [Mahmoud Abbas] wants this budget to pass? This week it was reported that senior Palestinian Authority officials hope the budget will not fall. The Palestinians know that from Bennett and Lapid they will get everything they want, and what they want is bad for the State of Israel…

“Heading this government is someone who promised he would not sit with Meretz, that he would not sit with Ra’am, and that he would not be appointed prime minister with less than ten seats. But Bennett lied to the public, his constituents and all of Israeli citizens, which is why something amazing is happening here: Just four months after the formation of this bad government, Bennett barely passes the electoral threshold, if at all. Bennett took to the climate conference the second largest delegation in the world after the United States. In this delegation, Bennett had more escorts than he has voters. And for what? For ‘grey shirt’ Bennett. He is taking photos in the corridors with leaders who disregard him.

“Something encouraging is happening these days. Masses of Israelis are returning home to the Likud and to the parties of the true right, because they realize they have been lied to,” Netanyahu said in his speech. The public, he stated, “wants a real government, not a reality government,” adding, “This government is a strange hybrid of a group of people with no real connection. Everyone knows they will not last, and the only thing holding them together is the desire to survive for the 15 minutes of fleeting fame.”