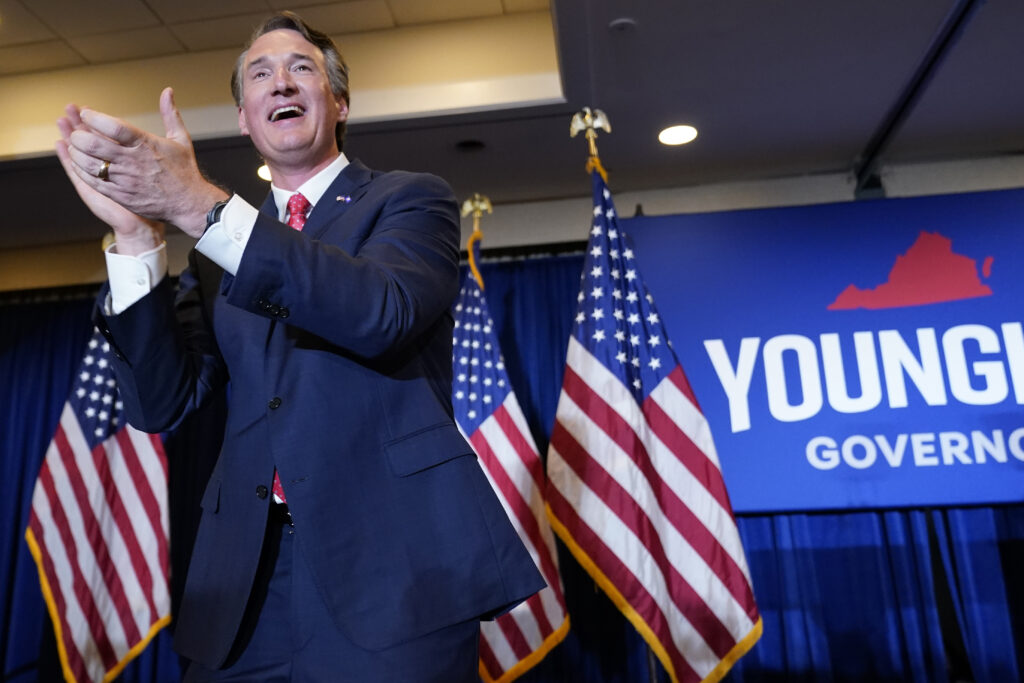 In a stunning victory in Virginia and a strong showing in New Jersey, the Republican Party has fashioned a playbook that could repair the GOP’s tarnished image in swing states and suburban districts across the nation.

But it is a formula that may be difficult to replicate on a broad scale in next year’s midterm elections.
Republican businessman Glenn Youngkin, virtually unknown a year ago, won the Virginia governor’s race early Wednesday by running away from the national Republican Party and its most prominent leaders — especially Donald Trump.

The Virginia Republican spent the closing months of his campaign avoiding the divisive issues that most animate Trump’s base, including the baseless prospect of election fraud. And Youngkin benefited from running against former Gov. Terry McAuliffe, a political insider with a muddled message.

With a clear enthusiasm advantage on the right, Democrats should worry that the Republican victory in Virginia and a closer-than-expected governor’s race in New Jersey — which remained virtually deadlocked early Wednesday — could signal an anti-Democrat wave in 2022.

Democrats lost 63 seats in the House and six in the Senate the year after Republican Bob McDonnell won the Virginia governor’s race in 2009, the last Republican to win a statewide contest. This year, President Joe Biden’s sagging numbers and Democratic dysfunction on Capitol Hill have added to the traditional prevailing winds that plague the party in the White House.

But to take advantage of such a climate in Tuesday’s elections, Republicans in Virginia — and New Jersey, to some extent — followed a strategy that relied on placating Trump’s base while avoiding Trump and his brand of politics. And in a surprise move, Trump cooperated by keeping a low profile, participating only in remote call-in appearances and sending emails late in the race to his supporters.

Meanwhile, as Democrats in Virginia and New Jersey railed against Trump, the Republican candidates tapped into just enough pro-Trump-style grievance to energize the former president’s base. And Youngkin, in particular, offered an uplifting message focused on “kitchen-table” issues — education chief among them — that gave Trump-weary Republicans and independents permission to vote GOP again.

Perhaps to avoid turning Trump against them, Youngkin’s team worked to keep all high-profile Republicans out of the state.

After briefly raising concerns about election integrity in the Republican primary fight this spring, Youngkin landed on a far less controversial policy that would help him unify both Trump’s fiery base and anti-Trump suburban voters: education.

Taking a page from Democrats, the Virginia Republican promised to boost teacher pay and spend more on local schools than ever before. To appeal to Trump’s base, he railed against “critical race theory,” an academic framework that isn’t taught in Virginia schools, but centers on the idea that racism is systemic in the nation’s institutions and that they function to maintain the dominance of white people.

But the broader issue of education didn’t begin to resonate more intensely until McAuliffe quipped during a late-September debate that, “I don’t think parents should be telling schools what they should teach.”

The comment, taken out of context during a discussion about banning books, became a centerpiece of Youngkin’s campaign, which quickly launched a “Parents Matter” effort reinforced by heavy advertising spending. The issue tapped into suburban parents’ deep frustration with pandemic-related forced school closures, which extended across the state for much of last year.

“That struck a nerve with parents, including me,” said Republican National Committee Chair Ronna McDaniel, suggesting the issue could help Republicans in the future. “Across the country, I think the suburbs are coming back to us.”

Overall, 14% of Virginia voters said education was the most important issue facing the state, according to VoteCast. About twice as many cited economy and jobs, while 17% named COVID-19. Voters who ranked the economy and education as the top issues were more likely to back Youngkin over McAuliffe.

Democrats quickly explained away their struggles by pointing to historical patterns. Indeed, only once in the last 40 years has a Virginia candidate won the governor’s race when their party held the White House. And not since 1977 has a New Jersey Democrat won a second consecutive term.