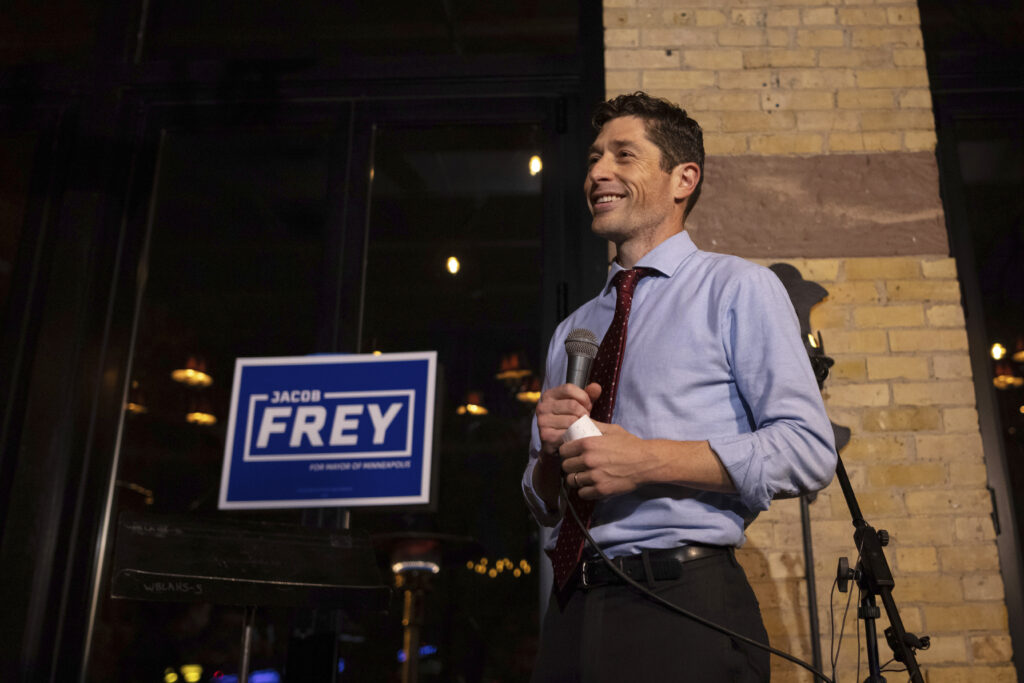 Minneapolis Mayor Jacob Frey risked his bid for a second term by opposing a push to replace the city’s police department. Voters agreed with Frey on the policing question, but they left the mayor guessing until Wednesday about his own reelection.

With voting nearly complete Tuesday, Frey had about 43% of the vote, well ahead of a pair of challengers running at about 20% each. But he needed more than 50% to win, and under the city’s ranked-choice voting system, election officials were to begin sorting second- and potentially third-place choices on Wednesday to allocate them to candidates.

Frey, a Democrat in a liberal-dominated city, faced sharp pressure from competitors on his left flank. Seventeen candidates had entered the race for mayor, many taking issue with the way Frey has handled changes to the police department since George Floyd was killed by a Minneapolis officer last year. Frey positioned himself as a defender of keeping the police department — and was against the most liberal and vocal progressives who were seeking a symbolic victory in Floyd’s city.

Voters soundly defeated the proposal to replace the police department, with about 56% opposed.

Just a handful of candidates were thought to be serious threats to Frey, with two — Sheila Nezhad and Kate Knuth — teaming up on a strategy that urged voters to leave Frey off their ballots entirely.  Nezhad had 21% of the vote Tuesday night, with Knuth a step behind at about 18.5%.

Nezhad, 33, is a community organizer who worked as a policy analyst for one of the leading groups out to eliminate the police department. Knuth, 40, is a former state representative and environmental justice activist. Both women also supported rent control, another proposal on Tuesday’s ballot, in contrast to Frey’s general opposition.

Under the ranked-choice system, candidates with no chance to win after the first round of counting are eliminated. A voter who backed such an unsuccessful candidate would then have his or her second choice tabulated, presuming that candidate remained in the race. The process is repeated until a candidate is declared the winner.

Frey late Tuesday called it “a really good night” but stopped short of claiming victory. If he remains in office, he stands to benefit from voters’ approval of another ballot question Tuesday — one that moves the city to a strong-mayor form of government. Critics have long said the city’s weak-mayor system sometimes meant confusion over who has clear authority over city departments and staff.

Frey was the face of Minneapolis during some of its darkest days, including Floyd’s death and the rioting that marred protests that followed, including the burning of a police precinct after Frey ordered officers to abandon it. Floyd’s death in May 2020 sparked the most widespread unrest in the U.S. since the Rodney King riots.

During the worst of the unrest, conservatives accused Frey of failing to stem the riots or crack down on soaring crime and gun violence while the left criticized him for not doing enough to overhaul Minneapolis police.

Frey, a lawyer by training and a Virginia transplant, first won a City Council seat in 2013. He ascended to the mayor’s office in 2017 by ousting incumbent Betsy Hodges in a race also roiled by police accountability issues, including the 2015 shooting of Jamar Clark, a Black man, in a struggle with white officers and the 2017 shooting of Justine Ruszczyk Damond, a white woman, by a Black officer.