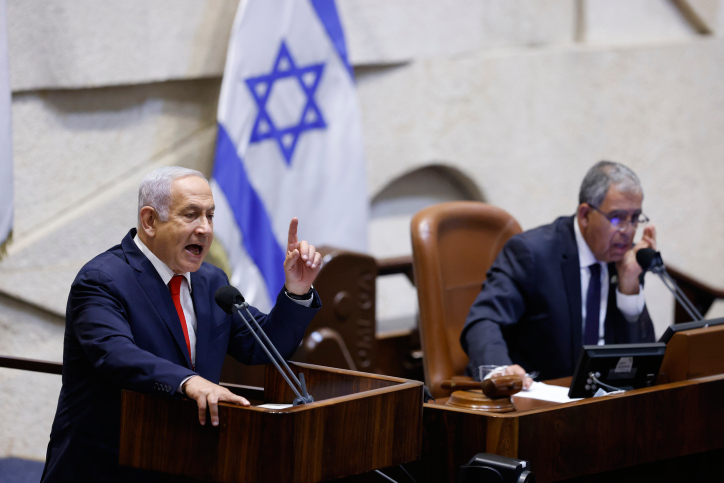 As a vote on the proposed state budget—a do-or-die test of the Bennett-Lapid coalition—approached on Wednesday evening, angry speeches and walkouts were already on display.

With no less than 780 separate votes on various clauses in the budget and dozens of reservations submitted by opposition MKs, the grueling process was expected to go on until Thursday evening at least.

“We have exhausting days and all-nighters ahead of us in the Knesset, but the budget will pass,” Bennett declared.

He started the proceedings by reiterating the theme of the past several months, saying that his government has succeeded in presenting a budget “after three and a half years of chaos, failed management and paralysis, years in which the country was a tool in a personal game, years of four election campaigns one after another at a dead end.”

“We are moving the country toward stability, but there are those who are pulling it into a mess, chaos, more elections and dysfunction,” Bennett said, referring to opposition efforts to torpedo the budget by persuading certain coalition members to vote against it.

Shas MK Moshe Abutbul made meowing noises and pulled out a cat doll to illustrate opposition to the allocation of millions of shekels for taking care of stray cats, a pet object of ridicule in recent weeks, which was included in the budget while people were being taxed for plasticware and grape juice. Abutbul was expelled from the plenum.

Opposition leader Binyamin Netanyahu denounced the budget as the work of a “government of lies,” which had promised no new taxes but will raise the cost of living for Israelis. He cited new taxes and economic edicts that will hurt lower-income earners while benefitting the rich.

“This government must fall,” Netanyahu inveighed, noting reports that Palestinian leaders have urged Arab MKs to vote for the budget pass to ensure Bennett remains PM.

“The Palestinians know that from Bennett and Lapid they’ll get whatever they want, and what they want is bad for Israel,” he said.

At a Yamina party meeting earlier, Bennett raged at Likud’s “hypocrisy,” asserting that it had also courted the Islamist Ra’am party, as its leader Mansour Abbas said on Tuesday, but denies it and now attacks it after it joined the coalition.

“I was there in the closed rooms” where a Netanyahu government-backed by Ra’am was discussed, he said. “That was the only deal [on the table].”

Naftali Bennett condemned what he termed a disinformation campaign charging that money from the budget will be funneled to Hamas through Ra’am.

“I’m stating the obvious here — there is not a penny from the state budget that is going to Gaza or Hamas… It’s a straight-out lie.”

He predicted that the opposition will “weaken considerably” once the state budget is passed.

Finance Minister Avigdor Liberman blamed the delay of 3.5 years in passing a budget on “the personal interests of one man, who was willing to sacrifice Israel’s economy” for that interest — a reference to Netanyahu, who allegedly instigated a stalemate with his coalition partner at the time, Benny Gantz, which blocked presentation of a budget.

After repeatedly interrupting Liberman, calling the coalition “Bolsheviks,” Likud MK David Amsalem was escorted out of the chamber.