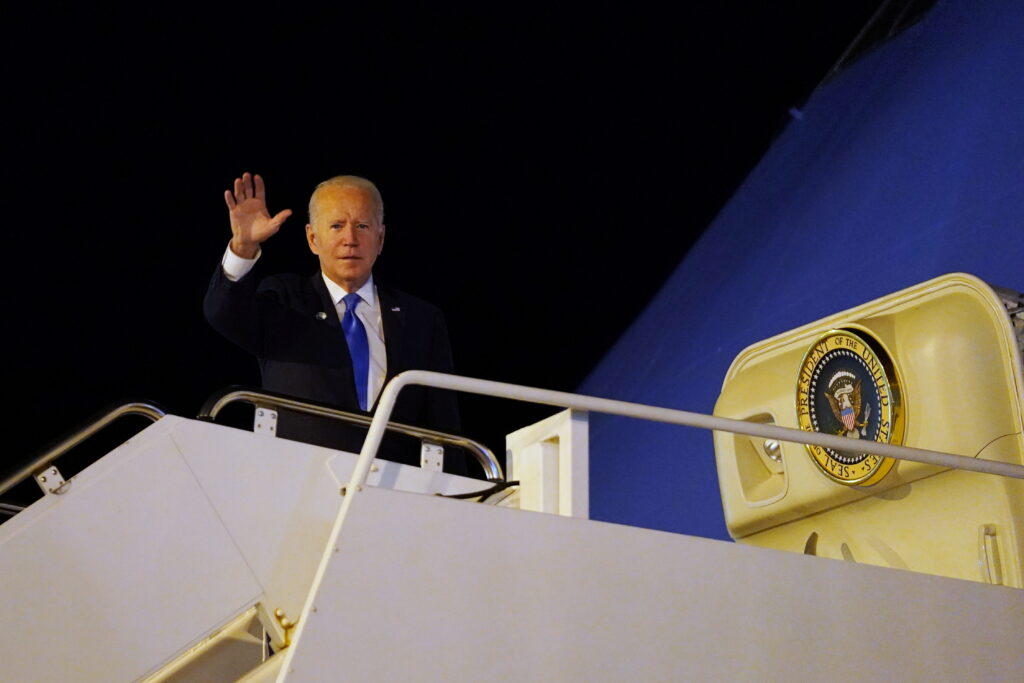 President Joe Biden returned to the United States early on Wednesday to a sobering defeat for Democrats in Virginia’s gubernatorial election and increased pressure to get his social and climate spending agenda through Congress.

In Virginia’s closely watched election for governor on Tuesday, Republican newcomer Glenn Youngkin defeated Democrat Terry McAuliffe in a state Biden won by 10 points in the presidential election a year ago.

The loss raised red flags for Democrats over midterm elections in November 2022 that could see them lose control of Congress, making it tough for Biden to advance his agenda in the second half of his presidency.

Republicans have not won a statewide race in Virginia since 2009. That win foreshadowed congressional election results the following year, in which Democrats lost control of the House of Representatives when Biden was vice president.

Republicans waged a cultural war against “critical race theory,” a concept taught mostly in law schools and universities that maintains racism is ingrained in U.S. law and institutions and that legacies of slavery and segregation have created an uneven playing field for Black Americans.

Democrats, who sought to link Youngkin to former President Donald Trump, now believe it is critical that Biden seal the deal on his spending package to garner support for their party, which controls the White House and both chambers of Congress.

Biden must bring feuding Democratic progressives and moderates together on the $1.75 trillion social safety-net spending plan and a $1 trillion infrastructure bill.

The President spent his nearly week-long overseas trip trying to reassure world leaders in Italy and Scotland that the United States was still a reliable partner after the acrimonious style of his Republican predecessor Trump.

Biden left the country last week after announcing a framework deal on legislation, signaling an end to months of infighting. But on Monday, Democratic Senator Joe Manchin, who has been at odds with most of his party during the negotiations, said he could not promise a yes vote.

“I believe that Joe will be there,” Biden told a news conference before he left the Glasgow climate conference on Tuesday. “I think we’ll get this done.”

Democrats are looking uneasily at Biden‘s declining approval numbers, which could hurt midterm candidates and may have affected the Virginia race. Reuters-Ipsos’s latest polling shows just 44% of Americans approve of Biden, down from nearly 60% early in his presidency.

“It would be catastrophic for us not to start passing some legislation immediately,” said Democratic strategist Bud Jackson.

“I’m confident that if we can get this stuff passed, the economy starts to turn around and the supply chains improve, there are opportunities for Biden‘s poll numbers to improve. But they’re not going to recover until we get this passed,” he said.

Manchin’s concerns have confounded progressives who frequently point out how popular elements of the social spending plans are with voters, as is the overall plan.

A new Reuters-Ipsos poll, conducted Friday to Monday, found that 51% said the Democratic-led plan would affect them personally in a positive way, while 26% said it would have a negative impact.

Overall, 56% said they supported the plan as they understood it, while 29% opposed it. Some proposed elements of the plan are even more popular, including expanding the Medicare healthcare program for seniors and offering universal prekindergarten.

Democrats inched closer to a deal on Tuesday, agreeing to measures they say will lower prescription drug prices, a top wish for many voters.

While abroad, Biden succeeded, along with the European Union, in getting more countries to join a pledge to cut methane emissions. But a promise that the United States would cut its greenhouse gas emissions in half by 2030 compared with 2005 levels was undermined by his Democratic Party’s inability to pass climate-related legislation at home.

Larry Sabato, director of the University of Virginia Center for Politics, said the Virginia results flag trouble ahead.

“People want COVID solved, supply chains solved, inflation solved, other economic problems solved,” he said. “They haven’t seen what they expected to see, which was a very competent president putting a check mark next to each problem as he solved it. That’s what people were expecting after Trump.”