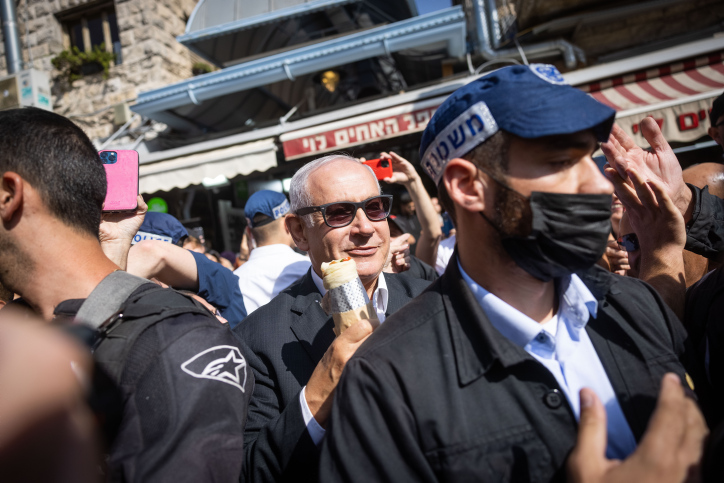 If elections were held today, the government coalition would lose its majority, but the Likud, led by Binyamin Netanyahu, though stronger than before, would still lack enough partners to form a new government, according to a Channel 13 poll aired on Monday night.

The Bennett-Lapid coalition would get 56 seats, down from their current 61, which currently gives them a bare one-vote majority in the Knesset.

Netanyahu’s right-wing-chareidi bloc would also get 56 seats. The predominantly Arab Joint List would hold the balance of power.

The remaining 8 seats would belong to the Joint Arab List, which has to date stayed outside the coalition, though not allied with the opposition.

Besides a significant gain for Likud (currently at 30), Merav Michaeli’s Labor party would see double digits for the first time in years. On the other hand, Justice Minister Gideon Saar’s New Hope, made up largely of Likud defectors, appears headed for oblivion.

(Ironically, Saar is the author of a draft bill to ban anyone under indictment from forming a government, which is apparently aimed at stopping Netanyahu, on trial for corruption, from making a comeback; yet, if the poll is predictive, Saar wouldn’t be in the government either.)

Not surprisingly, the approval rating for the Bennett-Lapid coalition was lukewarm: 51% of the public wants the current coalition to continue, 40% want elections now, and 9% do not know. It seems that abhorrence of another election has diminished since the spring.

The poll said also that 63% of the public do not want the chareidi Shas and United Torah Judaism (UTJ) parties to join the government after the budget passes, while 20% do.