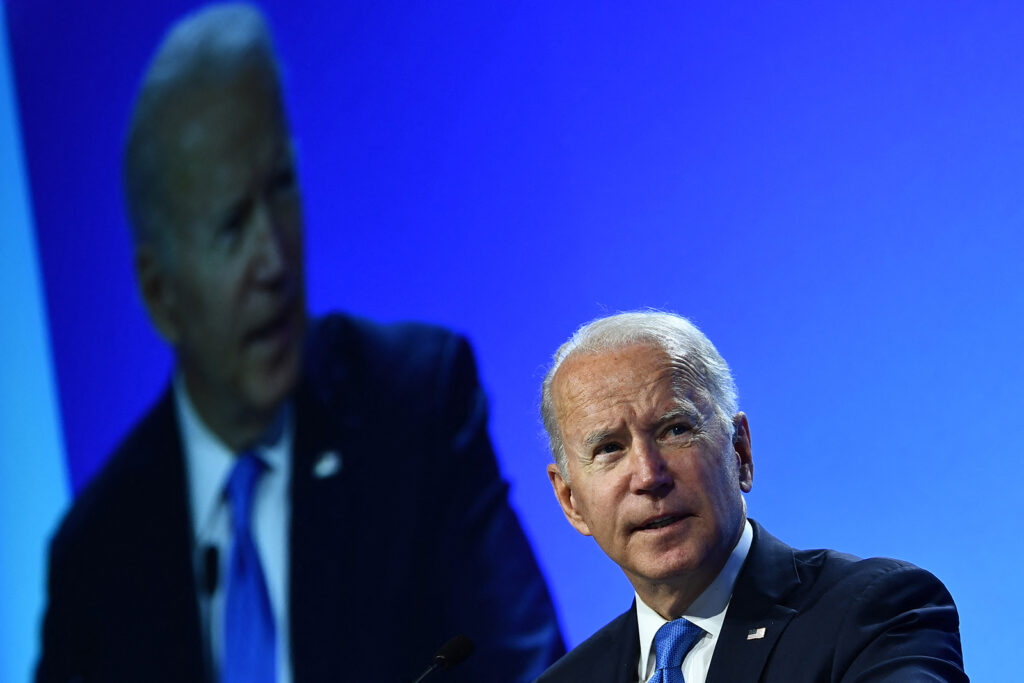 The Biden administration announced on Tuesday plans to crack down on emissions of methane, a greenhouse gas many times more potent than carbon dioxide.

The announcement came on the president’s last day at the United Nations climate summit in Scotland as world leaders unveiled an international agreement to sharply curtail methane emissions. Brokered by the United States and Europe, the agreement would require countries to cut emissions by a least one-third below 2020 levels by the end of this decade. So far, almost 100 countries have signed the pledge.

In a brief speech Tuesday, Biden called on countries to “go beyond” the agreed-to reductions and urged more to sign on. “There are more that can join — and should,” he said.

China, Russia and India, which among the world’s top methane-emitting countries, have not joined the pledge. Neither Chinese President Xi Jinping nor Russian President Vladimir Putin is attending the conference in person. Both sent envoys.

“We cannot wait until 2050; we have to cut emissions fast. And methane is one of the gases we can cut fastest,” she said. If countries fulfill their promises, she said, the additional pollution cuts that often accompany methane emission reductions could prevent 200,000 premature deaths and hundreds of thousands of asthma-related hospital emissions.

The Biden administration’s proposed rule follows weeks of increasing frustration for the White House as Democrats in Congress struggle to bridge differences over climate and social policies. These disagreements have left Biden without a major legislative victory at home as he presses for increased action on climate change internationally.

At the center of the administration’s plans is a new, long-expected rule from the Environmental Protection Agency that would, for the first time, crack down on methane emissions from about a million oil and gas wells across the country.

Some methane emissions occur naturally. But their largest industrial source in the U.S. is the nation’s oil and gas industry. Its main trade group, the American Petroleum Institute, supported the Trump administration’s decision to roll back methane-emission rules, though those regulations were later reinstated by Congress.

But even the current regulations apply only to newer wells drilled or modified after 2015, leaving more than 90% of the nation’s wells unregulated. The new rule would expand those regulations so that methane leaks from both old and new sources are covered.

Under the administration’s proposal, the EPA could continue to regulate emissions from new wells. Meanwhile, states would be required to develop their own methane rules for older wells that are in line with federal guidelines.

Calling the proposed rule a “historic action,” EPA Administrator Michael Regan on Tuesday said it would “ensure robust and lasting cuts in pollution across the country.”

“As global leaders convene at this pivotal moment in Glasgow for COP26, it is now abundantly clear that America is back and leading by example in confronting the climate crisis with bold ambition,” Regan said in a statement referring to the U.N. summit. The conference is scheduled to last two weeks, long after Biden and other government leaders return home.

According to the EPA, the new rule, which would be established under the Clean Air Act, would reduce methane emissions by 41 million tons from 2023 to 2035, the equivalent, in terms of environmental harm, of 920 million metric tons of carbon dioxide. That’s more carbon dioxide than was emitted by all American cars and commercial aircraft in 2019.

That level of impact is possible because of methane’s potency. A main component of natural gas, methane is 80 times more effective than carbon dioxide at trapping heat in the atmosphere during the first 20 years after it’s released.

Scientists have estimated that methane is responsible for about one-third of human-caused global warming. They have said that reducing methane leaks — as well as the venting and “flaring,” or burning off, of natural gas from oil wells and refineries — could be one of the fastest ways to slow climate change.

Clamping down on methane flaring and leaks from oil wells and gas pipelines — the focus of the Biden plan — is considered one of the easiest ways to cut emissions. But reducing methane from agriculture, in particular by belching cows, is a trickier matter.

The Biden administration is also targeting methane emissions through regulations proposed by agencies other than the EPA.

The Transportation Department is preparing to tighten methane regulations governing the nation’s oil and gas pipelines. The Interior Department is working on rules that would limit companies’ ability to burn off natural gas at drill sites on public lands. And the Agriculture Department plans to mitigate global warming by paying farmers to store carbon dioxide through better soil management and other techniques.