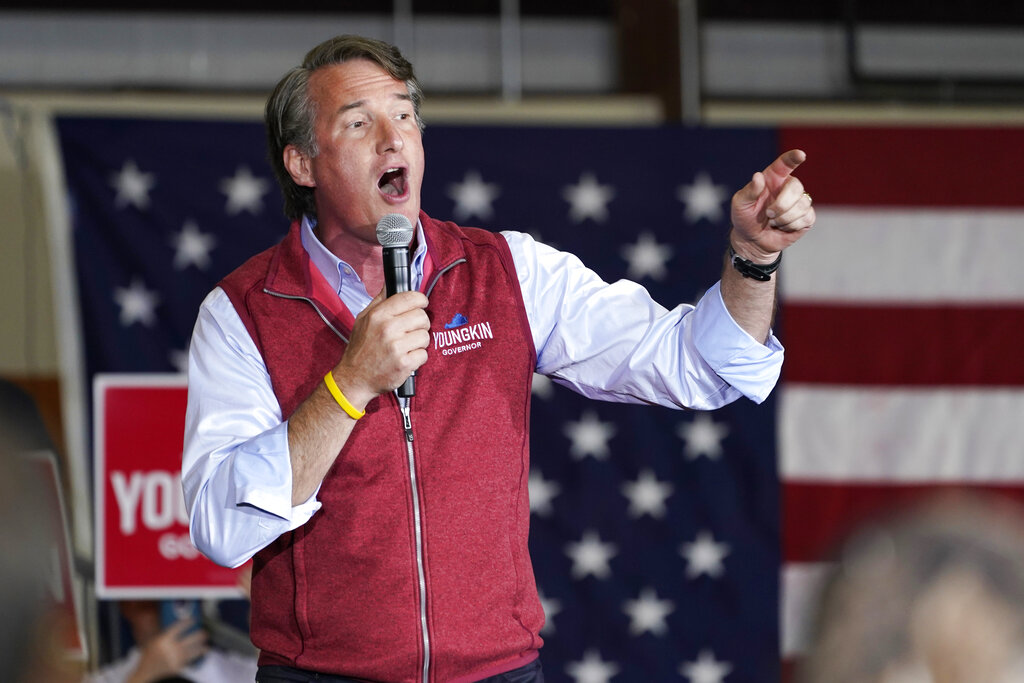 A closely contested race for governor in Virginia entered its final hours Monday with Democrat Terry McAuliffe and Republican Glenn Youngkin both hoping for last-minute momentum in a campaign that’s emerging as a referendum on Joe Biden’s presidency.

McAuliffe, who served as governor from 2014 to 2018, is scrambling to stave off disaster in a state that has become reliable Democratic territory in recent years. Biden carried Virginia by a comfortable 10 percentage points last year, but Youngkin’s campaign is optimistic about his prospects of becoming the first Republican to win a statewide race since 2009.

“This is a moment for Virginians to push back on this left, liberal, progressive agenda,” Youngkin, a former private equity executive, told a rally at an airport hangar outside Richmond.

Voters were also poised to decide a New Jersey governor’s race Tuesday, as well as mayoral elections in many of the nation’s top cities. Also, a ballot question that could remake policing in Minneapolis, after George Floyd’s death there last summer, could have national implications.

But the political repercussions were farthest reaching in Virginia, where McAuliffe again offered the message he’s repeated throughout the campaign — that his opponent will bring former President Donald Trump’s divisive style of politics to an increasingly blue state.

“I’m closing my campaign with you in Richmond,” McAuliffe said during his own swing through the state capital. “He is closing his campaign with Donald Trump. Really?”

That was a reference to the former president holding a Virginia tele-rally Monday night — though Youngkin himself doesn’t plan to participate.

Except for promises to safeguard “election integrity,” a nod to Trump’s lies about last year’s presidential race being stolen, Youngkin has done his best to eschew help not only from the former president but also most top national GOP leaders. Doing so has allowed him to court moderate Republicans and swing voters.

Another name not appearing on Tuesday’s ballot is Biden’s, but his approval ratings have fallen in recent weeks and his administration will likely get a lot of the blame nationally if its party doesn’t prevail in Virginia. The Democratic-controlled Congress has yet to approve a major public works bill or a sweeping spending package that would dramatically increase government support for the social safety net — providing still more potential political headwinds against McAuliffe.

Still, some Youngkin supporters credited their preferred candidate with keeping the race focused on Virginia, not Washington.

“He’s a straight shooter,” said Dan Maloy, a 53-year-old small business owner. “He cares about the issues that we care about. You know, it’s food on the table. What’s the cost of groceries? What’s the cost of gas? What do we need to do to move Virginia forward?”

Early voting in Virginia, which has been dramatically expanded during the past two years of unified Democratic control of state government, ended this past weekend. Legislation passed in 2020 eliminated the need to provide one of a certain number of limited excuses to vote absentee — allowing any qualified voter to cast a ballot starting 45 days before the election.

More than 1.1 million out of the state’s approximately 5.9 million registered voters cast early ballots. That’s down sharply from the 2.8 million early votes in last year’s presidential election but marks a dramatic increase when compared with about 195,000 early votes during the last gubernatorial cycle, before the voting reforms were instituted.

McAuliffe’s campaign has pointed to what it considered “strong” early voting numbers in blue-leaning localities, but also says it expects many Democrats to revert to their pre-coronavirus pandemic voting habits this year, preferring to cast in-person, Election Day ballots.

Republicans, despite generally opposing the Democrats’ election reforms, have also encouraged their supporters to vote early this year, and Youngkin’s team said it has seen encouraging signs. Virginia voters don’t register by party, so the partisan split of the early vote wasn’t clear.

Youngkin was appearing Monday night in Loudoun County, which encompasses Washington suburbs that have become the epicenter of parent activist groups who object to school curriculums that include instruction about institutional racism as “un-American.” He has made pledges to ensure parents have greater say in what their kids are taught a centerpiece of his campaign — possibly foreshadowing similar arguments GOP candidates will use across the country in races next year.

McAuliffe, who preceded Democrat Ralph Northam as governor in the only state that doesn’t allow its executive to serve consecutive terms, countered by accusing his opponent of using children “as pawns.” Polls began to tighten, however, after a late September debate when the Democrat said he didn’t think “parents should be telling schools what they should teach.”