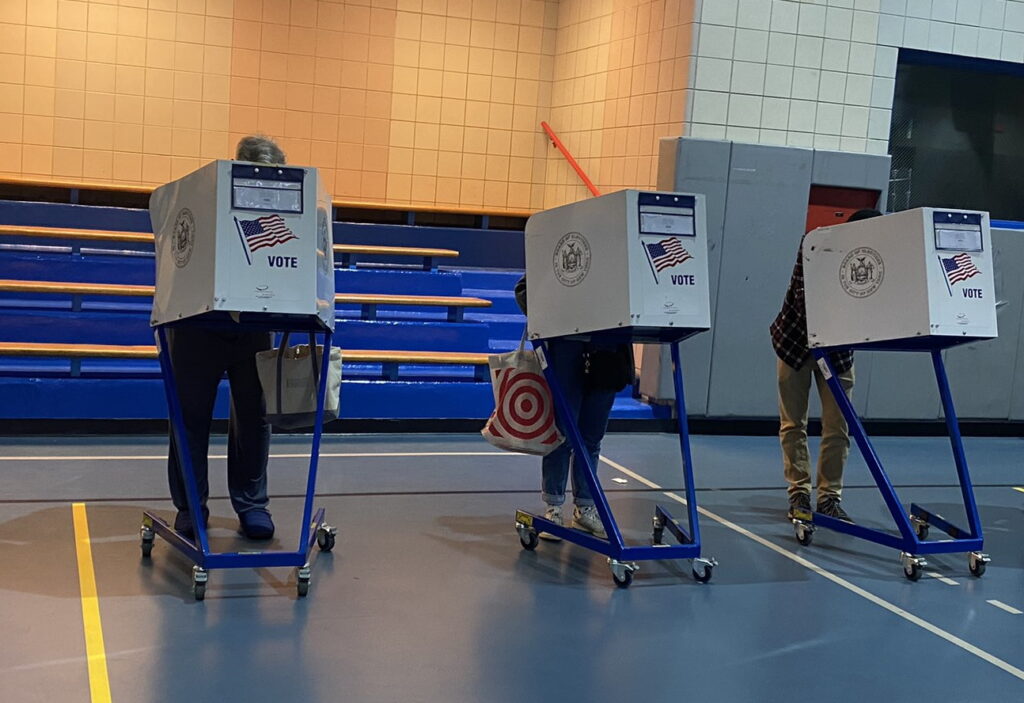 Political candidates made their final pitches to voters Monday in New York City as around the nation, a day before an Election Day that is expected to result in City Hall remain in Democratic hands and just a handful close City Council races.

Democratic mayoral candidate Eric Adams was leading Republican Curtis Sliwa by 36 points in a poll conducted late last month by Emerson College/PIX11/NewsNation. Adams won a crowded Democratic primary last June, the winner of which was expected to cruise to victory in a city where registered Democrats outnumber Republicans by 7 to 1.

During a rally Monday afternoon with labor unions at City Hall Park, Adams touted his own humble beginnings and concern for those struggling, saying “there’s this level of electricity and energy” around him and his campaign because, “If you’re a mother with a dyslexic child, you’re able to point to me and say, ‘Baby, you’re going to be alright, son.’ If you’re a mother that is visiting their child in Rikers Island that believes that at the end of the road they’re looking at my life of being arrested and saying, ‘You’re going to be alright, son.’ If you’re a mother that’s eking out pennies to pay your tuition because no one gave you a scholarship, you had to go to school at night like I did, they’re saying, ‘You’re going to be alright, daughter.’ If you are a mother that is on the verge of … losing your home, and believe that there’s no tomorrow and then you hear the story, the narrative of what my mother went through, you begin to feel different about yourself. The reason people are energized by this movement is because they see in me, the life I lived is the life they’re living,” said Adams, a former NYPD captain and state senator who is currently ending two terms as Brooklyn borough president. “No matter what happens to us, if we are committed and dedicated to each other, these hurdles are not insurmountable.”

Sliwa, a talk-radio host and founder of the Guardian Angels volunteer security organization, campaigned in Boro Park on Monday evening along with fellow Guardian Angels dressed in red berets and jackets, and spoke of the need to “resurrect” a city that has seen a recent surge in crime.

“Are you better off after eight years of Eric Adams as the borough president?” Sliwa asked the assembled Brookynites. “I can’t find one person to say, ‘Oh no, he was a great borough president.”

Adams supports vaccine mandates for city workers, though he said he would discuss and negotiate the matter with the labor unions. He has also said he would consider a mandate on schoolchildren once the vaccines are approved for them.

“People are no longer inhibited, they’re not frightened by corona … so why do we continue to promote fear, fright, hysteria and hype? Let’s try to get back to normalcy, let people live their way of life without imposing these draconian mandates.”

The Orthodox Jewish community typically supports conservative, law-and-order candidates, and Sliwa and his crime-fighting organization have cultivated relationships in the community over the past few decades. But Sliwa has come under sharp criticism in the community recently for comments he made in 2018 at a Reform Party meeting upstate, branding Orthodox Jews as welfare recipients because “I’m too busy davening all day, I’m studying Torah and Talmud,” and said the Orthodox communities “don’t vote the way normal Americans vote … they’re being told by the rebbi or rabbi, ‘This is who you vote for.’” Sliwa has since apologized for those comments.

Sliwa has also called for government regulation of yeshivah curriculum.

Adams, who also built a relationship with the community during his years as state senator and borough president, initially said he would enforce a government curriculum on yeshivos, but has since changed his tune, defending yeshivah independence.

While he has long been an advocate for racially sensitive police reform, Adams was among the most law-and-order candidates in the Democratic field, fighting progressive calls for defunding police and supporting a limited version of the stop-and-frisk tactic. Decades ago he was a registered Republican for several years and had praised former mayor Rudy Giuliani’s crime-fighting success.

Asked by a reporter for The Forward on Monday if he would consider the election a success even if he loses as expected, Sliwa replied, “Absolutely, because I have promoted the concept of ‘improve don’t move,’” noting that he got the idea from the Lubavitcher Rebbe, zt”l, who instructed his chassidimto remain in Crown Heights and not join white flight to other neighborhoods.

Adams declined to predict a margin of victory, telling a Hamodia reporter, “As long as it’s one. Listen, I’m not into these numbers. I just want to get a victory.”

Most of Tuesday’s other races — for positions like city comptroller and public advocate — aren’t in doubt.

Democrat Brad Lander, an outgoing City Councilman representing Park Slope and Boro Park, is viewed as a shoo-in in his election for city Comptroller. Public Advocate Jumaane Williams, a Democrat, is expected to cruise to victory in his re-election bid, though it is believed he will soon toss his hat in 2022 governor’s race.

There are also elections for all 51 City Council seats, of which only three are currently held by Republicans. Democrats are expected to win easily in the vast majority of races — a number of which they are running in unopposed — but several elections are expected to be competitive.

In the 48th Council district — which includes Brooklyn neighborhoods like Midwood, Madison and Manhattan Beach — Democrat Steven Saperstein is squaring off against Republican Inna Vernikov. Registered Democrats outnumber Republicans less than 2-to-1, and many voters register as Democrats only because most elections are decided in Democratic primaries. The district has typically voted for conservative Democrats in elections for the heavily Democratic City Council. But Republican Donald Trump got 65% of the vote in this district in the 2020 presidential election, and many political observers believe this race will be close.

Whoever wins will be among the most conservative members of the City Council. Saperstein himself has previously run political races as a Republican.

“As far as the candidates themselves, their views are almost identical,” one observer told Hamodia.

As the candidates engaged in a flurry of campaigning Monday, Saperstein told Hamodia, “I am the only candidate endorsed by the Flatbush Jewish Community Coalition and the police unions because based upon my reputation, work ethic and collaborative efforts across all party lines, I am fully trusted to help bring back law and order and stability to our community.”

Vernikov said, “By the clear groundswell of support in the district, I am the people’s candidate. On Election Day, vote your conscience. I will represent and fight for everyone in this district regardless of political affiliation.”

Currently, the Council has just three Republicans out of 51 members.

In the 43rd Council District, which includes Brooklyn neighborhoods Dyker Heights, Bay Ridge and Bath Beach, incumbent Democrat Justin Brannan is facing a challenge from Republican Brian Fox. If Brannan wins his election, he is expected to vie for the Council Speaker race.

The 50th Council District on Staten Island is also expected to have a tight race, for the seat being vacated by term-limited Republican Steven Matteo. Republican David Carr is facing conservative Democrat Sal Albanese — and Conservative candidate George Wonica, who may play spoiler, siphoning votes from Carr.

Election Day is the last chance for New Yorkers to vote: More than 169,879 already cast ballots during the early voting period, and many more are submitting absentee ballots.

New York has no statewide races, but there are five statewide ballot proposals,  related to issues including the environment, voter registration, absentee balloting, and redistricting.