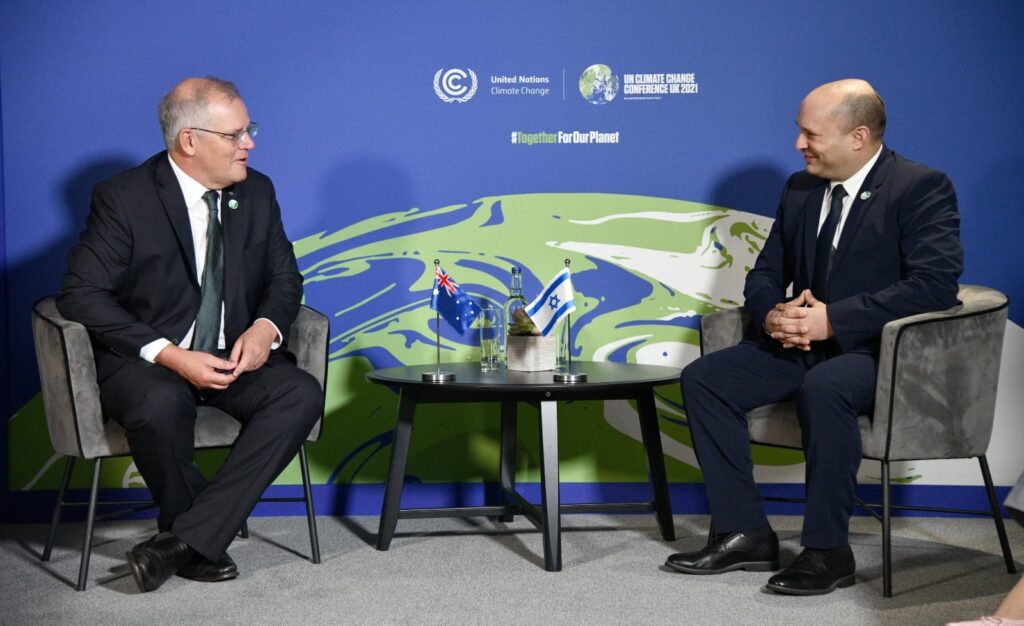 Prime Minister Naftali Bennett met with Australian counterpart Scott Morrison at the COP26 climate conference in Glasgow on Monday, where the two leaders spoke about the Iran threat in addition to climate issues.

“I’m looking forward to strengthening our relations and as you said, there’s a vibrant and a very lively Jewish community in Melbourne and Sydney,” said Bennett.

“We set our pledge to zero emissions by 2050. It ought not to be a political issue. It’s not between left and right. It’s really for our future and I think our unique contribution is not our footprint because we’re a pretty small country. It’s really harnessing the energy of ‘the start-up nation’ to saving the planet.”

Bennett urged Morrison to ensure that Australia pushes for a rebuke of Iran at the next IAEA Board of Governors meeting. Australia is one of the 35 board members of the U.N. atomic agency for 2021-2022.

Bennett also brought up the importance of recognizing Hezbollah as a terror organization. Australia currently recognizes only the Hezbollah External Security Organization as a terrorist group, and not the entire organization. In June, Australia’s Parliamentary Joint Committee on Intelligence and Security (PJCIS) recommended blacklisting all of Hezbollah.

The Prime Minister also invited Morrison for a visit to Israel.

The last time the two leaders spoke was in June, when Morrison called to congratulate Bennett on forming a coalition.