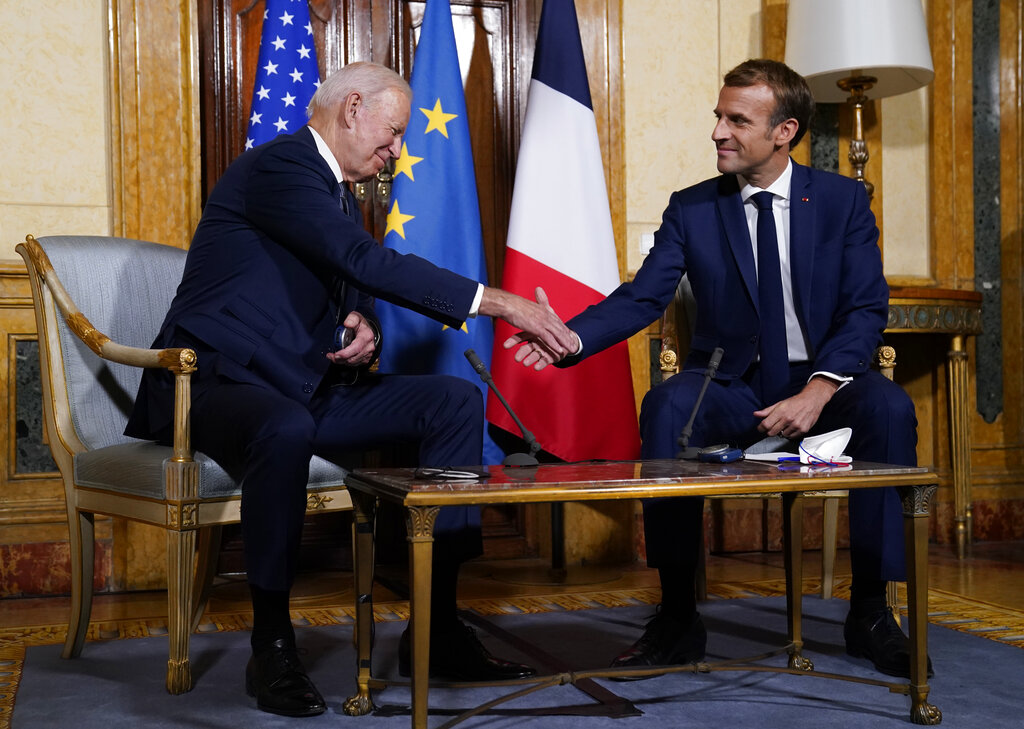 Working to patch things up with an old ally, President Joe Biden told French President Emmanuel Macron on Friday that the U.S. had been “clumsy” in its handling of a secret U.S.-British submarine deal with Australia, an arrangement that left France in the lurch and rattled Europe’s faith in American loyalty.

Biden and Macron greeted each other with handshakes and shoulder grabs before their first face-to-face meeting since the deal was publicly announced in September, marking the latest American effort to try to smooth hurt French sensibilities. Biden didn’t formally apologize to Macron, but conceded the U.S. should not have caught its oldest ally by surprise.

“I think what happened was — to use an English phrase — what we did was clumsy,” Biden said, adding the submarine deal “was not done with a lot of grace.”

“I was under the impression that France had been informed long before,” he added.

The U.S.-led submarine contract supplanted a prior French deal to supply Australia with its own diesel-powered submarines. The U.S. argued that the move, which will arm the Pacific ally with higher-quality nuclear-powered boats, will better enable Australia to contain Chinese encroachment in the region.

“We clarified together what we had to clarify,” he added, when asked if U.S.-France relations had been repaired. “What really matters now is what we will do together in the coming weeks, the coming months, the coming years,” he said.

To that end, Macron’s goal for the meeting was securing greater U.S. intelligence and military cooperation supporting French anti-terrorist operations in the Sahel region of Africa.

Biden and Macron also discussed new ways to cooperate in the Indo-Pacific, a move meant to soothe French tempers over being excised from the U.S.-U.K.-Australia partnership that accompanied the submarine deal. Other topics on the agenda include China, Afghanistan and Iran, as well as climate change, before next week’s U.N. climate summit in Glasgow, Scotland.

The French, who lost out on more than $60 billion from the submarine deal, have argued that the Biden administration at the highest levels misled them about the talks with Australia and even levied criticism that Biden was adopting the tactics of his predecessor, Donald Trump. France is especially angry over being kept in the dark about a major geopolitical shift, and having its interests in the Indo-Pacific — where France has territories with 2 million people and 7,000 troops — ignored.

The row challenged Biden’s carefully honed image of working to stabilize and strengthen the trans-Atlantic alliance after Trump’s presidency, as France for the first time in some 250 years of diplomatic relations pulled its ambassador to the U.S. in protest.

U.S. officials, from Biden on down, have worked for weeks to try to soothe tensions, though not so much for Biden to visit France himself to try to reset relations with Paris. Instead, he’s dispatched Vice President Kamala Harris for a visit in early November.

In a concession by the White House, the Biden-Macron meeting in Rome, ahead of this weekend’s Group of 20 summit, was organized and hosted by France at Villa Bonaparte, the French embassy to the Vatican, which Macron’s office called “politically important.” Meanwhile, First Lady Jill Biden was to host Brigitte Macron for a “bilateral engagement’ Friday afternoon.

Biden also praised France as an “extremely valued partner” and a “power in and of itself.”

“There is too much that we have done together, suffered together, celebrated together and valued together for anything to … break this up,” Biden said.

U.S. National Security Adviser Jake Sullivan said the two leaders would “literally cover the waterfront of issues facing the U.S.-France alliance,” including counterterrorism in the Middle East, China and trade and economic issues.

“We feel very good about the intensive engagement that we’ve had with France over the course of the past few weeks,” he added.

Following their meeting, Biden and Macron were expected to issue a joint statement outlining areas of mutual cooperation, including the Indo-Pacific and economic and technological cooperation.

While the U.S. focuses on Asia, Macron is seeking to bolster Europe’s independent defense capabilities, with more military equipment and military operations abroad.

France wants Western allies to “divide up roles” instead of competing against one another, and for the Americans to be “allies as loyal and as available for their European partners as always,” according to the top French official.