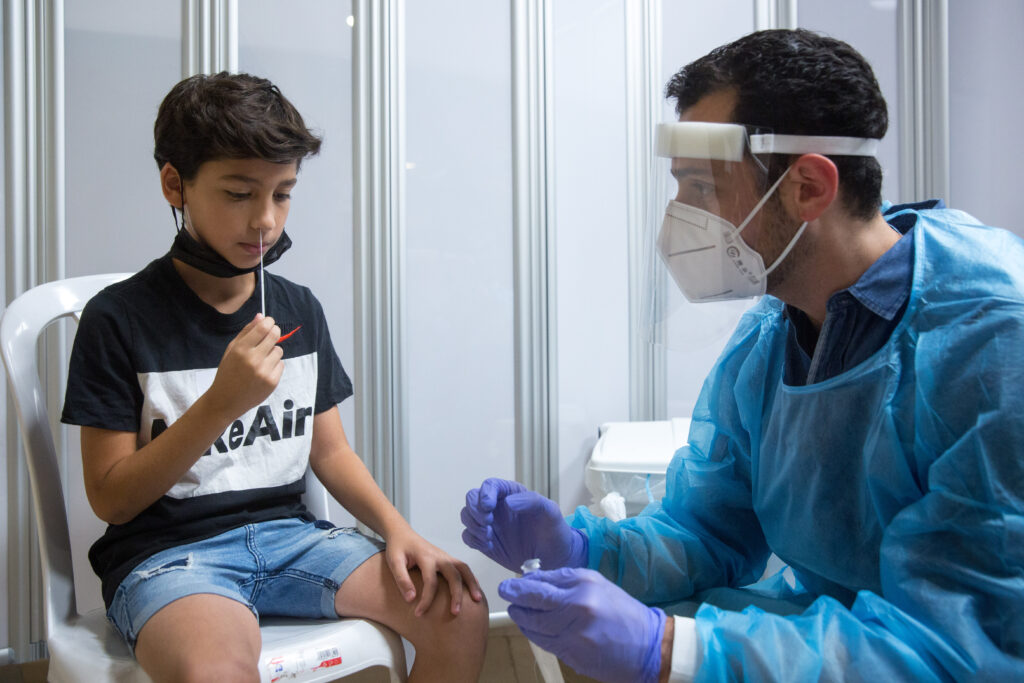 If this were December 2020, or August 2021, the argument for vaccinating young children against COVID-19 would be easy to make.

With case counts surging and hospitals near capacity, giving young kids a jab would be counted on to slow transmission of a virus that’s killing thousands of Americans a day. The risk that inoculation could cause heart inflammation in young kids appears to be minuscule. Countering the coronavirus would clearly win out.

But it’s late October 2021, and the virus appears to be in retreat. New infections and deaths have both plunged more than 45% since a surge in September. And after multiple waves of infections, more than 1 in 4 U.S. residents have likely battled the coronavirus and gained some immunity as a result.

All that is good news, but it also means that widespread vaccination of the nation’s grade-school population offers less of an upside than it would have before.

That makes it harder to say there’s enough to be gained by the shot to offset the theoretical possibility of heart risks — a downside that’s not yet been measured.

These are the calculations experts are trying to make as they decide whether Pfizer and BioNTech’s COVID-19 vaccine for kids ages 5 to 11 should be made available — and especially whether it should be recommended — for all 28 million U.S. children in this age group.

On Tuesday, the Food and Drug Administration’s panel of scientific advisers voted overwhelmingly to recommend that access to the vaccine be extended to families who want it for their young children.

But the panel also made clear it did not endorse the goal of vaccinating young children as quickly as possible. At this stage of the pandemic, there are just too many unknowns to support blanket vaccinations for all, several panel members said.

One uncertainty is whether prepubescent boys face the same risk of heart inflammation in response to the vaccine that has been seen in teen boys and young men.

Another is whether the Centers for Disease Control and Prevention are correct in estimating that at least 40% of elementary-school-aged children have already been infected and are now protected to some degree.

But the most intriguing uncertainty is state of the pandemic. Whether we are near the end of the outbreak or just resting between waves is an unknown with sweeping implications, the FDA advisers said.

“If trends continue the way they’re going, this may not be the emergency it is now,” immunologist Dr. James E.K. Hildreth said at Tuesday’s meeting.

The reservations expressed by Hildreth and others came after an FDA staff analysis showed that under some assumptions about a waning pandemic, vaccinating all children ages 5 to 11 could not be justified.

In a scenario in which hospitalizations dropped to 11,500 per day and new infections to 7,000, rates of hospitalization due to vaccine-induced myocarditis could exceed those prevented by the vaccine.

We’re not there yet. But if current trends continue, we could be soon.

Even if it is burning itself out, the pandemic continues to afflict Black and brown families disproportionately, said Hildreth, president of Meharry Medical College in Nashville, Tennessee. That’s reason enough to urge that parents get access to a COVID-19 vaccine for their young children if they want it, he said.

Dr. Michael Nelson, a University of Virginia immunologist who also serves on the FDA’s advisory panel, agreed that “providing a choice to a fully informed public is a pretty good path forward.”

He stressed that the panel’s support for authorizing the vaccine “is not a mandate” to inoculate all kids between ages 5 and 11.

Reflecting the blinking-yellow signals of his fellow panel members, University of Michigan epidemiologist Dr. Arnold Monto acknowledged he had “reservations” over “how groups we have no control over will act” if the pediatric COVID-19 vaccine is authorized for emergency use.

Key among those groups are politicians and public health officials, who have hinted at vaccine mandates for young children once the FDA makes the shots available.

President Joe Biden has encouraged governors, health care organizations and business owners to require COVID-19 vaccinations for adults as a condition of coming to work, attending public events, and eating and drinking in bars and restaurants.

The resulting mandates have caused a furious backlash across the country. Montana has barred vaccine mandates of any kind, and governors or legislatures in Texas, Georgia and several other states have acted to severely limit enforcement of mandates implemented by local authorities or private entities.

But those racing to immunize schoolchildren should be ready to acknowledge that younger kids are at lower risk of severe COVID illness than are adults, said Dr. Monica Gandhi, an infectious disease expert at UC San Francisco.

“The vote came in, and it was like, ‘Yay, we’ll be on fairgrounds vaccinating all the kids next week,'” she said.

In effect, while adults crowd into sports arenas, bars and restaurants to eat, drink and cheer unmasked, they are pushing for children get the vaccine before all of the safety concerns have been resolved.

“We are kind of asking children to take one for the team,” Gandhi said.

Dr. Rochelle Walensky, director of the CDC, pushed back against the suggestion that the need to get children vaccinated had passed.

CDC data presented at the FDA advisory committee meeting showed that COVID-19 now ranks eighth on the list of leading causes of death for children ages 5 to 11. Over the course of the pandemic, the disease has claimed the lives of at least 94 children in this age group.

And while hospitalizations among these young children have dipped in the last two weeks, they remain roughly as high as they were in the pandemic’s darkest days last winter.

The average daily death toll for Americans of all ages still tops 1,000, and a season of colder, drier weather may revive flagging transmission rates, Walensky noted.

“We must remain vigilant,” she said.