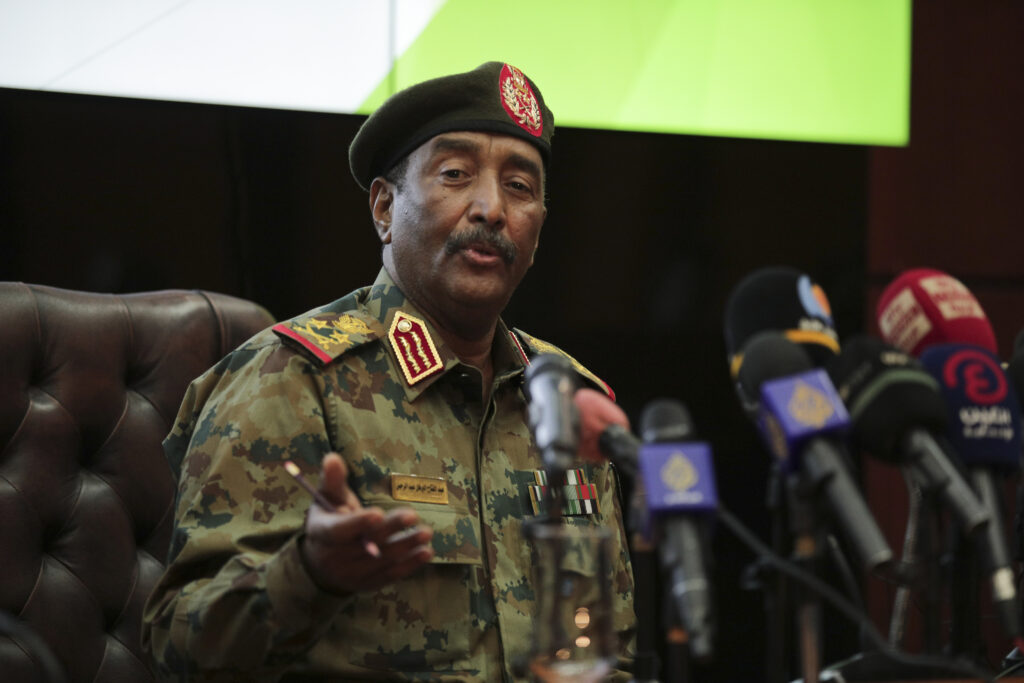 The general leading Sudan’s coup has vowed to usher the country to an elected government. But Abdel-Fattah Burhan has powerful allies, including Gulf nations and a feared Sudanese paramilitary commander, and he appears intent on keeping the military firmly in control.

Burhan first gained prominence in 2019, when he and other top generals toppled Omar al-Bashir, under pressure from mass demonstrations against the autocrat’s 30-year rule.

He remained in charge for several months, until international pressure forced the military to reach a power-sharing deal with the protesters. That established a joint civilian-military Sovereign Council headed by Burhan that was supposed to rule Sudan until elections, set for 2023.

Burhan’s record was relatively clean and he was not indicted by the International Criminal Court like al-Bashir and others for crimes against humanity during the Darfur conflict of the early 2000s. He was a rare non-Islamist among the top generals during al-Bashir’s military-Islamist regime. That helped Sudan emerge from the international pariah status it had under al-Bashir.

On Monday, Burhan swept away the vestiges of civilian government. He dissolved the Sovereign Council and the transitional government, detained Prime Minister Abdalla Hamdok and other officials, and declared a state of emergency. Hamdok was released Tuesday, but others remain in custody.

The takeover came just weeks before Burhan, 61, was scheduled to be replaced by a civilian as head of the council. He has promised that the military will hand over power once a government is elected in July 2023.

Civilian control would not only undermine the military’s political power, but also threaten its extensive financial resources and could lead to prosecutions for rights violations in the past 30 years.

Burhan has been backed in recent years by Egypt, led by a general-turned-president, and Gulf countries, particularly the United Arab Emirates. He trained in Egypt’s military college and has made multiple visits since 2019 to the Emirates’ de-facto ruler, Abu Dhabi Crown Prince Sheikh Mohammed bin Zayed Al Nahyan.

In a sign of the decisive behind-the-scenes role of Gulf countries, U.S. Secretary of State Antony Blinken spoke with the foreign minister of regional heavyweight Saudi Arabia about Sudan on Tuesday. A State Department statement said both men condemned the military takeover.

On Monday, Egypt and some of the Gulf countries had avoided criticizing the coup, calling instead for calm and dialogue.

“There’s a general preference for a strong military leader who is very transactional. That fits Gulf interests more than a democratic government,” said Cameron Hudson, a former U.S. State Department official and Sudan expert at the Atlantic Council’s Africa Center.

“They’re fearful of what an Arab Spring success story looks like,” he said, referring to the uprisings in 2011 that helped inspire the Sudanese protests.

Also standing behind Burhan is another general, one who is more feared: Mohammed Hamdan Dagalo, commander of the Rapid Support Forces — a paramilitary unit that grew out of the al-Bashir-backed Janjaweed militias notorious for atrocities during the Darfur conflict.

RSF fighters were prominent in Monday’s coup, taking part in arresting Hamdok and other senior officials and clamping down in the streets. The force is virtually a “de facto parallel army of tens of thousands of battle-tested fighters,” said Suliman Baldo, senior adviser at The Sentry, an investigative and policy group focusing on war crimes in Africa.

Burhan has a long connection with Dagalo, who is also known as Hemedti. Burhan was a commander in Darfur, where the military and RSF waged a brutal campaign to crush an insurgency, Baldo said. As many as 300,000 people were killed and 2.7 million were displaced.

In 2015, Burhan and Dagalo coordinated the deployment of Sudanese troops and RSF fighters to Yemen to fight with the Saudi-led coalition against Iranian-aligned Houthi rebels. Their forces received hefty payments from the Saudis and Emiratis, building those countries’ connections to the two commanders.

In the uprising against al-Bashir, Burhan and Dagalo refused orders to violently disperse the protesters and even met with them at their sit-in camp. Behind the scenes, Egypt, Saudi Arabia and the Emirates encouraged them to push out al-Bashir.

But protests continued after al-Bashir’s fall, with demands for the military to give up. On June 2, 2019, security forces and RSF fighters attacked the protesters. More than 100 people were killed. Prosecutors blamed paramilitary forces, but the bloodshed stained Burhan and Dagalo in the eyes of protesters.

“Burhan was responsible because he was the leader, it’s that simple,” said Osman Mirgany, a Khartoum-based columnist and editor of the daily al-Tayar. “He promised not to touch the sit-in and then a massacre occurred. From that point on, people realized he would never keep his promises.”

For the military’s opponents, that skepticism hangs over Burhan’s promises of civilian rule. Baldo, of the Sentry group, said the general and Dagalo are both intent on remaining free from civilian oversight.

Moreover, he said, they are “concerned about being held accountable for atrocity crimes committed under their command” — in Darfur and in the 2019 sit-in killings.