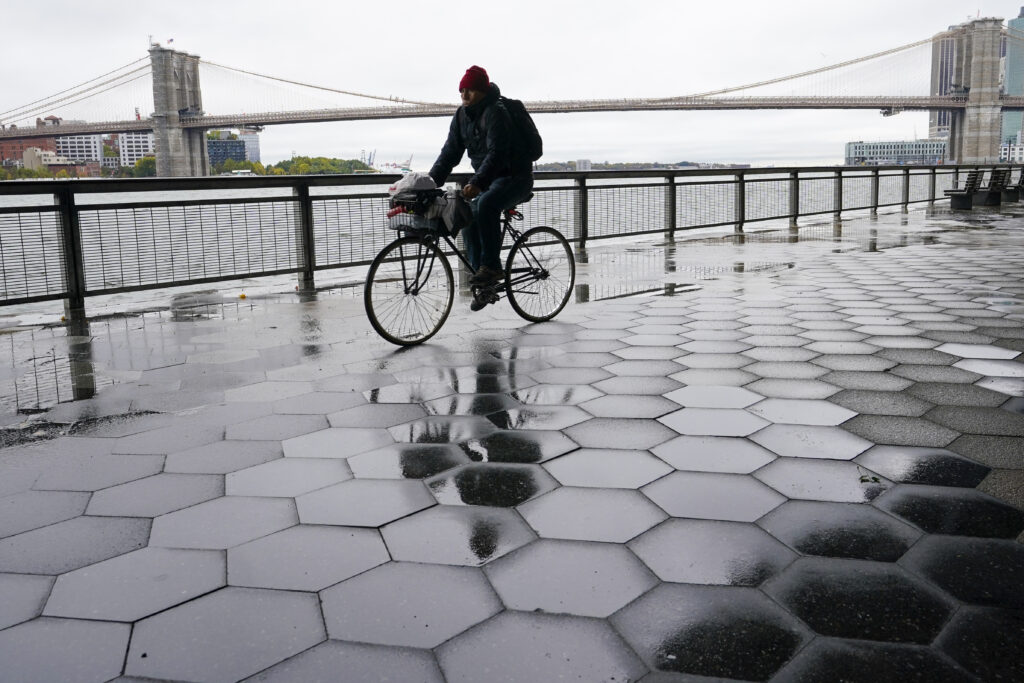 A nor’easter barreled up the U.S. coast Tuesday, and forecasters warned it could bring flooding, hurricane-force wind gusts and widespread power outages to New England.

The worst of the storm was expected to lash the region late Tuesday through Wednesday morning. Wind gusts as high as 75 mph were forecast on Cape Cod, with sustained winds as high as 45 mph. The National Weather Service warned that waves off the Massachusetts coast could reach 19 feet.

The Massachusetts Bay Transportation Authority suspended its ferry service Tuesday and Wednesday. In Salem, the town canceled ferry service to Boston, urging visitors to take a commuter train instead.

The early nor’easter arrives before many trees have shed their leaves for the winter, raising the risk for power outages as branches covered in wet, heavy leaves blow onto transmission lines. Eversource, a power company that serves much of New England, warned that widespread outages were possible through Wednesday.

In New Bedford, a COVID-19 testing operation closed early because of the storm, and residents were urged to secure outdoor furniture and bring pets inside.

The storm disrupted travel plans for some, like Pat Clarke, of Plymouth, Massachusetts.

“When we heard about the weather, we changed our minds and thought we’d better get home,” Clarke told NBC Boston. “There will be a lot of wind, rain and streets flooded and trees down, so here we are.”

The storm disrupted some flights, and federal officials warned about possible delays or cancellations.

The storm, which is expected to be felt as far north as Nova Scotia, drenched the mid-Atlantic earlier Tuesday, dropping nearly 5 inches of rain on parts of New Jersey. Strong winds were forecast for the area through Wednesday.

New Jersey Gov. Phil Murphy delayed the opening of state offices because of the wind and rain, calling the day “a wash out.” Rutgers University moved classes online for the day, and some colleges and schools canceled altogether.

New York and New Jersey had issued emergency declarations on Monday ahead of the storm, but there was little evidence of calamity as of late Tuesday afternoon.

In the waters off New York’s Long Island, the U.S. Coast Guard and local police searched Tuesday for a kayaker who did not return from a trip Monday night. He left a few hours before heavy rain started falling.

The storm arrives just weeks after the remnants of Hurricane Ida inundated the Northeast and caused deadly flooding.