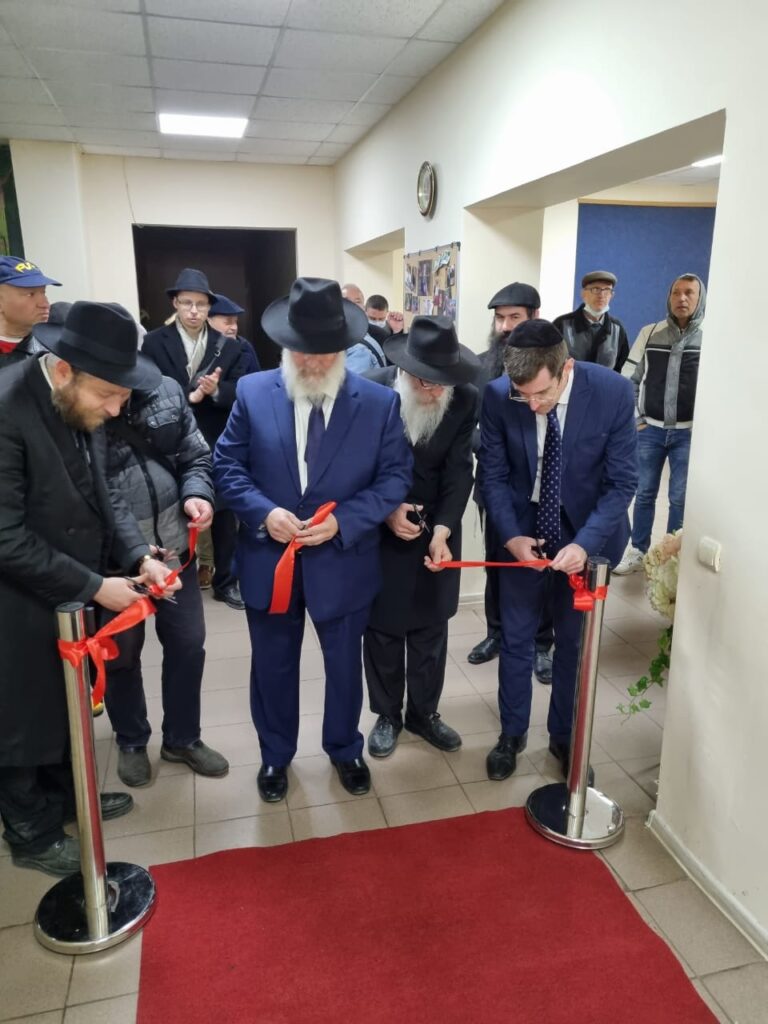 Four lending centers for medical equipment were inaugurated in the cities of Zhytomyr, Chernivtsi, Vinnitsa and the Anitevke town next to Kiev. Hundreds of thousands of dollars were invested in purchasing the medical equipment.

The inauguration of the centers took place in various cities with the participation of Rabbi Shlomo Wilhelm, Rabbi of Zhitomir and Western Ukraine, Rabbi Shaul Horowitz, Rabbi of Vinnitsa, and Rabbi Menachem Mendel Glitzenstein, Rabbi of Chernovich, all under the Federation of the Jewish Communities in the CIS, headed by the Chief Rabbi of Russia Rabbi Berel Lazar.

The centers were inaugurated during a tour of the Rabbinical Center of Europe delegation led by Rabbi Arie Goldberg, Director General of the RCE, Rabbi Yosef Bainhaker, Deputy Director General of the RCE, and Rabbi Avraham Abba Torezki, Secretary of the European Council. They expressed great admiration for the impressive development in activity of the educational institutions, schools and kindergartens in the various cities.

The European Chesed Center is an enormous project initiated by the Rabbinical Center of Europe, undertaking the opening of 50 centers for lending medical equipment in 50 cities in Europe. The project began at the outbreak of the COVID pandemic to assist European Jews in need of medical equipment. Each branch offers the communities medical equipment servicing all ages.

The project is a great relief for the Jewish communities in Europe, providing a necessary solution for Jews in need of medical equipment. The branches will operate under the responsibility and management of the Rabbis of the various cities. The project is part of the extensive activities of the Rabbinical Center of Europe that operates among European communities. Part of the extensive assistance to Rabbis and their communities in all Jewish areas include assistance in building mikvaos, training Rabbis, many varied educational projects, menorah distributions, parcel and matzah deliveries, and more.

The delegation visited the educational institutions in the various cities and took a close look at the extensive activities in the various cities. They were amazed at the development of communities where there are educational institutions and charitable activities, including relief kitchens, clothing distribution for those in need, food packages provisions and many other things. All the activities take place throughout the year under the umbrella organization of the Federation of the Jewish Communities of the CIS (FJC) headed by the city Rabbis.

The delegation ended the tour with an impressive visit to the village of Anitevke near Kiev, led by Rabbi Moshe Reuven Asman. The members of the delegation inspected the many activities in the Jewish community, which consists of dozens of families. The place has a long and impressive list of educational and charitable institutions.

During the tour and its events, memorial monuments were inaugurated for mass graves in the city of Vinnitsa and in the town of Chervoni near Berdychiv in memory of the Jews of the nearby cities who were murdered by the Nazis and their aides, buried alive in a mass grave. Rabbi Yisrael Meir Gabay, who heads the Ohalei Tzadikim Association, uncovered the mass graves hidden in the forests. Rabbi Gabay has been working on locating and rehabilitating Jewish cemeteries in Eastern Europe for many years.

Holocaust survivors and their descendants told hair-raising stories about the horrid cruelty and abuse of the Nazis and their aides when they led them tens of miles in the cold and snow, with the rest of their family. Among others, the son of a Holocaust survivor, Mr. Felix Zimmerman, told the story about his mother, Mrs. Rosa Roth, who saw how they killed her husband and little baby along with the rest of her family.

The Rabbinical Center of Europe took upon themselves the mission of erecting memorials for Jews murdered in the Holocaust and were not buried in a proper Jewish manner.

The memorial events were attended by large crowds with their leading Rabbis. All praised the special initiative of commemorating the Jews of the Holocaust who have no proper tombstone and expressed their appreciation and gratitude to the chairman of the Rabbinical Center of Europe, Rabbi Menachem Margolin, for his massive support for all the various projects.