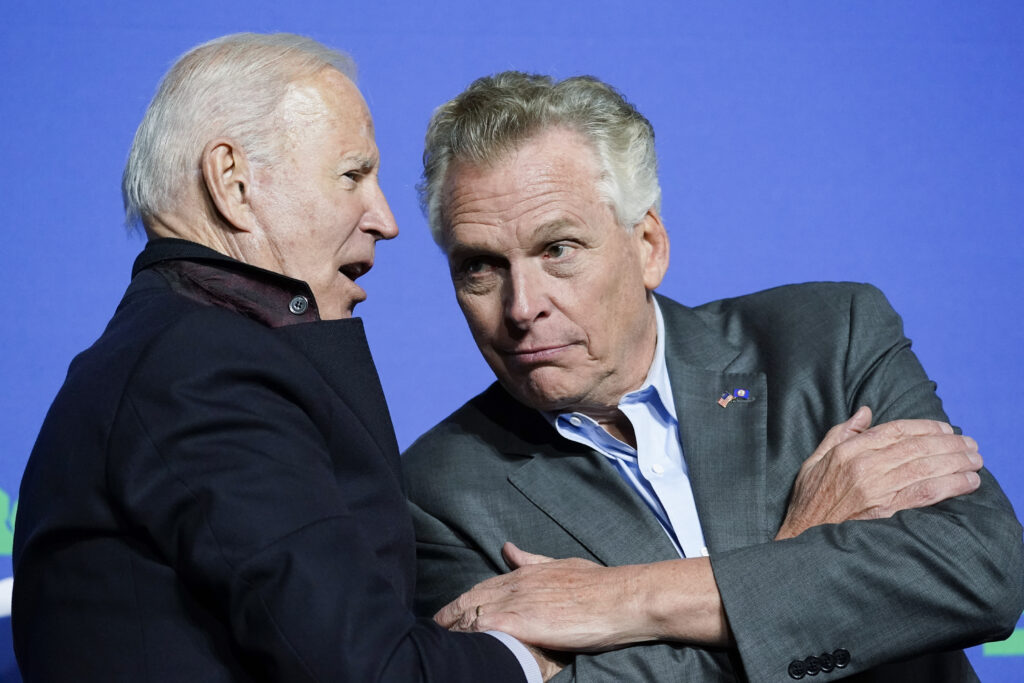 President Joe Biden framed the Virginia governor’s race as a repudiation of his predecessor, tying the Republican candidate to former President Donald Trump as he campaigned for Democrat Terry McAuliffe in what’s become a tight and increasingly bitter campaign.

No Republican has won statewide office in Virginia since 2009, and Biden carried it by a comfortable 10 percentage points in 2020. Yet polls have shown McAuliffe tied with Republican former business executive Glenn Youngkin with the election a week away — and the president’s own popularity is on the decline.

In the final days of the race, both candidates are focused on turning out their base supporters, with Republicans pressing culture war issues — prompting a debate over banning books in high school classrooms — and McAuliffe, who previously served as governor from 2014 to 2018, hammering Youngkin for his ties to Trump.

Biden drove that theme home during a Tuesday night rally in Arlington, just across the Potomac River from Washington, mentioning the former president by name more frequently than Youngkin and drawing a direct line from last year’s presidential race to next Tuesday’s election.

“I ran against Donald Trump and Terry is running against an acolyte of Donald Trump,” Biden said.

He charged that Youngkin “not only embraces some of the essential lack of character, he endorses Donald Trump’s bad ideas and bad record.”

“We have a choice: A path that promotes conspiracies, hate, division, or a path focused on lifting up every single Virginian,” McAuliffe said.

A loss by McAuliffe — or perhaps even a narrow victory — would be an ominous sign for Democrats already likely facing stiff political headwinds in next year’s midterm elections, when their narrow control of the House and Senate will be on the line. The party that wins the White House historically losses congressional seats in the next election, and Virginia, this cycle’s top off-year race, is seen as a key test of whether Democrats can head into 2022 with momentum.

How much help Biden will offer McAuliffe is unclear, though. The president has seen the percentage of Americans approving of his job performance fall after the chaotic U.S. withdrawal from Afghanistan, and amid an economy that remains far from fully healed as the nation continues to struggle with the coronavirus pandemic.

Youngkin has made defending “parental rights” in school classrooms a centerpiece of his gubernatorial run, and his campaign responded by noting that the bills McAuliffe vetoed had passed with Democratic support. It said that by accusing Youngkin of playing racial politics, McAuliffe was effectively leveling the same charge at his own party.

Republican National Committee Chairwoman Ronna McDaniel said Youngkin is “ensuring every Virginian has a say in their child’s education.”

“With an unprecedented amount of Republican enthusiasm, Virginians are ready to reject Terry McAuliffe and Joe Biden,” McDaniel said in a statement.

Biden made his second trip to Arlington since McAuliffe launched his gubernatorial bid. He’s the latest in a parade of Democratic stars to flood the state, hoping to fire up the party’s base.

Vice President Kamala Harris will campaign for McAuliffe on Friday, her second stop in as many weeks. In Dumfries, about 30 miles south of Washington last week, Harris called the race “tight” and warned against Democratic complacency.