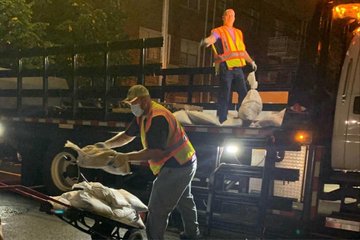 More than 4,500 people were without power in New York and New Jersey on Tuesday morning, after a nor’easter swept through the region.

Central Park saw 1.5 inches of rain, and Newark airport saw 2 inches, the New York Post reported. The storm, which is expected to last until Wednesday morning, could dump 2-4 inches of rain in the tri-state area and as much as 4-8 in the heaviest hit areas.

At his press conference on Tuesday, New York City Mayor Bill de Blasio said there had been 2-3 inches of rain so far and that winds had reached 37 mph.

“Hopefully, now, we’ve seen the worst of it, and in the next couple hours, the worst of the rain will pass,” the mayor said around 10 a.m. “But we are going to remain vigilant throughout.”

No weather-related subway service delays had been reported.

Con Edison reported 1,205 of its customers were without power for several hours; the majority of blackouts were in Queens and in Brooklyn. By 10 a.m. there were about 200 customers who were still without a power.

A little under 3,000 customers were without power in New Jersey.