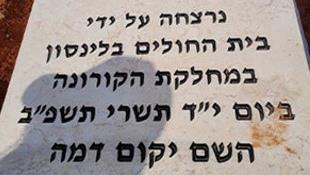 The text of the matzeivah of an unvaccinated woman who died last month of COVID-19 accuses the hospital in which she died of murdering her.

A photo of the woman’s matzeivah, in the Yarkon Cemetery in Petach Tikva, which was widely circulated in Israeli media earlier this week, shows the inscription claiming the woman was “murdered in the Beilinson Hospital coronavirus ward.”

In response to the circulation of the image, the hospital condemned the harsh and accusatory language.

“The hospital is shocked by the inscription on the gravestone and is disgusted by the severe and inciting words, which have no factual basis,” it said in a statement. Beilinson Hospital also said it was considering legal action.

The woman “arrived at the hospital unvaccinated after she was treated at home for a significant time,” said the hospital. “She was admitted with a heart attack and a pulmonary embolism and died of a serious case of COVID.”

The hospital said that the woman was treated by its coronavirus medical team “with endless devotion, with constant presence and dialogue with her family.” It said the message on the matzeivah is “slander that degrades the public and social discourse like never before.”

Over 75% of the Israeli COVID deaths have been among those over age 70.