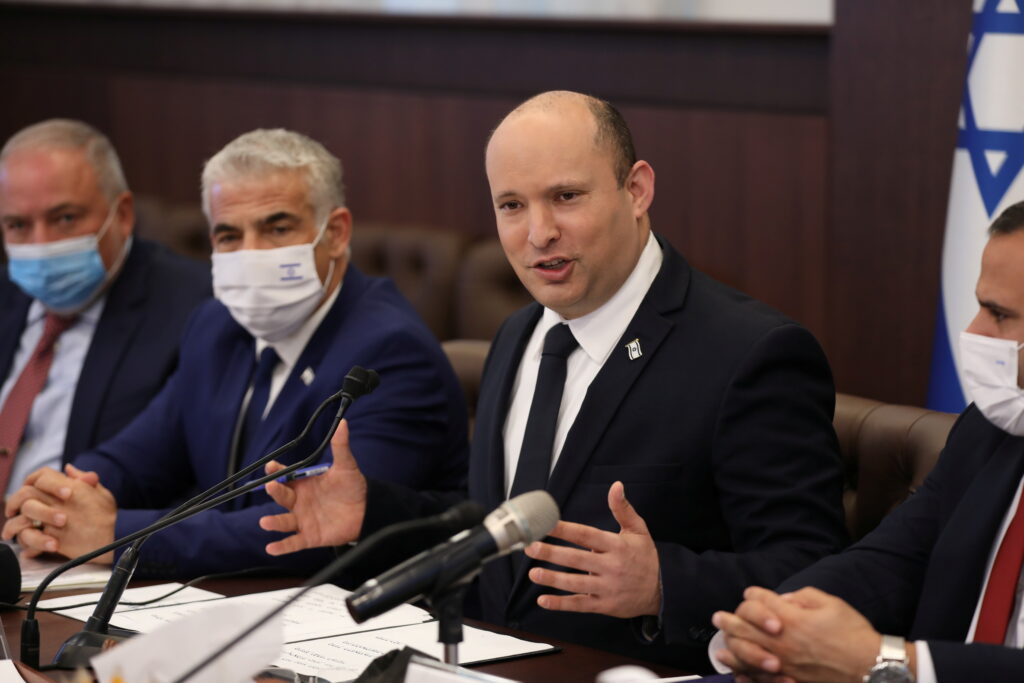 With less than three weeks remaining until the government must pass a national budget, a series of contentious issues and ministerial decisions are pitting Cabinet members from the left and right of the coalition against each other, threatening a crisis that could pull it apart.

The government formed in June pledged to only advance moves agreed upon by all of the coalition parties.

The coalition must pass a 2021 budget by Nov. 14, and Prime Minister Naftali Bennett and other ministers have warned against rocking the boat in the run-up to that vote. If the budget does not pass by the deadline, the coalition will automatically dissolve, triggering new elections.

But rifts centering around a number of measures taken by the new government regarding the conflict with the Palestinians have coalition parties on the left claiming they have been frozen out and warning of a looming confrontation.

In a clear sign of the increasingly public tensions, the management of the Meretz party published a statement Sunday night voicing “concern about a series of unilateral steps taken by Cabinet ministers regarding policies toward the Palestinians in the territories and settlement expansion.”

The statement said that “these steps endanger the future of the State of Israel and its diplomatic horizon, and they undermine the basis on which the change government was established.”

The statement referred to Friday’s blacklisting of Palestinian rights groups as terror organizations, as well as Sunday’s announcement of 1,300 new homes in Yehudah and Shomron.

On Friday afternoon, Defense Minister Benny Gantz announced that the six Palestinian civil society groups were being designated as terror organizations, asserting that they worked on behalf of the Popular Front for the Liberation of Palestine (PFLP) terror group.

Responding to the move, Health Minister Nitzan Horowitz, who leads Meretz, demanded clear evidence that the organizations were involved in terrorism.

“It is a very problematic matter,” he told Channel 13. “This complicates things for Israel internationally and I think we agreed in the coalition agreement to disagree on the matter of the territories, but that the situation there can’t be made worse.”

In a further strain on the coalition, Construction Minister Ze’ev Elkin announced Sunday the advancement of the construction of more than 1,300 homes in Yehudah and Shomron, the first declaration of its kind since President Joe Biden took office in January.

In response to Elkin’s announcement on Sunday, Meretz MK Mossi Raz posted his displeasure with the government and its treatment of the left-wing party.

“The Yamina government is disregarding Meretz,” wrote Raz. “It’s heading 10 degrees more to the right than the last government. Building in settlements outside of Israel harms Israel.”

In response, Elkin told Channel 13 news that Meretz should not expect him to abandon his principles.

“I am not imposing on Meretz people whether they go to meet [Palestinian Authority Chairman] Abu Mazen or not; I would behave differently. So they will of course not impose on me and force me to freeze construction in Yehudah and Shomron,” Elkin said.

According to Haaretz, during a meeting of the coalition heads on Sunday, Labor leader Transportation Minister Merav Michaeli and Meretz’s Horowitz demanded that Bennett freeze both Gantz’s and Elkin’s decisions, as well as a deal cut between residents of the Evyatar outpost and Israeli authorities.

In July, Israeli authorities agreed with the Evyatar residents that in exchange for them leaving the outpost, the buildings they put up will remain in place and the IDF will turn the area into a makeshift base. Searching for a long-term solution, the Defense Ministry is currently surveying the land to determine its status and see if it can be legally transformed into a formal settlement.

Michaeli told Bennett during Sunday’s meeting that the establishment of a new settlement on the land would constitute “a red line” for the Labor party.

Speaking to Kan News on Monday morning, Regional Cooperation Minister Issawi Frej (Meretz) said that the Evyatar outpost would not be legalized and that Meretz would not back down on its left-wing agenda.

“Regarding the Evyatar outpost — it will not be built and we have clarified that,” Frej said. “Meretz cannot come to terms with a government that builds in the territories and endangers the two-state solution.”

Bennett has in recent weeks repeatedly called on his coalition partners to keep the peace until the budget is passed.