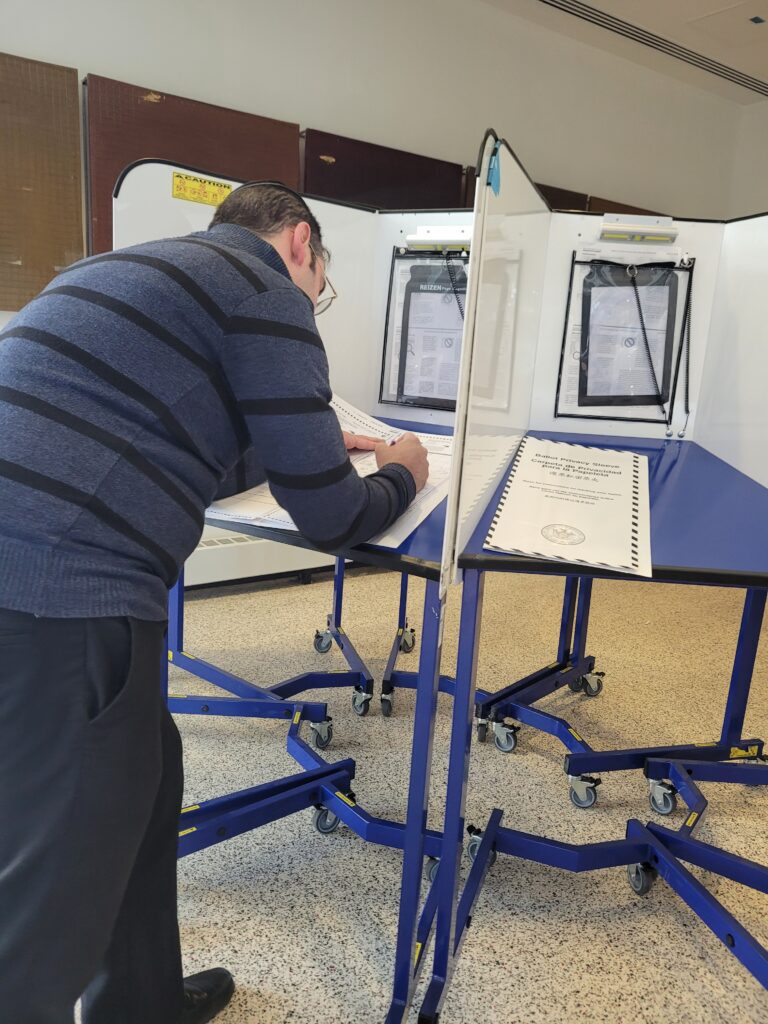 New Yorkers began casting ballots Saturday in elections for local and county offices in an early voting period that will run through Oct. 31.

In addition to deciding the next mayors of cities including Buffalo and New York, people will vote on five proposed constitutional amendments, including one to create a right to clean air and water, and two that would make it easier to vote.

Municipalities around the state have set up hundreds of early voting sites for this year’s contests, which include elections for school boards, district attorneys, county supervisors and a few vacant state legislative seats. People can also vote by mail or in person on Election Day, Nov. 2.

One proposed constitutional change on the ballot would remove a requirement that people must register to vote at least 10 days before an election. Doing so might allow the legislature to pass a law allowing people to register the same day they cast their ballot.

Voters could also remove a constitutional restriction that limits absentee voting to New Yorkers who are ill, have a physical disability or are outside the country.

Emergency rules during the COVID-19 pandemic have allowed any New Yorker fearful of getting the virus to vote by mail, but that expansion could go away when the threat is over.

Democrats say the voting reforms will boost turnout. Republicans have argued that New York should expand mail-in voting only if it boosts voter identification requirements.

New York could also join a handful of states that have passed constitutional rights giving people the right to a clean environment.

Supporters say the amendment will require the government to consider environmental effects early on in policy-making and allow New Yorkers to sue when it fails to do so. They also say it will help fight racism in government decisions about pollution and heavy industry.

Critics, including Republicans and the Lawsuit Reform Alliance of New York, say that the constitutional right will simply lead to a pile of costly lawsuits.

Another ballot measure would alter New York’s process of drawing the boundaries of congressional and legislative districts.

Among other things, it would limit the number of state senators to 63 and require New York to count incarcerated people at their last place of residence, rather than the place where they are imprisoned.

It would also change some deadlines for the independent commission that is supposed to draw up nonpartisan political maps and allow lawmakers to approve those proposed maps with a simple majority vote. Currently, a two-thirds vote is required if the Assembly and Senate are controlled by the same party.

Lawmakers could also reject the commission’s maps and pass their own maps with a 60% vote.

Republicans, as well as the League of Women Voters of New York State, have blasted the ballot measure for giving Democratic supermajorities too much power.

“Gerrymandering is a threat to our ability to hold meaningful and fair elections, and this proposal will undo everything voters have done to ensure that partisan political agendas do not sully our political process,” said Assembly member Jeff Gallahan, a western New York Republican.

This year, the commission at work at redrawing political districts based on new census data has yet to agree on maps. That suggests lawmakers could end up drawing the lines themselves.

In New York City, voters will choose a successor in the state Senate for Lt. Gov. Brian Benjamin, who gave up his seat to join Gov. Kathy Hochul’s administration.

While Democrats typically win general elections in New York City by large margins, one of the few close elections is expected to be for the 48th City Council District. Republican Inna Vernikov and Democrat Steven Saperstein are in  a competitive race for the seat that includes Brooklyn neighborhoods like Midwood, Madison, Sheepshead Bay, Homecrest, Manhattan Beach and Brighton Beach.