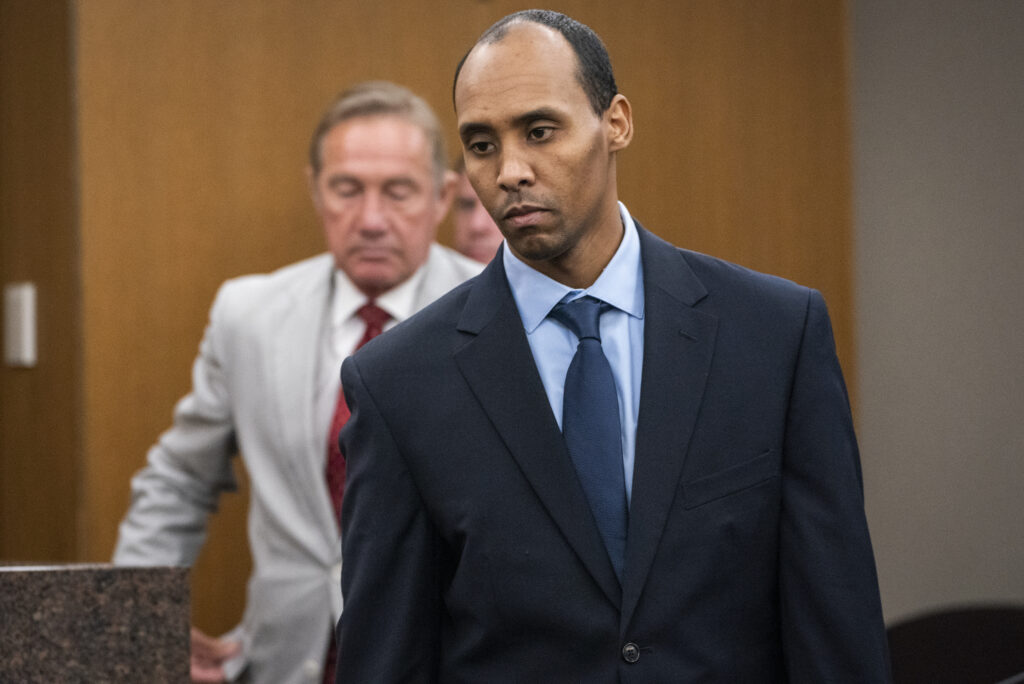 A Minneapolis police officer who fatally shot an unarmed woman after she called 911 was sentenced Thursday to nearly five years in prison — the maximum allowed for manslaughter after his murder conviction was overturned.

Mohamed Noor was initially convicted of third-degree murder and manslaughter in the 2017 fatal shooting of Justine Ruszczyk Damond, a 40-year-old dual U.S.-Australian citizen and yoga teacher who was engaged to be married. But the Minnesota Supreme Court tossed out Noor’s murder conviction and 12 1/2-year sentence last month, saying the third-degree murder statute didn’t fit the case because it can only apply when a defendant shows a “generalized indifference to human life,” not when the conduct is directed at a particular person, as it was with Damond.

Judge Kathryn Quaintance, who also presided at Noor’s trial, granted prosecutors’ request to impose the maximum sentence called for by state sentencing guidelines on Noor’s manslaughter conviction, 57 months. In doing so, she brushed aside the defense’s request for 41 months, which is the low end of the range. With good behavior, Noor could be freed on supervised release by next summer.

“Mr. Noor, I am not surprised that you have been a model prisoner,” Quaintance said. “However, I do not know any authority that would make that grounds for reducing your sentence.” She cited Noor “shooting across the nose of your partner” and endangering others the night of the shooting to hand down the stiffest sentence she could.

Noor, who was fired after he was charged, has already served more than 29 months. In Minnesota, inmates who behave well typically serve two-thirds of their prison sentences and the remainder on supervised release.

Noor testified at his 2019 trial that he and his partner were driving slowly in an alley when a loud bang on their police SUV made him fear for their lives. He said he saw a woman appear at the partner’s driver’s side window and raise her right arm before he fired a shot from the passenger seat to stop what he thought was a threat.

He was sentenced to 12 1/2 years on the murder count and had been serving most of his time at an out-of-state facility.

Noor’s appeal of his murder conviction was watched closely for implications in the case of Derek Chauvin, the Minneapolis police officer convicted of the same charge in George Floyd’s death. After the state Supreme Court overturned Noor’s third-degree murder conviction, experts said they expected the same eventual result for Chauvin but that it would likely have little impact because Chauvin was also convicted of a more serious second-degree murder charge in Floyd’s death. Chauvin was sentenced to 22 1/2 years.

Assistant Hennepin County Attorney Amy Sweasy, meanwhile, asked Quaintance to give Noor the longest possible sentence. She said the case “is worse than typical” because of who Noor is. “The most serious sentence this court can impose is required,” she said.

Damond’s parents, John Ruszczyk and Maryan Heffernan, also asked the judge to impose the longest sentence. In a statement read by prosecutors, they called Damond’s death “utterly gratuitous” and said that the Minnesota Supreme Court’s overturning of a “poorly written law” didn’t change the jury’s belief that Noor committed murder.

“Our sorrow is forever, our lives will always endure an emptiness,” they said.

Noor, wearing a suit and tie and donning a face mask, appeared impassive as the victim’s loved ones’ statements were read. He later addressed the court briefly, saying, “I’m deeply grateful for Mr. Damond’s forgiveness. I will take his advice and be a unifier. Thank you.”

Damond’s death angered citizens in the U.S. and Australia, and led to the resignation of Minneapolis’ police chief. It also led the department to change its policy on body cameras; Noor and his partner didn’t have theirs activated when they were investigating Damond’s 911 call.

Noor, who is Somali American, was believed to be the first Minnesota officer convicted of murder for an on-duty shooting.