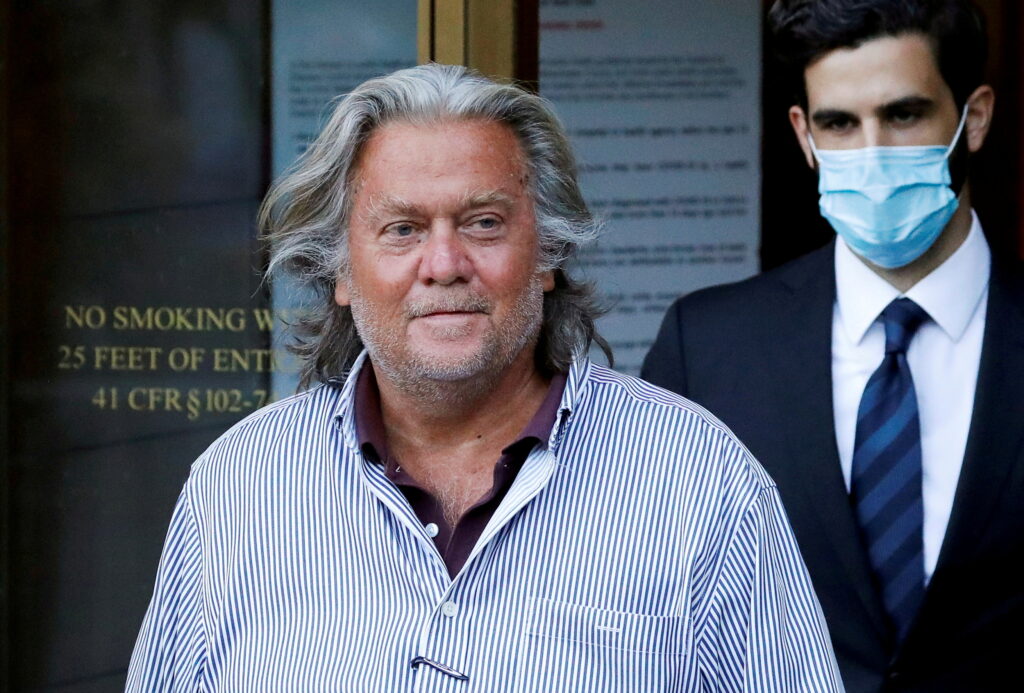 Longtime Donald Trump ally Steve Bannon could face criminal prosecution for refusing to cooperate with a probe into the deadly Jan. 6 attack on the U.S. Capitol after the House of Representatives voted Thursday to hold him in contempt of Congress.

The Democratic-led chamber voted 229 to 202 with nine Republicans joining Democrats to recommend the charges against Bannon, who served as an aide to the former Republican president.

The matter will now be referred to the U.S. Justice Department, where Attorney General Merrick Garland will make the final decision on whether to prosecute.

Bannon has refused to comply with subpoenas from the Jan. 6 Select Committee seeking documents and his testimony, citing Trump’s insistence – debated by legal scholars – that his communications are protected by the legal doctrine of executive privilege.

“What sort of precedent would it set for the House of Representatives if we allow a witness to ignore us?” Democrat Bennie Thompson, chairman of the Select Committee, said in debate before the vote.

The select committee voted unanimously on Tuesday in favor of the charges.

The Democratic-led panel hopes the threat of jail time – contempt of Congress carries a penalty of up to one year in prison and a $100,000 fine – encourages cooperation from the 18 other Trump aides and rally organizers who also have been subpoenaed.

Garland has yet to indicate how the department will respond. He told a House Judiciary Committee hearing on Thursday the department would “apply the facts” and make decisions “consistent with the principles of prosecution.”

Most of Trump’s fellow Republicans in Congress opposed even creating either an independent commission or a select committee to investigate the events surrounding Jan. 6. That day thousands of Trump supporters descended on the Capitol after he urged them in a fiery speech to protest his defeat by Democrat Joe Biden in a November 2020 election that Trump claims was stolen.

Only two Republicans – Representatives Liz Cheney and Adam Kinzinger – are on the nine-member select committee.

The contempt of Congress statute, passed in 1857, states that the Justice Department has a duty to bring a House contempt citation before a grand jury.

But the Justice Department historically has said it makes the ultimate decision about whether to prosecute individuals who defy congressional subpoenas. The last successful prosecution for contempt of Congress was in 1974 when a judge found Watergate conspirator G. Gordon Liddy guilty.

Asked about the vote at his weekly news conference on Thursday, Kevin McCarthy, the House Republican leader, said the subpoena for Bannon to testify was “invalid,” making the same executive privilege argument Bannon did.

The select committee argued that Bannon had made statements suggesting he knew ahead of time about “extreme events” that would take place on Jan. 6, when Congress was scheduled to certify Biden as the winner of the presidential election.

Bannon said on a Jan. 5 podcast that “all hell is going to break loose tomorrow.” The next day, mobs of Trump supporters, many chanting “Stop the Steal” and “Hang Mike Pence,” attacked the Capitol as Vice President Pence and lawmakers met to certify the election.

The assault forced the lawmakers, congressional staff and journalists to flee as crowds rampaged through the building, raiding offices, smashing windows and stealing computers and other equipment.

The vote certification was delayed for several hours, but went ahead – despite votes against it by nearly 147 Republican members of Congress.