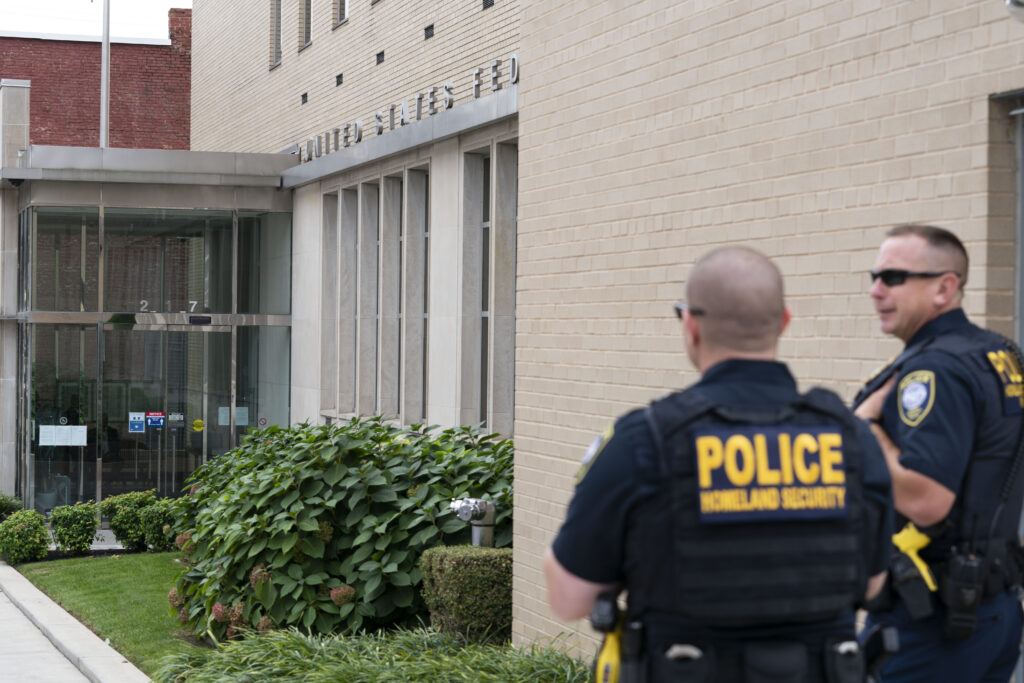 The FBI found a trash bag of shredded documents, thousands of dollars in cash, latex gloves and a “go-bag” when they searched the home of a Maryland couple accused of trying to sell information about nuclear-powered warships to a foreign country, an agent testified Wednesday.

Jonathan Toebbe, a Navy nuclear engineer, and his wife, Diana, were arrested in West Virginia this month. Prosecutors allege that Jonathan Toebbe tried to pass secrets about sophisticated and expensive Virginia-class submarines to someone he thought was a representative of a foreign government but who was actually an undercover FBI agent. The government accuses Diana Toebbe of serving as a lookout for her husband at several “dead drop” locations at which sensitive information was left behind.

The couple pleaded not guilty in federal court in Martinsburg, West Virginia to espionage-related charges that carry life in prison. The Toebbes have been jailed since their arrests.

The country to which Toebbe was looking to sell the information has not been identified in court documents and was not disclosed in court during a detention hearing Wednesday. A judge heard arguments but did not immediately rule on whether Diana Toebbe should continue to be locked up. Jonathan Toebbe waived his right to a detention hearing, meaning he continues to be held.

Peter Olinits, a Pittsburgh-based agent specializing in counterintelligence investigations, testified in support of the government’s argument that Diana Toebbe was a potential flight risk and should remain jailed as the case moved forward.

He described how agents on the day of the couple’s arrest found in their home, among other objects, $11,300 in cash, children’s valid passports and a “go-bag” containing a USB flash drive and latex gloves.

The investigation began in late 2020 after an FBI legal attache office in an unspecified country obtained a package that prosecutors say Jonathan Toebbe had sent that nation. In a letter, he offered to sell confidential U.S. Navy information, according to prosecutors.

The letter, sent on April 1, 2020, and bearing a return address in Pittsburgh, says: “If you do not contact me by December 31, 2020 I will conclude you are uninterested, and will approach other possible buyers,” according to Olinits’ testimony.

After receiving the letter, the FBI began using an undercover agent to communicate with Jonathan Toebbe, arranging for the information to be deposited at “dead drop” locations around the region.

Olinits testified that Diana Toebbe accompanied her husband on three of the four missions. To avoid suspicion, Olinits said, the Toebbes would dress as if tourists or hikers and meander around the drop site.

Authorities say Jonathan Toebbe left at the locations memory cards containing government secrets, concealing them in objects including a chewing gum wrapper, a Band-Aid wrapper and a peanut butter sandwich.

Olinits said the FBI has not been able to locate the roughly $100,000 in cryptocurrency payments that the bureau sent the Toebbes in exchange for the stolen government secrets, and that agents have also not yet recovered all the classified documents.

MacMahon, the lawyer for Diana Toebbe, argued that because the FBI did not record any of the couple’s conversations, agents actually had no proof that his client had any knowledge of her husband’s activities or what precisely he was doing.

He said the couple, who has children, had been planning a family trip, which could explain the bag that agents found and why their passports were being renewed. And he suggested that Diana Toebbe, who has a doctoral degree in anthropology, has no knowledge of nuclear submarines.

“Did it occur to you as part of your investigation that maybe Mr. Toebbe was telling her he was up to something other than espionage against the United States?” MacMahon asked.

“I think that’d be a difficult thing to sell, but maybe,” Olinits said.