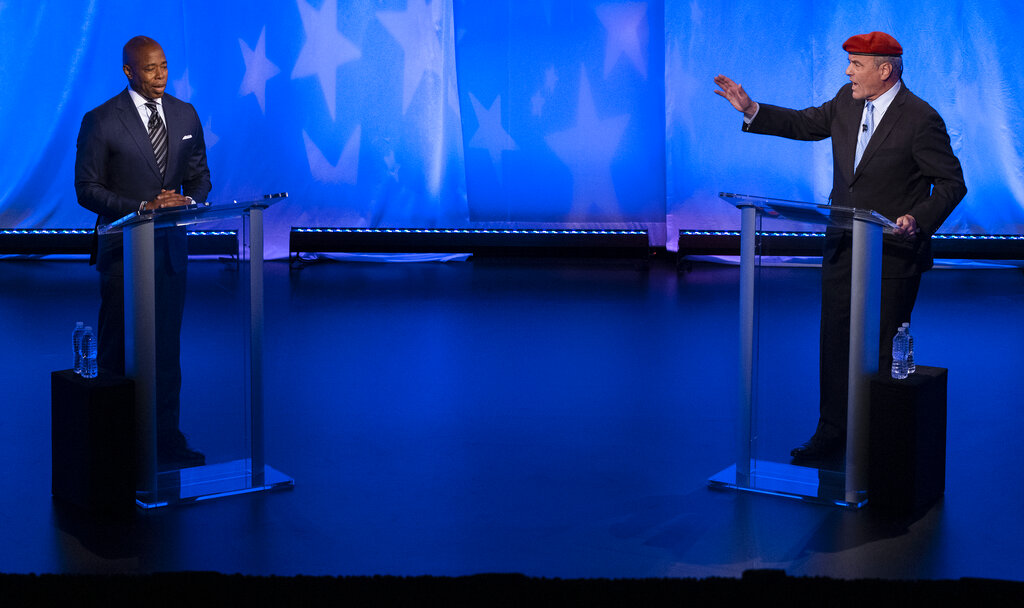 The two men running to become New York City’s next mayor offered starkly different visions Wednesday about how to lead the nation’s largest city out of the pandemic, improve public safety and gird the city of 8.8 million people for more powerful storms driven by climate change.

Democrat Eric Adams and Republican Curtis Sliwa also sparred over personal and character issues, with Adams lambasting Sliwa for having admitted in the past to making up crimes and for “buffoonery.”

Sliwa, the founder of the 1970s-era Guardian Angels anti-crime patrol, insisted he’s the candidate more in-touch with regular New Yorkers. He said he feels they accept his apology for having falsely claimed he was kidnapped decades ago and boasting of faked exploits from his unarmed patrols.

He’s the Democratic candidate in a city where Democrats outnumber Republicans 7-to-1, having campaigned as a moderate choice in a crowded primary field. Adams would be the city’s second Black mayor and as a candidate, he has spoken personally about policing through the lens of having been a cop, a critic of his own department and a young Black man who experienced police brutality.

Sliwa has been a longtime media fixture in New York, first from his days as the founder of the red-beret wearing Guardian Angels and later as a radio commenter with a penchant for attracting news cameras and staging stunts. As a mayoral candidate, he latched on to reports questioning whether Adams really lives at his Brooklyn brownstone and walked around New York with a milk carton featuring a picture of “missing” Adams.

Adams has repeatedly dismissed Sliwa during the campaign and continued to do so during the debate, refusing the opportunity to respond to an extended, rapid-fire critique from his opponent.

Sliwa sought to portray Adams as an out-of-touch elitist for having reportedly vacationed in Monaco and meeting with donors in elite enclaves like the Hamptons.

Adams said he agreed with outgoing Mayor Bill de Blasio’s decision announced Wednesday to mandate COVID-19 vaccines for all city workers, including police officers. Sliwa said he opposed the mandate, saying the city doesn’t have enough police officers as is and can’t afford to lose more to a vaccine mandate.

To revive the city’s empty commercial office space after the pandemic drove workers to stay home, Adams said he’d seek to make the city more business-friendly and mold it into a destination for industries like cybersecurity, biotechnology and drone development.

Sliwa said many people will never come back to in-person work and the city should instead convert empty offices and commercial real estate into affordable housing.

Adams said he’d allow restaurants to keep their pop-up structures on the city’s streets and sidewalks that have served as outdoor dining rooms during the pandemic. Sliwa said the structures are taking up space needed for bicyclists, pedestrians and cars and need to be scaled back.

Sliwa and Adams have both spoken on the campaign trail about combatting violent crime and clashed Wednesday over how to address it. Sliwa called for hiring 3,000 police officers and claimed Adams had shown no interest in using federal resources to put more cops on the streets. He also called for ending the city’s status as a “sanctuary city,” where local law enforcement does not cooperate with stepped-up immigration enforcement from federal officials.

Adams said he would continue the city’s so-called sanctuary status and knocked Sliwa for fabricating crimes and “playing cop” while Adams was in uniform on the police force.

Both candidates were asked how they’d prepare for bigger and more devastating storms fueled by climate change after Hurricane Ida dropped a deadly deluge of rain on the city in September, killing 13 New York City residents.

Adams called for a three-step forecast system warning residents and city agencies of the threat and a plan to more quickly warn those living in flood-prone basement apartments, particularly illegal cellar apartments without ample exits.

Sliwa called for building seawalls to prevent against coastal flooding as seen after Superstorm Sandy nearly a decade ago, along with better cleaning of drains and basins.

Wednesday’s hourlong debate was the first of two face-to-face meetings before the Nov. 2 election. The second debate will be Oct. 26.