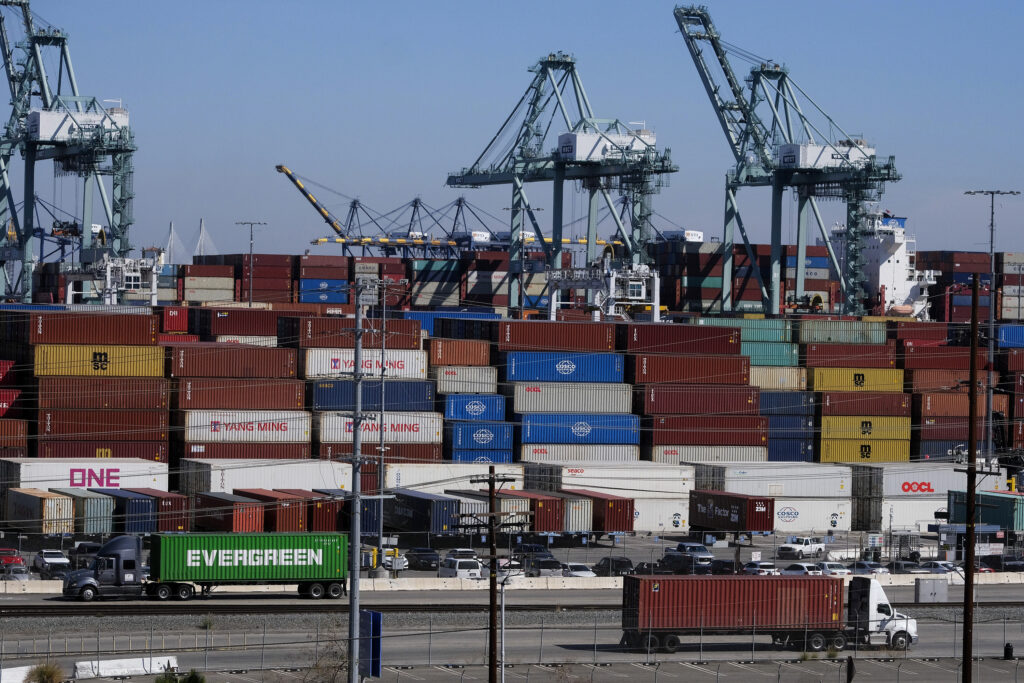 A Los Angeles neighborhood just outside the nation’s busiest port complex has become a perpetual traffic jam, with trucks hauling cargo containers backed up day and night as workers try to break through an unprecedented backlog of ships waiting to unload.

About 40% of all shipping containers entering the U.S. come through the Los Angeles and Long Beach ports. The logjam of ships has interrupted the global supply chain and last week prompted the Biden administration to allow the port complex to operate 24 hours a day to try to get goods unloaded and out to consumers.

Since then, residents of the Wilmington neighborhood just north of the ports have complained that trucks are backed up in the streets at all hours. Meanwhile, cargo companies running out of space to store containers off-loaded from ships are stacking them outside overloaded warehouses and in parking lots.

This week a container slid off a truck making a turn on a narrow street, pancaking a parked car. Nobody was hurt, but local officials say with so many trucks crammed into a small area it was an accident waiting to happen.

“This is becoming an issue of safety,” said Jacob Haik, deputy chief of staff for LA City Councilman Joe Buscaino, who represents the working-class area. Haik said the city would start issuing citations to firms that stack containers unsafely or whose trucks clog streets.

As of Tuesday, there were 63 ships berthed at the two ports and 96 waiting to dock and unload, according to the Marine Exchange of Southern California that oversees port vessel traffic. On Monday, the number of ships waiting to enter the ports hit a record 100.

Maria Arrieran, who owns the UCTI Trucking Company along with her husband, Frank, said she sympathizes with the community, but the truck traffic is a result of limited container storage.

“It’s an ongoing problem. We’re just trying to get these truckers in and out,” she said Wednesday. “I’m literally out on the streets directing traffic.”

California Gov. Gavin Newsom on Wednesday issued an executive order that aims to ease the backlog. He directed California government agencies to look for state-owned properties that could temporarily store goods coming into the ports. Newsom, a Democrat, asked the state’s Department of General Services to review potential sites by Dec. 15.

He also ordered the Governor’s Office of Business and Economic Development to examine other properties not owed by the state, such as private or locally owned parcels, that could also be used for storage, though he didn’t give a timeline for that review.

Newsom’s order is a start, Haik said, but he urged the governor to also allow cities to make it easier to change zoning rules. The city has identified several port-owned plots that could be quickly paved and transformed into storage sites if not for existing red tape, he said.

“The lots are quite small. But if you could pull together 10 or 12 lots, and put 40 containers on each of them, that’s 500 containers,” Haik said. “That’s some serious relief.”

More relief could come by diverting cargo ship traffic to the Port of Oakland. Mayor Libby Schaaf told KRON-TV on Wednesday that her city’s port “has unused capacity right now” and Oakland can “take some of those ships off your hands, L.A.”

Newsom’s order also directed the state’s transportation agency to look for freight routes where vehicle weight limits can be exempt to help with the movement of goods. He asked his administration to come up with port and transportation improvements that could be included in the next state budget, which he will introduce in January.

A coalition of business groups including retailers, truckers, grocers and others said Wednesday that Newsom’s order doesn’t go far enough.

“There are additional real, tangible actions the governor could take to meet the moment and tackle this crisis head-on, but convening taskforces in 2022, delaying urgent actions for at least a month, and pushing funding discussions to the January budget proposal do not provide the sense of urgency needed to address this crisis now,” the coalition said in a letter.