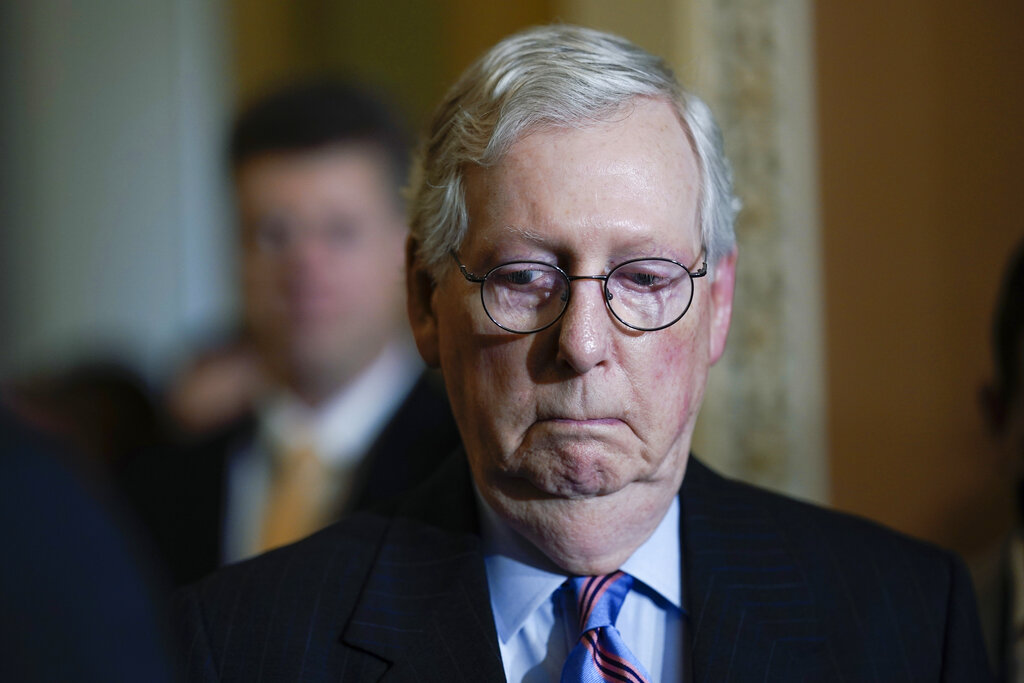 For the third time this year, Senate Democrats on Wednesday tried to pass sweeping elections legislation that they tout as a powerful counterweight to new voting restrictions sweeping conservative-controlled states.

Once again, Republicans blocked them.

But amid the ongoing stalemate, there are signs that Democrats are making headway in their effort to create consensus around changing Senate procedural rules, a key step that could allow them to muscle transformative legislation through the narrowly divided chamber.

Sen. Angus King, a Maine independent who caucuses with Democrats, recently eased his longstanding opposition to changing the filibuster rules, which create a 60-vote threshold for most legislation to pass.

“I’ve concluded that democracy itself is more important than any Senate rule,” said King, who acknowledged that weakening the filibuster would likely prove to be a “double-edged sword” under a Republican majority.

Democrats still face long odds of passing their bill, now known as the Freedom to Vote Act, which Senate Minority Leader Mitch McConnell, R-Ky., excoriated Wednesday as a federal “election takeover scheme.” But the softening of King’s stance on the filibuster amounts to progress, if incremental, for Senate Democrats as they look to convince others in their caucus to support a rule change.

After the vote, Senate Majority Leader Chuck Schumer invoked the Reconstruction era following the Civil War, hailing the Northern senators serving at that time for “going it alone” when confronted by “minority obstruction.”

“Members of this body now face a choice,” said Schumer, D-N.Y. “They can follow in the footsteps of our patriotic predecessors in this chamber. Or they can sit by as the fabric of our democracy unravels before our very eyes.”

The Democrats’ voting bill was first introduced in March in the wake of the Jan. 6 Capitol attack. It quickly passed the House at a time when Republican-controlled legislatures — many inspired by Donald Trump’s claims of a stolen 2020 election — were advancing restrictions in the name of election security that will make it harder to vote and could make the administration of the elections more subject to partisan interference.

But initial optimism that the measure would swiftly pass the Senate dissipated after several members of the Democratic caucus, including King, Kyrsten Sinema of Arizona and Joe Manchin of West Virginia, among others, made clear their reluctance to change the filibuster rules. Manchin, who has said that any election overhaul needs bipartisan support, also sought changes to the voting bill to make it more palatable to Republicans.

As written, the current “compromise” version of the bill would establish national rules for running elections, limit partisanship in the drawing of congressional districts and force the disclosure of many anonymous donors who spend big to influence elections.

It also includes a number of changes sought by Manchin, the chamber’s most conservative Democrat, including a provision that would limit, but not prohibit, state voter ID requirements.

But so far, those changes have not attracted the Republican support that Manchin was seeking.

“The latest umpteenth iteration (of the bill) is only a compromise in the sense that the left and the far-left argued among themselves about exactly how much power to grab and in which areas,” McConnell, who recently met with Manchin about the bill, said Wednesday. “The same rotten core is all still there.”

Hours later, Republicans denied Democrats the 60 votes needed to debate the measure on the Senate floor.

That gives Democrats few options and little time to act on a major party priority while their restive base has become increasingly frustrated by the lack of progress on the issue.

“Democracy — the very soul of America — is at stake,” President Joe Biden said in a statement. “It should be simple and straightforward. Let there be a debate and let there be a vote.”

“Are (Republicans) going to protect this fundamental right? Or are they going to continue to be obstreperous — to use a word the president has used in the past — and put Democrats in a position where there’s no alternative but to find another path forward?” Psaki said Monday.

But Manchin and Sinema, whose votes would be required for any rule change, have said they remain opposed to changing the filibuster.

Meanwhile, pressure is building from the Democratic base for Biden and Senate Democrats to take greater action.

“They have failed to pass substantive legislation, and they are failing to act now,” said Joseph Geevarghese, the executive director of Bernie Sanders-aligned group Our Revolution. “It needs to be made even more clear by the President that he is 100% on the side of the American people’s most sacred right, and if that means fixing the filibuster then we must do it for the sake of our democracy.”