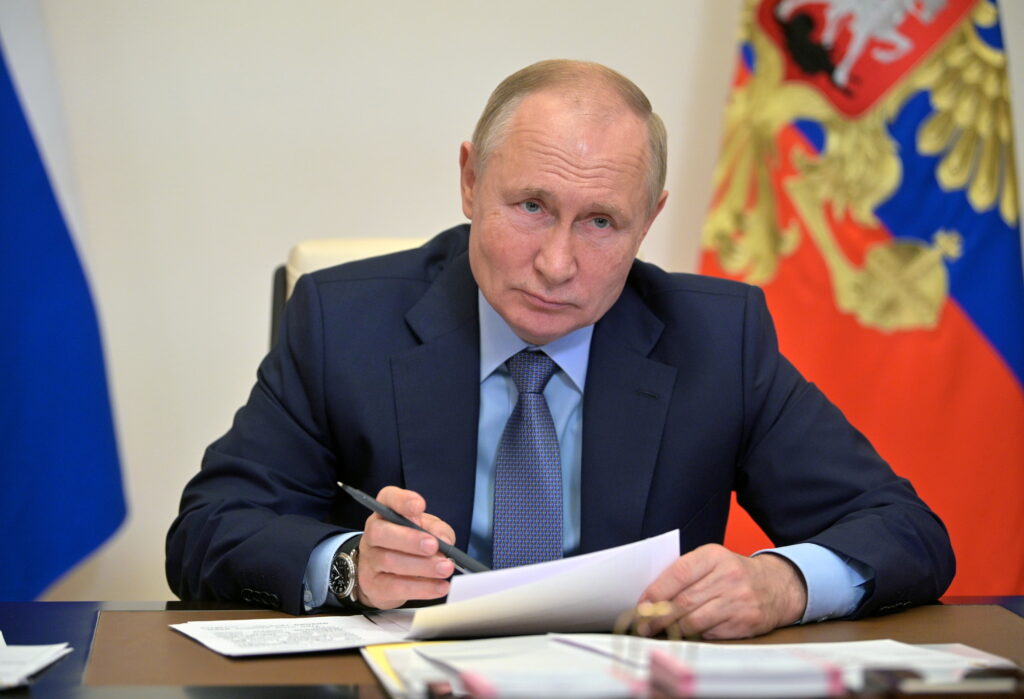 Russian President Vladimir Putin on Wednesday ordered the country’s workers to stay off work for a week starting later this month amid rising coronavirus infection and death numbers, and he strongly urged reluctant citizens to get vaccinated.

The government task force on Wednesday reported 1,028 coronavirus deaths over the past 24 hours, the highest number since the start of the pandemic. That brought Russia’s total death toll to 226,353, which is by far the highest in Europe.

Putin said Wednesday he supports the Cabinet’s proposal to introduce a nonworking period starting Oct. 30 and extending through the following week, when four of seven days already are state holidays. He added that in some regions where the situation is the most threatening, the nonworking period could start as early as Saturday and be extended after Nov. 7.

“Our task today is to protect life and health of our citizens and minimize the consequences of the dangerous infection,” Putin said in a video call with top officials. “To achieve that, it’s necessary to first of all slow the pace of contagion and mobilize additional reserves of the healthcare system, which is currently working under a high strain.”

Russia’s daily coronavirus mortality numbers have been surging for weeks and topped 1,000 for the first time over the weekend amid sluggish vaccination rates, lax public attitudes toward taking precautions and the government’s reluctance to toughen restrictions.

About 45 million Russians, or 32% of the country’s nearly 146 million people, are fully vaccinated.

Putin on Wednesday strongly urged Russians to get the shots, saying, “It’s a matter of your life and health and the health of your dear ones.”

“There are only two ways to get over this period — to get sick or to receive a vaccine,” Putin said. “It’s better to get the vaccine, why wait for the illness and its grave consequences? Please be responsible and take the necessary measures to protect yourself, your health and your close ones.”

The Russian leader, who received the domestic Sputnik V vaccine earlier this year, said he’s puzzled to see hesitancy about vaccines, even among his close friends.

“I can’t understand what’s going on,” Putin said. “We have a reliable and efficient vaccine. The vaccine really reduces the risks of illness, grave complications and death.”

Even though Russia in August 2020 became the first country of the world to authorize a coronavirus vaccine and vaccines are plentiful, Russians have shown hesitancy about getting the shots, a skepticism blamed on conflicting signals sent by authorities.

While extolling Sputnik V and three other domestic vaccines, state-controlled media were often critical of Western-made shots, a controversial message that many saw as feeding public doubts about vaccines in general.

Until now, the Kremlin has ruled out a new nationwide lockdown like the one early on in the pandemic that dealt a heavy blow to the economy and sapped Putin’s popularity, empowering regional authorities across the country’s 11 time zones to decide on local restrictions, depending on their situation.

Deputy Prime Minister Tatyana Golikova, who leads the government coronavirus task force, said Wednesday that the nonworking week will imply restrictions on access to restaurants, cafes, theaters, cinemas, gyms and other facilities, adding that authorities in each region will be expected to take relevant decisions.

The Cabinet has drafted compensatory measures to help absorb the shock for the business, including one-time payments equivalent to a minimum monthly pay per worker and low-interest credits.

Many of Russia’s 85 regions already have restricted attendance at large public events and limited access to theaters, restaurants and other venues. Some have made vaccinations compulsory for certain public servants and people over 60.

In some regions, mounting infections forced authorities to suspend medical assistance to the population as healthcare facilities were forced to focus on treating coronavirus patients.

Kremlin spokesman Dmitry Peskov admitted that the situation is “very sad,” noting that the level of vaccination in those regions was particularly low.

In Moscow, however, life has continued as usual, with restaurants and theaters brimming with people, and commuters widely ignoring mask mandates on public transportation even as ICUs have filled in recent weeks.

On Tuesday, Moscow Mayor Sergei Sobyanin said unvaccinated people over 60 will be required to stay home. He also told businesses to keep at least a third of their employees working remotely for three months starting Oct. 25.

The government task force has registered a total of more than eight million infections and its official COVID-19 toll ranks Russia as having the fifth-most pandemic deaths in the world, behind the United States, Brazil, India and Mexico.

However, state statistics agency Rosstat, which also counts deaths in which the virus wasn’t considered the main cause, has reported a much higher pandemic death toll — about 418,000 people with COVID-19 as of August. Based on that number, Russia would be the fourth hardest-hit nation, ahead of Mexico.