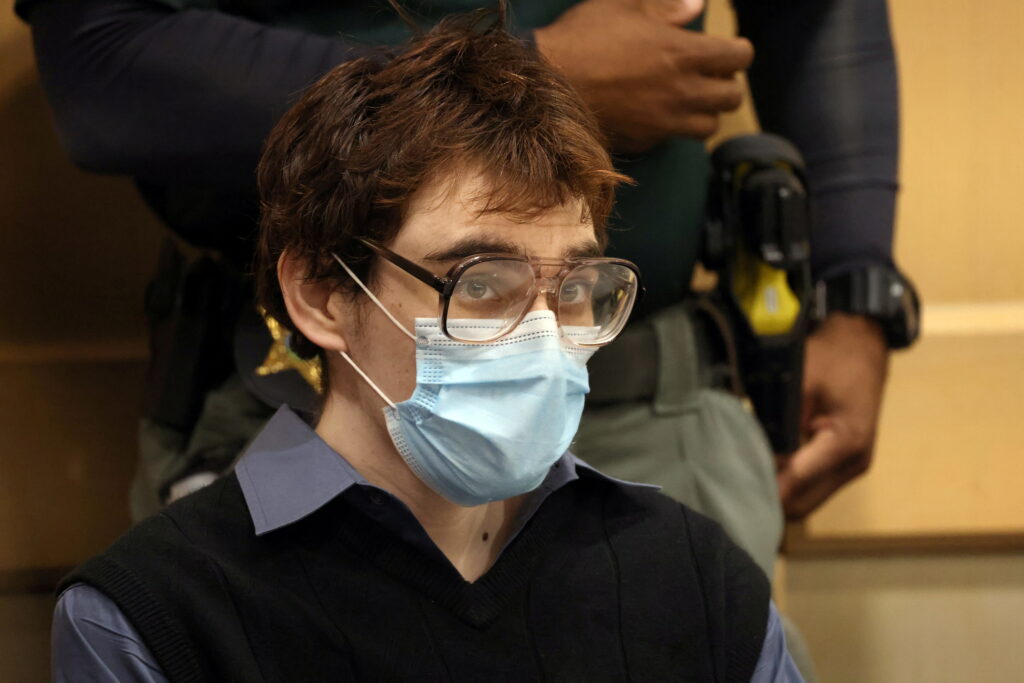 The families of the victims, as a rule, do not speak the gunman’s name. And when he finally addressed them in person Wednesday, the gunman did not even face them.

Nikolas Cruz, the man who terrorized Marjory Stoneman Douglas High School just minutes before school let out on Feb. 14, 2018, slouched before Broward Circuit Judge Elizabeth Scherer, flanked by his defense lawyers, and declared himself guilty, one by one, of 17 counts of murder and guilty of 17 counts of attempted murder.

Then he asked the judge if he could make a statement to the families.

“I am doing this for you, and I don’t care if you do not believe me, and I love you, and I know you don’t believe me, but I have to live with this every day,” he mumbled. Some family members glared in his direction. The parents of slain victims Luke Hoyer and Gina Montalto, who died near each other in the first floor hallway, held hands. Others looked down, weary after hearing prosecutor Mike Satz recount the shooting bullet by bullet, victim by victim.

“I am very sorry for what I did,” he said, complaining of nightmares and an inability to live with himself. Most oddly, as if reading from a speech prepared for a different occasion, he railed against marijuana use. He concluded with a plea for the mercy he did not show when he last walked through the halls of Stoneman Douglas: “I hope you give me a chance to try to help others.”

He said he felt his fate should be up to the families of the people he killed. But whether Cruz lives or dies will ultimately be decided by a jury, Scherer said. Selection in that case is set to begin Jan. 4, she said.

Outside the courtroom, parents who had to bury their children showed no patience for the now-convicted killer’s pleasantries, calling it an “ugly surprise,” “irrelevant” and “absolutely ridiculous.”

“I don’t want to hear that he’s sorry or that he wants to do good,” said Broward School Board member Debbie Hixon, whose husband, Chris, the school’s athletic director, died in the shooting. “He should have thought of that on February 13th. It’s too little too late.”

Tony Montalto, whose daughter, Gina, 14, was one of the murdered victims, also condemned the statement. “He’s doing it for our families? If you wanted to do something for our families, you shouldn’t have killed our loved ones!” he said.

The guilty pleas came after the judge carefully went over the gunman’s rights under the law.

“The maximum penalty is death,” she warned him, which means “you will not come out until you are no longer alive. … You are facing a minimum best-case scenario of life in prison. Do you understand?”

“Yes,” he said. For each of those attempted murder counts, he faces a sentence of 20 or 25 years to life in prison.

Victim by victim, the judge read the names of the dead and the wounded. “Guilty,” Cruz replied after each one.

“I accept your plea,” the judge said. “I find that you are alert and intelligent.”

In terms of criminal justice, there’s only one question left without an easy answer: Will the state of Florida execute Cruz as punishment for the lives he ended, or will a jury show him the mercy he denied to those who crossed his path that day?

Scherer set an Oct. 26 court date to schedule the next step of the death penalty case.

In a separate case, in which Cruz pleaded guilty last week to four counts associated with his assault on a deputy guarding him at the Broward main jail in November 2018, Scherer sentenced him to 26 years in prison.

After the courtroom was cleared Wednesday, Guttenberg, among the most vocal and politically active parents since the shooting, had little to say.

“We’re one step closer to justice,” he said, walking away. “I’m going to go see my daughter.”