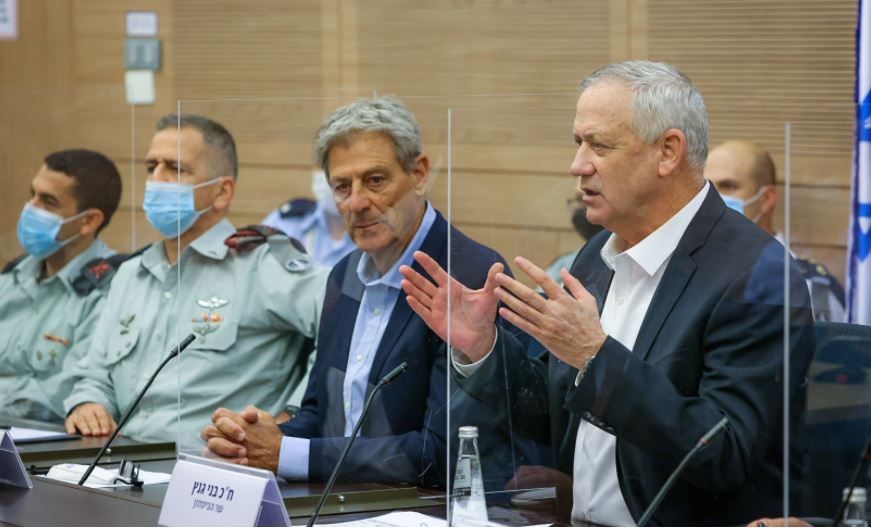 ​The Joint Committee of the Finance Committee and the Foreign Affairs and Defense Committee on the Defense Budget, chaired by MK Ram Ben Barak (Yesh Atid), convened on Tuesday for further discussions on the defense budget. The meeting was attended by Defense Minister MK Benny Gantz (Blue and White), IDF Chief of Staff Lt.-Gen. Aviv Kochavi, Ministry of Defense Director General Maj.-Gen. (ret.) Amir Eshel, Ministry of Finance Budget Commissioner Yogev Gardos, and Brig.-Gen. Dr. Pinchas Gil, economic adviser to the Chief of Staff and head of the Budget Department at the Ministry of Defense.

The meeting was held behind closed doors, but the committee chair and the defense minister made a statement to the media at the start of the meeting.

MK Ben Barak: “’There are dangers to the security of Israel and its residents, and they must not be disregarded. Only a strong State of Israel can provide its leaders with the sense of security that is necessary to make tough, sometimes painful decisions… Behind a ‘strong State of Israel’ stand the commanders and soldiers of the IDF and the personnel of the defense establishment. The State of Israel’s fate depends upon them. This is a responsibility of the greatest weight. These words were spoken by the former Prime Minister and Defense Minister Yitzchak Rabin; just yesterday we marked the 26th anniversary of his murder by a foul assassin. The IDF was very dear to Yitzchak Rabin. And all of us here, members of the defense establishment, MKs and ministers, are committed to his legacy of keeping the IDF above any debate or political issue. Chief of Staff Kochavi, you — together with the IDF commanders — hold the baton of war that has been passing from one generation to the next, as if in a relay race, since the establishment of the State.

“The State of Israel faces complex regional challenges, from near and far. The State of Israel is coping with a broad range of threats — from terrorist incidents at the [border] fence and knife attacks in the streets to an uncompromising battle to prevent the entrenchment of Iran in the region, and blocking Iran’s race to obtain a nuclear weapon. [We face] an array of threats, from knives to nuclear weapons. However, we are in one of the calmest periods that the State of Israel has known. This is thanks to daily activity to thwart terrorist attacks and subversive efforts, carried out by the IDF, the Shin Bet, the Mossad, the Israel Police and overseas partners.

“This calm comes at a cost. The Tnufa multi-year plan being led by Chief of Staff Kochavi has not been budgeted fully, since for the past three years the State of Israel has managed its affairs irresponsibly without an orderly budget. We will make sure that the work plan and the budget provide a response to all the challenges, from the third circle [of threats] to the wages of the soldiers in regular service. The current government has made it a top priority to approve a budget for the State of Israel, and we are here to carry out the task.

“It is unthinkable that in addition to the uncertainty of the regional reality, we will continue to manage our affairs in budgetary uncertainty. The defense budget must reflect the guidelines of the political echelon for the multi-year plan, and they must be incorporated in it. The committee’s role is to supervise and oversee the plans of the IDF and the defense establishment, and ensure that the political echelon’s guidelines become implementable multi-year work plans.

“The defense minister and the chief of staff are familiar with my approach, that supervision will always be done with respect for those who are doing the work, and based on dialogue and mutual appreciation by the two sides to these discussions. That is how the committee meetings are run, and particularly the in-depth discussions in the subcommittees.”

Defense Minister Gantz said: “I would like to thank you for your thorough and ongoing work, supervision of the conduct of the defense establishment in general and the budget issue in particular, and for being full partners to building our plans, based on a broad view of Israel’s security needs.

“Israel faces security challenges in many areas, so there is great importance to approving the defense budget, after years without a properly defined budget, which to some degree harmed the ability to take action, and greatly [harmed] the ability to effectively enter into agreements and engage in force buildup in the most effective manner.

“The overall goal that stands behind the budget is to strengthen Israel’s strategic standing and maintain its security supremacy in the region, based on preservation of force, operating the IDF and the defense establishment and buildup of force components for the long term.

“In the implementation of the budget we are presenting, there is a clear order of operational priorities:

“The top priority is dealing with the main potential existential threat to the State of Israel — the Iranian nuclear program. We see that Iran is advancing towards an enrichment level that will enable it, should it so decide, to become a nuclear threshold state — and we are making every effort to prevent this. We will invest in offensive and defensive capabilities, enhance technological supremacy, and accelerate the efforts to ensure that — although Iran is primarily a global and regional challenge — Israel will always have the ability to defend its citizens on its own. This is true for all areas, and also for the Iranian area.

“We are also preparing for the next campaign — including warfare in two areas simultaneously, while employing multidimensional capabilities, maneuverability and growing deadliness.

“We are increasing and improving training, accumulating targets, and developing capabilities versus Hezbollah and Hamas, which will increase the State of Israel’s deterrence and ability to achieve victory, if necessary. Along this, in terms of defense policy, we are working to strengthen the Palestinian Authority and improve the relationship [with it], and strengthen all stabilizing elements in the region.

“Along with approving the budget, we are already preparing to draw up a multi-year budget in keeping with the Tnufa multi-year plan and the acquisition of equipment that has been delayed for years. If we provide certainty in terms of resources, we will be able to cut costs and carry out long-term purchasing that will build up our capabilities and support domestic industries.

“We are also improving the home front’s readiness for emergencies. Just this morning we experienced a minor earthquake, and I can inform you that in the coming months, through intensive work by the National Emergency Management Authority (NEMA), the Geological Survey of Israel and the Home Front Command, we will connect the national alert system to earthquake warnings as well, so that it will also be possible to warn citizens through the existing alert systems in the Home Front Command, by means of sirens and cell phones.

“This is an opportunity to say thank you to the chief of staff and the IDF commanders for the good and important work they have been doing over the years, and to the [Defense] Ministry personnel for the purchase processes and the security envelope. We strive to provide a proper response to all the security challenges faced by the State of Israel. But the condition for meeting the objectives I presented is the people. We need the best combatants who are willing to charge, the best technicians who know how to solve problems, the administrative personnel who will know how to back up all the operational systems, and civilians on the home front who will be resilient and provide us with backing.

“For this reason, we are investing efforts in advancing the move of IDF Military Intelligence to the Negev, in anchoring the Memadim Lalimudim program [funding studies for demobilized soldiers], in fortification of northern Israel, which will start after years of delay, in assisting to the national effort to overcome the coronavirus, and in the One Soul reform on behalf of disabled IDF veterans. That is why the finance minister and I, together with the chief of staff, are also currently working on a plan to raise the soldiers’ living stipends.”