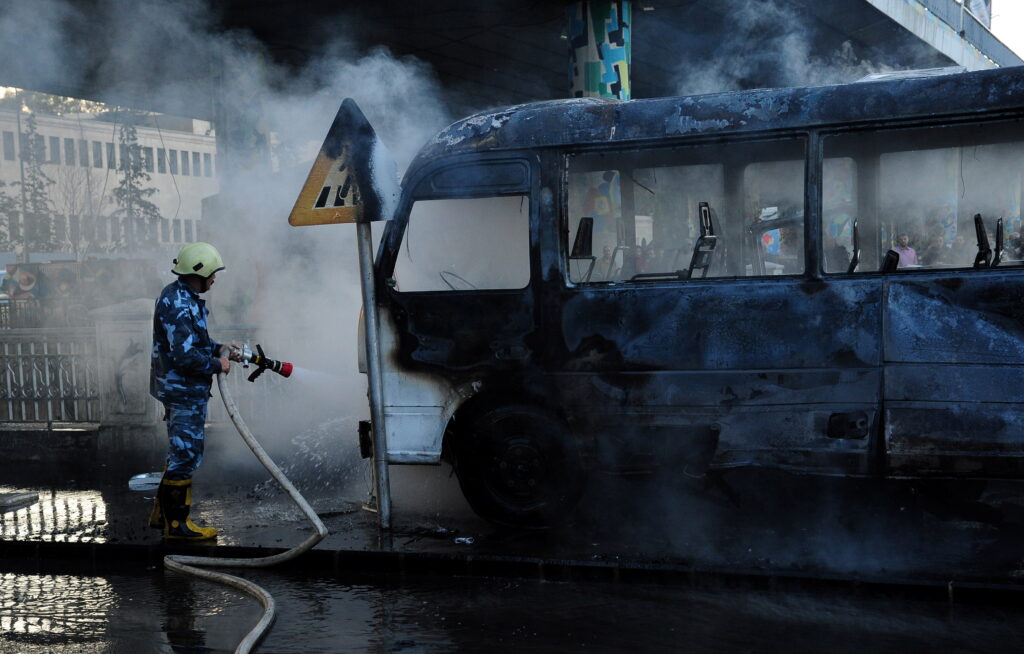 A blast on an army bus in Damascus on Wednesday killed 14 people, state media reported, the deadliest bombing in the Syrian capital in years, quickly followed by army shelling in rebel-held Idlib which rescue
workers said killed 12 people.

The bus carrying troops was blown up near a bridge in the centre of Damascus. A military source quoted by state media said two bombs had been attached to the vehicle in advance. Army engineers defused a third.

About an hour after the bus blast, shells rained down on Ariha in Idlib in the northwest of the country, one of the last areas still held by rebels fighting against President Bashar al-Assad.

The Syrian Observatory for Human Rights, a monitoring group, called it the deadliest attack on Idlib since March 2020. Rescue workers said at least 30 people were wounded.

In an apparent third incident, Iran’s state-run Al-Alam TV reported a blast during maintenance at a Syrian army ammunition depot that killed five people and injured four on the road between the cities of Homs and Hama. It did not identify those killed. Iranian forces have backed the Syrian government.

A decade of conflict in Syria has killed hundreds of thousands of people, although major fighting has mostly died down in recent years with the government of Assad now in control of nearly all major cities and towns.

There was no immediate claim of responsibility for the Damascus bombing, and the Syrian army and state media were silent about the subsequent shelling of Idlib.

Attacks in Damascus have been rare since the army crushed rebel enclaves around the city with backing from Russia and Iran-backed forces in 2018.

Dozens of people were killed in Damascus in 2017 in several suicide attacks claimed by jihadists, including two against police stations which Islamic State said it carried out.

Islamic State militants still operate in the deserts of central and eastern Syria, where they have mounted several attacks this year on army vehicles.

U.N.-backed efforts to reach a political settlement to the war, which have so far made little progress, took a step forward on Sunday when the U.N. envoy said the government and opposition had agreed to draft a new constitution.