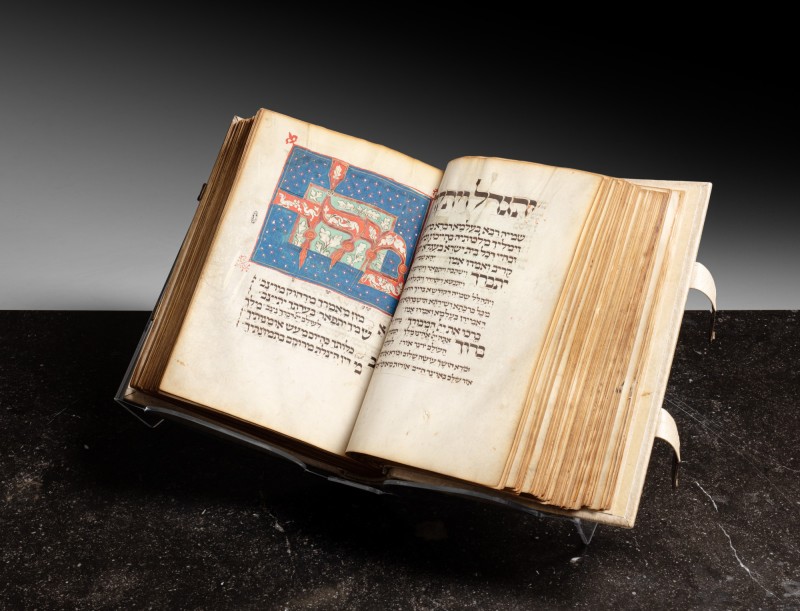 A medieval machzor sold for $8,307,000 at the Sotheby’s auction house Tuesday, fetching the highest price ever paid for a Hebrew manuscript.

Created seven centuries ago, the magnificent Luzzatto machzor for the Yamim Nora’im is a scribal masterpiece that attests to the vibrancy of the medieval Jewish community. Written in a distinctive and elegant Hebrew script, this rare machzor contains the liturgy for Rosh Hashanah and Yom Kippur. Preserved in exceptionally fine condition, it is one of only a small number of illustrated Ashkenazic machzorim extant, none of which are known to be in private hands.

This manuscript was copied and decorated in southern Germany in the late 13th or early 14th century by a scribe named Abraham. His calligraphic dexterity and artistic creativity are evident in the book’s layout, script and imaginative illustrations of Gothic architecture, fantastical beasts and medieval Jews engaged in prayer. Originally produced for a Jewish community in the region of Bavaria, over the ensuing centuries the Luzzatto machzor found new homes in Alsace, the Lake Constance region, northern Italy and France. Numerous notes and annotations handwritten in the manuscript’s margins attest to this important book’s travels through different countries. At each step of the journey, the new owners of the manuscript adjusted the text to reflect contemporary local custom and practices, adding to the complexity and richness of the machzor.

The machzor is named for its illustrious former owner, Samuel David Luzzatto, a distinguished Italian Jewish scholar, poet and theologian, as well as a renowned antiquarian book collector. After Luzzatto’s death, many of his manuscripts and rare printed books were acquired for the collections of major European cultural institutions. In 1870, this important machzor was purchased for the library of the Alliance Israélite Universelle.

The winning bid reportedly went to an anonymous American buyer.