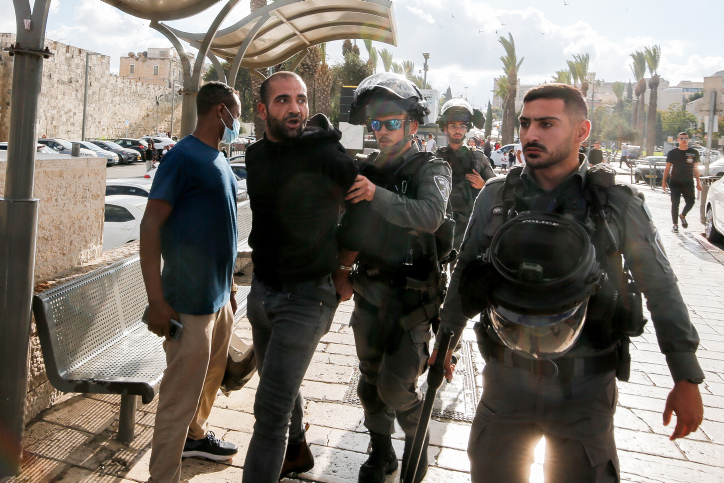 Palestinian rioters and police clashed for several hours near Damascus Gate in Yerushalayim’s Old City on Tuesday afternoon and evening, according to media reports.

The Magen David Adom ambulance service said it took two people aboard the bus who were wounded — including the bus driver — to the hospital. They suffered light injuries, according to Maariv.

Police responded with stun grenades, tear gas and sprayed foul-smelling skunk water at the site to disperse the Palestinian protesters.

Seventeen people were reportedly injured, 10 of whom were hospitalized, according to the Palestinian Red Crescent; and 22 arrested in the incident, which was considered unusual for daytime hours, as violence around the Old City usually occurs at night.

This was the worst outbreak of violence in recent weeks, during which tensions have risen at the scene, which has long been a flashpoint. Police say they have arrested dozens of alleged rioters over the past few weeks during repeated rounds of clashes.

By late Tuesday evening, the fighting seemed over, and vehicular and pedestrian traffic flowed freely, though a police presence was maintained near the Old City entrance in the event of another flareup.

Earlier, Palestinians circulated videos on social media appeared to show Israeli police brutality as they broke up the Palestinian gatherings near Damascus Gate. In the footage, Israeli police could be seen arresting several Palestinians, including children. An undercover officer also apparently fired in the air during an arrest.

Tuesday’s disorders followed a series of incidents in recent days precipitated by a dispute over the right to use local land for Muslim cemeteries. An Israeli court had ordered the practice stopped.

In the wake of previous attacks on buses and other vehicles, on Monday, buses changed their routes to avoid passing by Damascus Gate and stopped by Jaffa Gate, without reaching their destination at the Kosel, The Jerusalem Post noted.

“We will not endanger the driver and passengers’ safety within Yerushalayim and we expect police and defense forces to act professionally and carefully to find a solution,” Egged’s spokesperson reportedly said.