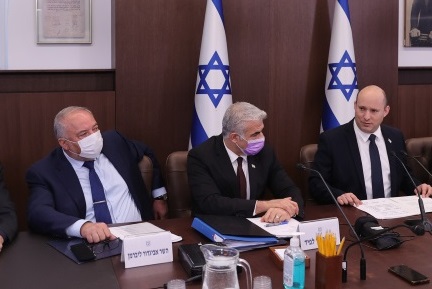 Prime Minister Naftali Bennett asked his coalition partners at the weekly cabinet meeting on Sunday to avoid bickering that could jeopardize passage of the state budget, which the government needs to do by mid-November in order to avoid another round of elections.

“There is no point in starting to rock the boat,” Bennett told ministers, according to a statement from the Prime Minister’s Office. “Even when someone has a really burning urge to respond, certain that they are right – let us keep the bigger goal in mind.”

It was not clear why Bennett chose to make his appeal to the ministers in a public forum rather than privately.

The remarks were variously described as “imploring,” by The Times of Israel, and “begging” by The Jerusalem Post.

Although the government has until November 14 to finalize the budget, the Knesset vote will probably have to be held by November 10, as the plenum is usually only in session from Monday to Wednesday.

Bennett has in recent weeks repeatedly called on his multi-bloc coalition partners, who have little in common ideologically, to keep the peace until the budget is passed.

A simmering point of contention that could threaten the delicate balance is that of promises made in the billions of shekels to Ra’am, an Islamist party with four Knesset seats.

Last week, Ra’am leader MK Mansour Abbas met with Bennett to complain about Interior Minister Ayelet Shaked and Education Minister Yifat Shasha-Biton — of the right-wing Yamina and New Hope parties, respectively — both of whom he said are holding up some of the promised funding, Channel 12 news reported on Friday.

Ra’am, whose MKs have already broken coalition ranks in previous Knesset votes, has threatened to take similar action if the terms of its coalition agreement are not met.