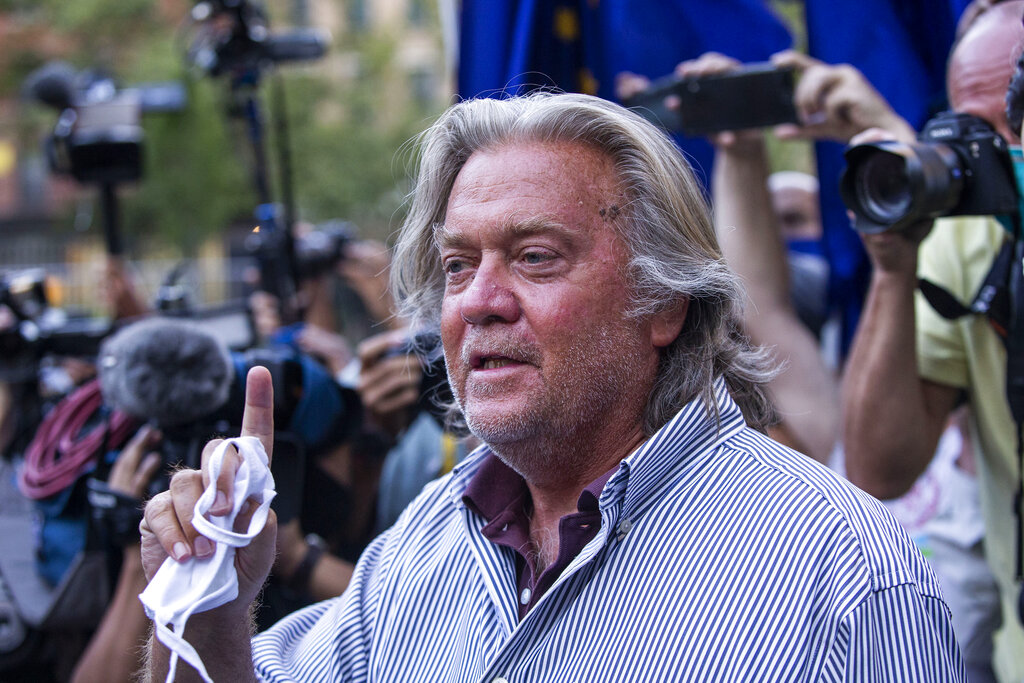 The chairman of the special committee, Rep. Bennie Thompson, D-Miss., said the panel will vote Tuesday to recommend charges against Bannon, an adviser to Donald Trump for years who was in touch with the president ahead of the most serious assault on Congress in two centuries.

“The Select Committee will not tolerate defiance of our subpoenas,” Thompson said in a statement Thursday. Bannon, he said, is “hiding behind the former president’s insufficient, blanket and vague statements regarding privileges he has purported to invoke. We reject his position entirely.”

If approved by the Democratic-majority committee, the recommendation of criminal charges would go to the full House. Approval there would send them to the Justice Department, which has final say on prosecution.

The showdown with Bannon is just one facet of a broad and escalating congressional inquiry, with 19 subpoenas issued so far and thousands of pages of documents flowing to the committee and its staff. Challenging Bannon’s defiance is a crucial step for the panel, whose members are vowing to restore the force of congressional subpoenas after they were routinely flouted during Trump’s time in office.

The committee had scheduled a Thursday deposition with Bannon, but his lawyer said that Trump had directed him not to comply, citing information that was potentially protected by executive privileges afforded to a president. Bannon, who was not a White House staffer on Jan. 6, also failed to provide documents to the panel by a deadline last week.

Still, the committee could end up stymied again after years of Trump administration officials refusing to cooperate with Congress. The longtime Trump adviser similarly defied a subpoena during a GOP-led investigation into Trump’s Russia ties in 2018, but the House did not move to hold him into contempt.

Even though President Joe Biden has been supportive of the committee’s work, it is uncertain whether the Justice Department would choose to prosecute the criminal contempt charges against Bannon or any other witnesses who might defy the panel. Even if it the department does prosecute, the process could take months, if not years. And such contempt cases are notoriously difficult to win.

Members of the committee are pressuring the department to take their side.

House Intelligence Committee Chairman Adam Schiff, who also sits on the Jan. 6 panel, said he expects the Justice Department to prosecute the cases.

“The last four years have given people like Steve Bannon the impression they’re above the law,” Schiff said during an interview. “But they’re going to find out otherwise.”

Schiff said efforts to hold Bannon and others in contempt during the Russia investigation were blocked by Republicans and the Trump administration’s Department of Justice.

“But now we have Merrick Garland, we have an independent Justice Department, we have an attorney general who believes in the rule of law — and so this is why I have confidence that we will get the answers,” Schiff said.

While Bannon has outright defied the Jan. 6 committee, other Trump aides who have been subpoenaed appear to be negotiating. A deposition by a second witness that had been scheduled for Thursday, former Defense Department official Kashyap Patel, was delayed, but Patel is still engaging with the panel, a committee aide said. The aide requested anonymity to discuss the confidential talks.

Two other men who worked for Trump — former White House chief of staff Mark Meadows and longtime Trump social media director Dan Scavino — were scheduled for depositions Friday, but they have both been pushed back as well. Meadows, like Patel, has been given a “short postponement” as he is also engaging with the panel, the aide said, and Scavino’s deposition has been rescheduled because there were delays in serving his subpoena.

It is unclear to what extent Trump has tried to influence his aides, beyond his lawyers’ attempts to assert executive privilege. In a statement Thursday, the former president said the members of the committee should “hold themselves in criminal contempt” and that “the people are not going to stand for it!”

Other witnesses are cooperating, including some who organized or staffed the Trump rally on the Ellipse behind the White House that preceded the riot. The committee subpoenaed 11 rally organizers and gave them a Wednesday deadline to turn over documents and records. They have also been asked to appear at scheduled depositions.

Among those complying was Lyndon Brentnall, whose firm was hired to provide Ellipse event security that day, and two longtime Trump campaign and White House staffers, Megan Powers and Hannah Salem. It is uncertain whether any of the others subpoenaed have complied.

The panel has also issued a subpoena to a former Justice Department lawyer who positioned himself as Trump’s ally and aided the Republican president’s efforts to challenge the results of the 2020 election.

The demands for documents and testimony from that lawyer, Jeffrey Clark, announced Wednesday, reflect the committee’s efforts to probe not only the insurrection but also the tumult that roiled the Justice Department in the weeks leading up to it as Trump and his allies leaned on government lawyers to advance his election claims.

Clark, an assistant attorney general in the Trump administration, has emerged as a pivotal character. A Senate committee report issued last week showed that he championed Trump’s efforts to undo the election results and clashed as a result with department superiors who resisted the pressure, culminating in a dramatic White House meeting at which Trump ruminated about elevating Clark to attorney general.