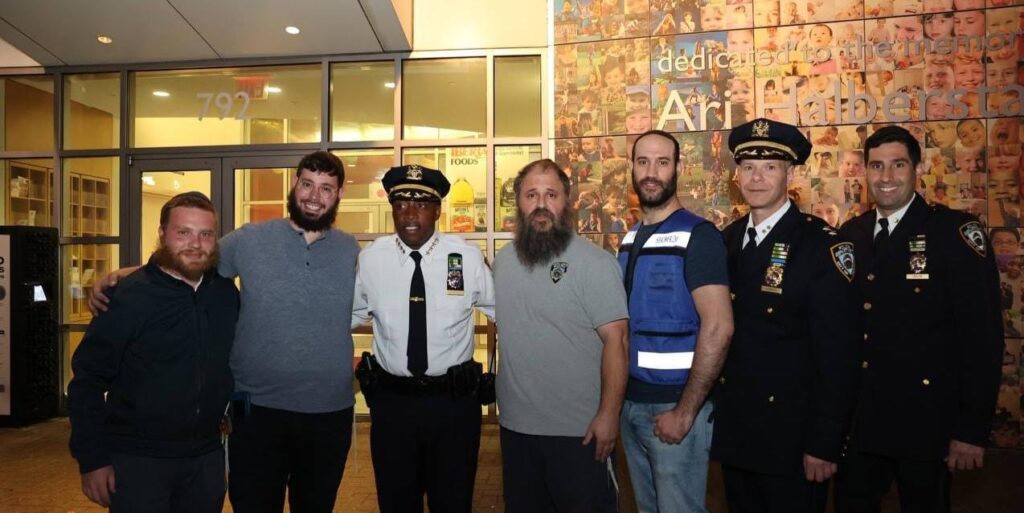 NYPD Chief of Department Rodney Harrison and Chief of Brooklyn South Michael Kemper visited Crown Heights Tuesday evening, a day after a yeshiva student was shot in the head with a BB gun. The police officials took a walking tour of the neighborhood as they assured the residents that they are working to keep the area safe.

The victim was hospitalized Monday night in stable condition, treated and released.

The chiefs and other police officials walked with community leaders and residents started from the Jewish Children’s Museum on Eastern Parkway, went into Chabad Headquarters at 770 Eastern Parkway, then walked to the location of the shooting at Albany Avenue and Montgomery Street, and back to the museum.

Devorah Halberstam, a resident of Crown Heights whose son Ari, Hy”d, was shot and killed on the Brooklyn Bridge in 1994, expressed the sentiment of the neighborhood that although residents are apprehensive, they appreciate that the police have shown the community that they are looking out for them. “We hope the perpetrators are apprehended sooner rather than later,” she said.

Harrison acknowledged that the community is “uneasy at this time,” but that “one of the reasons why I came out here was to show them that we’re going to put all of our resources here to make sure that there are going to be no issues with safety concerns.”

“We will not tolerate any hate crime in New York City,” said Harrison. “We’re going to investigate this case thoroughly. We have our best detectives from our Hate Crime Task Force looking at this case, and we’re going to get down to the bottom of it, identify the individuals that committed this crime, and hold them accountable.”

Kemper, noting the large police presence in the area, said, “We just want to make sure the community feels safe and provide a safe environment for them,” and said that the participation of Harrison, the Department’s highest-ranking uniformed officer, “lets the community know just how serious the NYPD takes the safety of this community.”

Police believe at least two people were in the car from which the BB gun was shot: a driver, and the shooter who fired from a backseat window.

When Rabbi Eli Cohen, executive director of Crown Heights JCC, mentioned to Harrison that police reforms have made crime-fighting more difficult, the chief agreed saying, “Some of the legislation that’s been put in place has made our job harder.”

Asked by a Hamodia reporter to elaborate, the chief responded, “There are a lot of things that the NYPD [has to] to deal with that has made our job, much harder. We could talk about the discovery laws, where it’s made people that are willing to cooperate with us put in a position to now be in harm’s way. That’s something that you have to think about – people who want to cooperate and be witnesses, now, their information is being given over to the defense. That information could go anywhere. People are reluctant to come forward now. That’s one of the legislation that has made our job a whole lot more difficult …. There’s a host of other things, but that’s the one that really resonates with me as Chief of Department, like how do we get people to feel comfortable to come forward, knowing there’s a potential of danger, or retaliation if they do take that step to help us out.”

When the reporter asked for his thoughts in bail reform, Harrison replied, “Unfortunately with bail reform, a lot of people are being arrested and being able to come [right back out] and committing crimes again. We’re seeing it over and over again. There’s no accountabilty. As an advocate for victims – that’s what I’ve always considered myself as, being in this line of work – how do I tell somebody who is a victim, that we’re going to hold that person accountable, but meanwhile because of bail reform they’re sure to come out the next day. I think that’s something that we have to take a look at. I’m very proud to protect New Yorkers. I’m very proud, if somebody happens to be a victim in this great city, that the NYPD will work very hard to get those suspects and bring them into custody. But there also has to be the accountability when we do that.”

After the procession returned to the Jewish Children’s Museum, NYPD Deputy Inspector Richie Taylor, the Department’s highest-ranking yarmulke-wearing officer, said, “For the Police Department, it’s important that people are kept safe — and equally important for people to feel safe, too.”