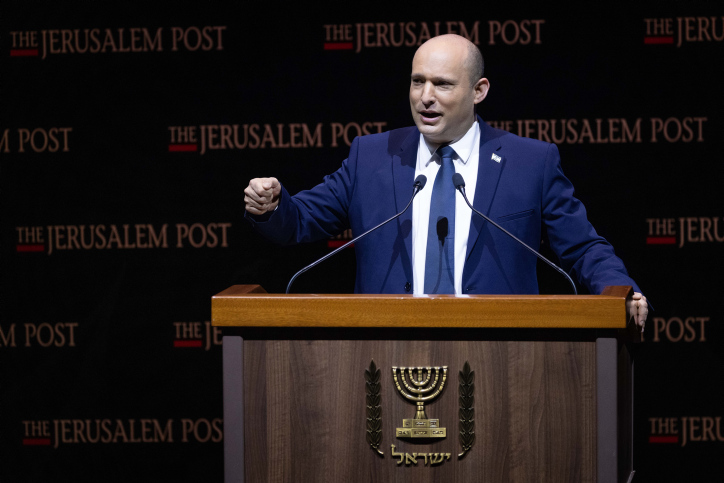 Speaking at The Jerusalem Post’s 10th Annual Conference on Tuesday morning, Prime Minister Naftali Bennett made a provocative speech revealing his stance against the chareidi sector. Bennet called for action to restrain chareidi political influence, while referring to the left-wing as an important part of country’s political dialogue.

“We need all three vectors,” said Bennett, about the three political factors, the Right, the Left, and the chareidim.

“We are a Jewish State, and I’m happy that there are chareidim, but we need to limit their political influence. And I wouldn’t want an Israel without a left-wing,” Bennett continued.

“I clearly feel differently from them on a lot of issues, but I want that counter-debate.”

Chairman of UTJ MK Rabbi Moshe Gafni: Bennett’s words are not surprising, he did it in the partnership with Lapid [in 2013] and only pleaded with the chareidi public to accept him because he needed it for his own gain. This is the same man who lies on any and every topic. It is not surprising, being that Bennett also knows that he will not need us anymore, because this is his last term in the political system.”

MK Rabbi Yaakov Litzman (UTJ) responded: “When Bennett talks about the need to limit the chareidi political influence, he forgets how much he used it for his political needs and for the public he represented in the past. At the time, in the not-too-distant past when he needed chareidim he knew how to beg for their help.

“They say ‘lest they increase,’ and we say, ‘and so they will multiply.'”

MK Rabbi Yisrael Eichler (UTJ) commented: “The chareidim have been here in Israel for two hundred years, dating back to the days of the Turks. The aliyah of the Chassidim, the aliyah of the students of the Vilna Gaon and the Yemenite aliyah were all chareidi. Bennett’s parents immigrated here from San Francisco.

“Bennett has two options: to apologize or to resign.”

Shas chairman Rabbi Aryeh Deri said: “An illegitimate prime minister with six seats, who in all polls barely passes the electoral threshold and represents only himself, wants to limit the influence of the chareidi public which represents a million people. Bennett, every scam has an end. A government will be formed to represent the will of the people, including the chareidi public, which received 16 seats in the last election.”