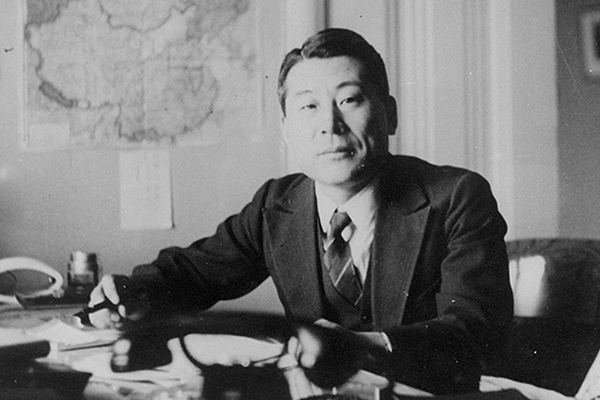 After initially denying Nobuki Sugihara and his family an entry visa over missing COVID-19 documents, Israel reversed course on Friday morning, and granted them entry to attendthe ceremony.

The ceremony, organized by the municipality, took place on at 4:00 pm, and was attended by Jerusalem Mayor Moshe Lion and Japan’s ambassador to Israel Koichi Aiboshi.

Chiune Sugihara was a Japanese diplomat stationed in Kovna (Kaunas), Lithuania, who issued thousands of transit visas which enabled Jews to escape the onslaught of the Nazis by travelling to Vladivostok and then Japan, with many of them spending the remainder of the war in Shanghai, China. Some of the refugees saved through these visas included the Mirrer Yeshiva and some talmidim of Yeshiva Chachmei Lublin.

Sugihara’s deeds were recognized in 1984 by Israel, which bestowed upon him the title of Righteous Among the Nations, and posthumously by Japan, in 2000. Nobuki Sugihara was invited to attend Hebrew University in Yerushalayim in the late 1960s.

Nobuki Sugihara had applied at the Israeli embassy in Brussles for an entrance visa on September 28, but received a letter rejecting his application since it was missing some of the required documentation.

“I sent him all the documents, except two things,” Sugihara said. “One is where I would quarantine in case I am infected” as well as documentation of health insurance.

Sugihara said he has no friends or family in Israel with who he can quarantine, and insisted it was the responsibility of the municipality to take care of these details.

“The host of the ceremony should apply for us,” said Sugihara. He stated that he believed that the city would rather not have him at the ceremony.

Four other family members and friends — Esin Ayirtman, Haruka Sugihara, Oliver Van Loo, and Philippe Bergonzo — all of whom received two COVID-19 shots and submitted their vaccination papers, have also been rejected.

Nobuki expressed his dismay at the irony that Israel is keeping him away from the ceremony because of a couple of missing documents.

Some of the bureaucrats initially failed to see the importance of having the son of the heroic diplomat attend the event, asking if he has a first-degree relative in the country, a key criterion for entry for a standard traveler.

Interior Minister Ayelet Shaked personally intervened last Thursday to secure an entry visa for Mr. Sugihara, instructing officials in her ministry to do whatever necessary to allow Mr. Sugihara and the four other family members and friends to enter Israel.

“Sugihara is one of the Righteous Among the Nations who saved thousands of Jews,” Shaked told The Times of Israel.

In the end, Eyal Siso — who sits on the interagency exceptions committee set up to handle appeals to the COVID-19 restrictions — signed off on the entry documents.

After receiving his last-minute visa, Nobuki Sugihara addressed over 100 people who attended the event, saying he used to live in the neighborhood near the square while studying Hebrew University.

“The view is different,” he said. “The trees are bigger, people grew, survivors made children and grandchildren,” noting that there were several hundred thousand descendants of those who were able to escape to safety, and his father “never imagined” so many of the recipients of the documents he issued would survive. 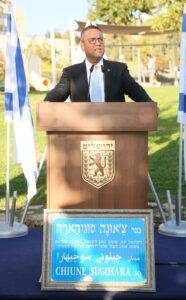 Mayor Moshe Lion said it was “the most emotional” event he had attended since taking office three years ago as so many descendants gave thanks for Sugihara’s actions.

“It’s a reminder that it’s never possible to know the results of our deeds in the future. In the merit of one man, the chassid umos ha’olam Chiune Sugihara, Jerusalem merited to boast Yeshivas Mir, which will soon mark the tenth yahrtzeit of the beloved Rosh Yeshivah HaGaon HaRav Nosson Tzvi Finkel, z”tl. Sugihara did everything in his power and worked tirelessly to save Jews from the clutches of the Nazis, actions that cost him a not-so-simple personal price. The least that the city of Jerusalem can do for Sugihara is to commemorate his name as a sign of appreciation for his noble deeds.”

“We love you,” Lion said, addressing members of the Sugihara family. “We will always appreciate what you did — and by ‘we,’ I mean the residents of Jerusalem and the people of Israel.”