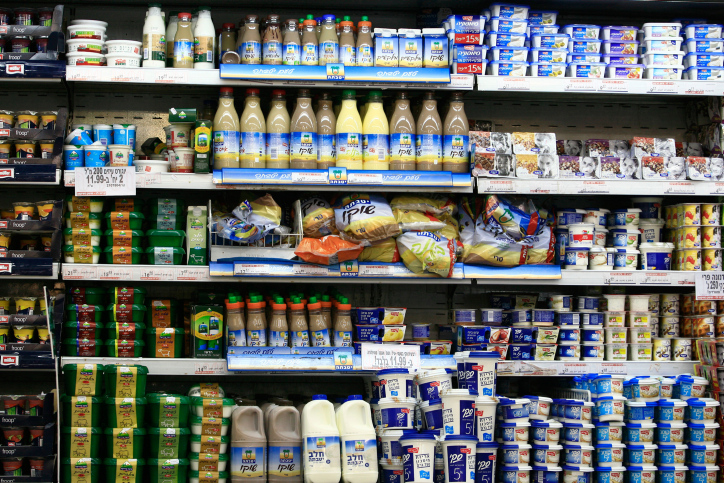 The three-week-long shortage of milk at retail stores across Israel is expected to continue in the coming weeks, Haaretz reported.

When the shortage first became noticeable, the Israel Dairy Board claimed it would be over in a matter of days. When that didn’t happen, dairy farms estimated that the shortage would end in early October.

Now it turns out that even the most pessimistic forecasts were too optimistic, and production of price-controlled milk will only catch up with demand at the end of next week at the earliest.

Israel experiences a milk shortage every year in the late summer, around the Yom Tov season.

This year, the Dairy Board and milk producers claim, the shortage has been particularly severe because the days of the Yamim Tovim were all on weekdays, rather than at least partially overlapping with Shabbos, when production has to stop regardless.

As for dairy products that are not price-controlled, like low lactose or lactose-free milk, the shortage isn’t expected to end before the last week of October.

Dairy producers say that another reason for the shortage is the fact that unlike previous years, many Israelis did not leave the country during the Yom Tov season due to coronavirus restrictions on international travel, leading to greater demand in Israel.

In addition, the shortage itself also generates an increase in demand, with consumers rushing to buy more milk than usual fearing they would be left without.

According to a major wholesaler, the dairy plants “could have prepared better,” arguing the reasons that led to the shortage were foreseeable.

Retailers argue the shortage supports the need to open the dairy market in Israel to imports. “Who ever heard of a civilized country running short on a basic staple like milk for weeks on end? We must open the market to imports if we want to prevent the next fiasco,” said Rami Levy, owner of a supermarket chain.

“We need to solve this problem once and for all,” said Levy. “After all, in a week there will be enough milk in the stores, and everyone will have forgotten about this, and then next August it will be hot again and the cows’ production will start to drop, and then the chagim will come again and there’ll be a shortage, and they’ll talk about it again – rinse and repeat. It’s been like this for decades.”

The reason that Levy, like other retailers, can’t import milk, and on the other hand not everyone can produce milk, is because milk in Israel is a planned market, which means it operates on a quota system, with tariffs on imports left purposely high.

The Dairy Board decides the quantity of milk to be produced each year, and the agriculture minister signs a decree each December determining the amount of milk to be produced the following year. Each dairy farmer has a set quota, and the price they’ll get from the dairy plants for the raw milk – the target price – is also preset.

The system of quotas and high tariffs has caused shortages in other dairy products as well. In 2019 butter disappeared from the shelves due to increased demand, coupled with the fact that the dairy plants didn’t want to produce too much butter, because it is a price controlled product with low profit margins. At the same time, due to the high tariffs on butter, it wasn’t worth anyone’s while to import it.

The situation changed gradually when then-Finance Minister Moshe Kachlon set a certain quota for duty-free butter imports. His successor, Yisrael Katz, decreed that the tariff on butter be removed completely, but this was done by a temporary order that will expire at the end of 2022.