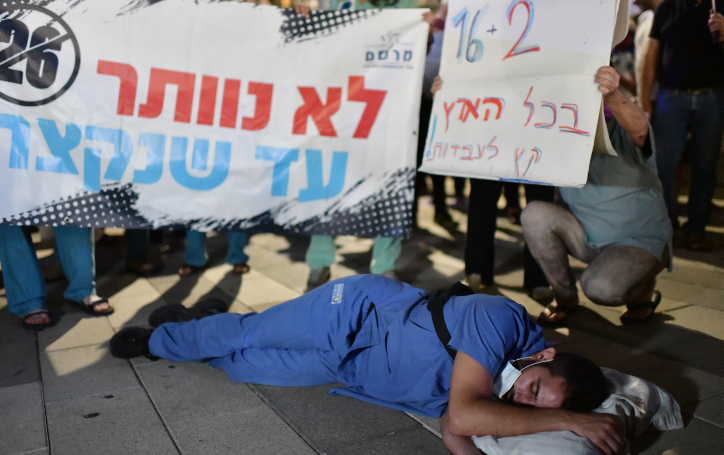 Hundreds of medical interns and supporters protested in Tel Aviv on Motzoei Shabbos as part of their campaign to shorten 26-hour-long shifts, two days after nearly 2,600 interns quit en masse over the long-contested matter.

“We deserve to learn during our internship,” one protester told Channel 12. “You can’t learn on an internship in which you don’t sleep for 10 shifts a month, or even eight shifts.”

Medical interns have been protesting over the 26-hour shifts they are forced to work, and have rejected a government proposal to gradually reduce shifts to 18 hours by 2026 — but only in 10 hospitals in outlying areas.

“We were lied to, deceived. We were promised a real plan … there is no plan,” she said, arguing that the ministry’s proposal ignored 90% of interns and consisted of “claims that may sound good but have no commitments behind them.”

According to Kan News, an attempt by ministry officials to call in protest representatives for a meeting during the rally was rejected, with the demonstrators saying they would meet with Health Minister Nitzan Horowitz and no one else.

Meanwhile, Channel 13 reported that the Health Ministry will move forward with its announced plan to shorten interns’ shifts, despite the protesting interns rejecting it this week.

Channel 13 said the ministry will work with the Finance Ministry on a budgetary agreement to fund the plan, hoping that making the promise more concrete will help cajole the interns into backing down from their resignations.

Many interns have said the promises made in the plan are not enough, regardless of whether the government follows through.

Channel 13 said that Health Ministry officials would attempt to hold talks with Mirsham representatives, to try and get them to take back their resignation papers before they take effect.

The 2,590 doctors-in-training signed off on resignation papers on Thursday, which would only go into effect in two weeks.

The government had promised that after the pilot program in the 10 outlying hospitals, the plan would expand to all hospitals, but only if the necessary budget could be found and if a committee set up to examine the issue finds there has been no deterioration in the level of medical care.

MK Rabbi Yaakov Litzman (United Torah Judaism), former Health Minister said that: “the struggle of the interns to shorten the shifts from 26 to 18 hours – is correct and worthy. There is no doubt that continuous work of over 16 hours impairs the quality of medical care provided to patients, and this is a real risk to patients.

“In my tenure in the health portfolio, I led their struggle and fought in every way to shorten the shift times to only 16 hours. Unfortunately, the Medical Association at the time, folded and did not agree to continue the struggle on the issue. The decision of Mirsham on behalf of the interns is to be welcomed, to fight the important and critical issue, which is mainly about saving lives and streamlining the health system. I would like to strengthen the hand of the interns and praise their important activities and their worthy struggle.

“The Ministers of Health, Economy and Finance are expected to provide a different and respectful attitude towards thousands of interns who are engaged in sacred work to save lives day by day, hour by hour, in unimaginable conditions.

“The reality in which thousands of interns are required to resign due to a lack of compliance with their just and clear demand, indicates chaos and a blatant irresponsibility.”

Up until the year 2000, interns worked 36-hour shifts and sometimes even more. That year, an agreement was signed to reduce the shifts down to 26 hours, with a two-hour break.

In 2012, following appeals to reduce the hours again, the government adjusted the irregular work permit to limit interns to two shifts a week, and for them to not work more than 71.5 hours in a week.

Despite the new regulations, most hospitals have not implemented them.