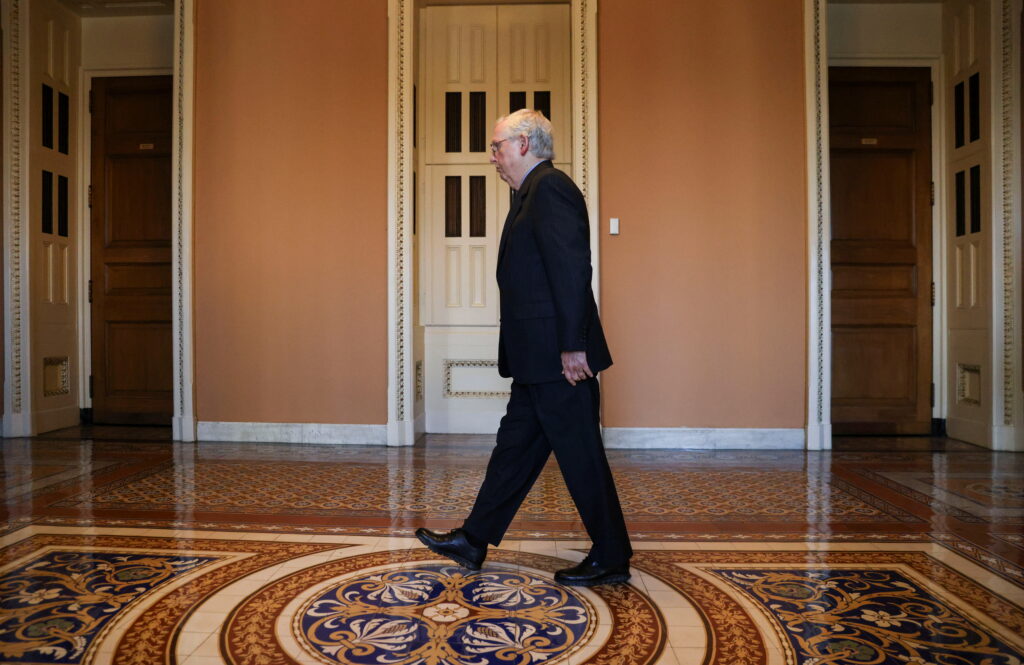 The Senate approved legislation on Thursday to temporarily raise the federal government’s $28.4 trillion debt limit and avoid the risk of a historic default this month, but put off until early December a decision on a longer-lasting remedy.

The Senate voted 50-48 to pass the bill following weeks of partisan fighting. Earlier, 11 Republicans voted in favor of a procedural vote allowing the bill to proceed.

The Senate-passed bill now goes to the House of Representatives, which needs to approve it before President Joe Biden can sign it into law. The House will hold a vote on the bill on Tuesday, according to the office of the No. 2 House Democrat, Steny Hoyer.

“President Biden looks forward to signing this bill as soon as it passes the House and reaches his desk,” White House press secretary Jen Psaki said in statement on Thursday.

“As we approach the coming months, we hope that even more Republicans will join Democrats in responsibly addressing the debt limit instead of choosing default or obstruction.”

The $480 billion increase, which would lift the debt limit to $28.9 trillion, is expected to be exhausted by Dec. 3, the same day that funding for most federal programs expires under a stop-gap measure passed earlier this month following another partisan standoff.

That means that over the next eight weeks, the bitterly divided Congress will have the twin challenges of finding a middle ground on agency spending through September 2022 – ranging from education and foreign aid programs to immigration enforcement and airport security – and avoiding yet another debt limit meltdown.

The vote followed a months-long standoff that brought the nation close to the Oct. 18 date that the Treasury Department forecast as when it would no longer be able to meet its obligations.

“Republicans played a dangerous and risky partisan game and I am glad that their brinksmanship did not work,” Senate Majority Leader Chuck Schumer said after the vote.

The plan emerged on Wednesday after top Senate Republican Mitch McConnell said Republicans were open to a temporary hike after twice blocking Democrats’ attempts to raise the cap. That offer came after Biden raised the possibility of bypassing the Senate‘s filibuster rule requiring 60 of the 100 members to agree on most legislation.

Not all Republicans were happy with McConnell’s move, and it took long negotiations behind closed doors to secure enough Republican votes to advance the measure.

“This is a complete capitulation,” said Republican Lindsey Graham.

Earlier in the day, news of the negotiations drove Wall Street’s main stock indexes to end sharply higher in a broad-based rally. In a sign of bond market relief, the yield on one-month Treasury bills fell to the lowest point since Sept. 8 as investors deemed that the risk of default had eased.

Washington’s debt limit troubles are unlikely to be resolved with passage of the short-term increase.

McConnell is still expected to insist that the next increase in December be achieved through the time-consuming “budget reconciliation” process, which would allow for passage without any votes from his party.

Doing so could bolster Republican candidates in the 2022 congressional elections as they try to burnish their credentials as fiscal conservatives – even though most of them previously supported an array of measures passed during Republican Donald Trump’s administration that jacked up U.S. budget deficits.

Democrats have adamantly rejected using the reconciliation process, although they have used it to pass some of Biden’s other priorities, saying that in this case it is too unwieldy and would establish a bad precedent.

Referring to the deal providing a debt limit reprieve until December, McConnell said in a Senate speech: “Now there will be no question. They’ll (Democrats) have plenty of time” to pass the next increase using reconciliation.

Democrats had been trying to pass legislation that would have raised the debt limit through the end of 2022, which Republicans blocked.

While the deal relieves debt ceiling pressures for now, it adds to the high-stakes, partisan battles Congress will wage through the end of the year.

Democrats want to pass two massive spending bills that make up much of Biden’s domestic agenda in the coming weeks, including a multi-trillion-dollar social policy package to be passed by reconciliation and a $1 trillion bipartisan infrastructure bill.

But by late November, their attention will have to return to funding the government and again avoiding the debt ceiling.