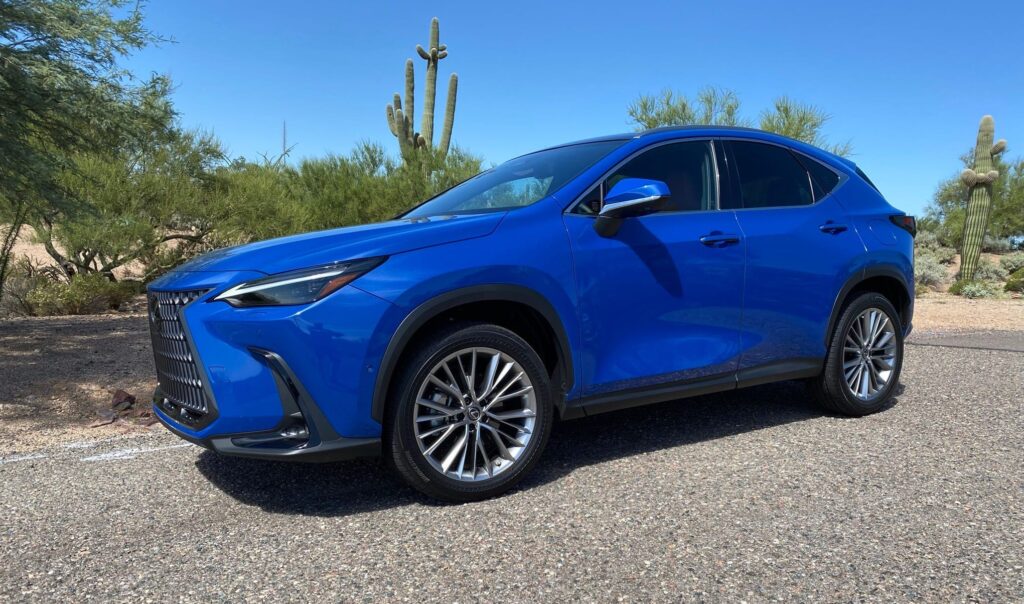 The new NX should join its big brother — the RX, without which no higher-end preschool pickup lane is complete — as the mainstays of Lexus’ lineup in a post-sedan, increasingly electrified auto industry.

The NX is already popular. It sold 62,079 in the U.S. in 2020. The new lineup, which includes two gasoline-powered models, a hybrid and the plug-in hybrid, as well as both front- and all-wheel-drive models, should increase the NX’s appeal.

I drove varieties of the NX from suburban Phoenix through neighborhoods and desert scrub to quirky sundials and sculptures of nearby Carefree, Arizona.

The NX uses a new platform that makes the new models significantly lighter than their predecessors.

The 2022’s styling is supposed to embody Lexus’ new dedication to performance and handling, but it’s an evolution of the outgoing SUV. Obvious changes include moving the L-shaped daytime running lights from below to above the headlights.

Lexus expects the 2022 NX 350h hybrid to snag 25% of sales, the NX 450h+ PHEV another 5%. The 450h+ will be available mostly in California and other states that incentivize zero-emission vehicles. Lexus estimates it’ll go about 36 miles on a charge, everything many drivers need on a daily basis.

Official EPA figures for the PHEV and all the rest of the ’22s will be available later this year.

The base NX 250 model has a 203-horsepower normally aspirated 2.5L four-cylinder engine, front-wheel drive and an eight-speed automatic transmission. Prices start at $37,950. All-wheel drive raises the price to $39,950. Acceleration is a leisurely 8.6 seconds with front drive, 8.2 seconds for AWD.

The sportiest NX is the 350, which comes with a 275-hp turbocharged 2.4L engine, all-wheel drive and the eight-speed automatic. The quickest in the lineup, it accelerates to 60 mph in 6.6 seconds. Prices start at $41,550.

The NX 350 is the sporty member of the family. The 350h hybrid’s acceleration is adequate, but its gasoline engine is a bit noisy when accelerating hard. The PHEV’s more powerful batteries deliver acceleration with less fuss.

Only the normally aspirated base engine — which Lexus did not make available to test — achieves its published performance with 87 octane regular gasoline. Both hybrids and the turbo recommend 91 octane or higher.

All NX models benefit from a cloud-based infotainment system Toyota developed in Texas.

Reliant on touchscreens and voice commands, it’s a huge improvement from quixotic previous Lexus controls that included a joystick and a touch pad.

The climate controls include dials for temperature, but rely on the touchscreen to adjust fan speed. Audio controls have a physical volume dial and touchscreen tuning.

In addition to Google searches for destinations, menus, operating hours and the like, the cloud-based system can store multiple drivers’ preferences for audio, climate and more. Bonus: Those preferences will be available when you get into any Lexus or Toyota equipped with the new infotainment system.

The base touchscreen measures a generous 9.8 inches, with a gargantuan 14-inch one available.

The navigation system stores the destination when the connection to the cloud gets tenuous.

Just about every interior surface is padded. Wireless Apple CarPlay and Android Auto are standard. Wireless charging is an option.

A configurable 10-inch head up display presents information clearly, and can be adjusted from a convenient thumb pad on the steering wheel.