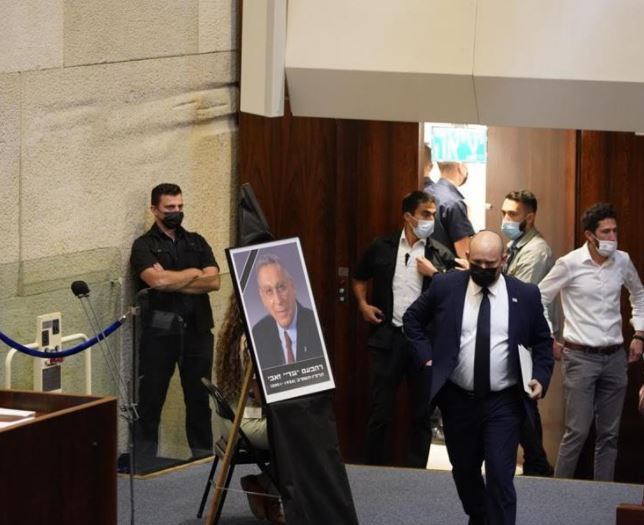 ​The Knesset Plenum held a special sitting on Wednesday commemorating the late former MK and Minister Rechavam “Gandhi” Ze’evi, Hy”d, with the participation of the Ze’evi family.

Speaker of the Knesset MK Mickey Levy (Yesh Atid) said at the start of the sitting: “The assassination of Minister Ze’evi was planned and organized for a long time. They followed him and collected intelligence on his daily routine. The coldblooded decision to murder an Israeli minister was and still remains something that crosses all the red lines. This was a criminal attack on the State of Israel and its symbols, and an intolerable violation of its sovereignty and its rule.

“On a personal level, I remember that terrible morning as commander of the Yerushalayim District Police. I arrived quickly at the Hyatt Hotel, which is located a few minutes away from the Israel Police’s National Headquarters. When I arrived at the scene, I was horrified to discover that a minister had been murdered. This was a traumatic and terrible day for me in that capacity. Later on, I organized the forces to engage in pursuit together with the Shin Bet in order to apprehend the foul murderers.

“Over the years, the State of Israel hunted down the perpetrators and planners of the terrorist assassination, and in 2006, during Operation First Fruits, it finally laid its hands on the murderers, who were about to be released from prison in Jericho. This was of supreme importance in the war on terrorism and in the battle against the severe fallout of that difficult incident,” said the Speaker.

Prime Minister MK Naftali Bennett (Yamina) said​: “Gandhi was a sharp rival to those who disagreed with his opinions, an outstanding and knowledgeable antagonist. He had a sharp and witty tongue, which skillfully expressed his worldview. In a world of little black, little white and a great deal of gray — Gandhi was a man of black and white. He was not afraid to fight for his views, even if they placed him outside the heart of the consensus. At junctures in which many people stood still and searched for direction, Gandhi had no doubt where the path should lead. Gandhi’s service here, within the walls of the Knesset, lasted for about 13 years. From this podium too, Gandhi continued to fight for his opinions and for his concern for Eretz Yisrael and its future.

“Dear Ze’evi family, the 20 years that have passed in the absence of the father and grandfather you knew and loved were undoubtedly filled with longing and yearning for the person he was for you. It is said that a person lives on as long as he exists in the memory of others, and I am certain that just as he is alive and present in your lives — he is cherished in the hearts of many members of this people. We will remember Rechavam Ze’evi as someone who fervently loved Eretz Yisrael, as a Jew who was proud of his heritage. We will remember him as an avowed fighter on behalf of Israel and for ensuring its future,” Bennett said.

Leader of the Opposition MK Binyamin Netanyahu (Likud) said: “Twenty years ago, Gandhi was taken from us in a heinous terrorist attack in Yerushalayim. The last article he managed to write before his murder was about the horrific attack on September 11 in the United States; sadly enough, Gandhi himself fell victim to despicable terrorism. Bloodthirsty terrorists cut his life short while he was in the midst of vigorous activity. But terrorism did not win then, and it will not win today.

“But when I say that, there is a condition, and the condition is for us to fight against it with full force, without fear or reservations. Regrettably, the current government is not doing so; it displays great weakness in this field as in many others. There is no response to rocket fire at Kiryat Shmona, there is no response to machine gun fire at balconies in Sderot; they simply aren’t doing anything.

“Gandhi would have raised an outcry at the sight of the panicked run by ministers to Abu Mazen [Mahmoud Abbas], whose cheeks are rosy once again. Gandhi would have protested against the deprivation of IDF combatants, who received no pay raise while 53 billion shekels were promised to Ra’am. Gandhi would have furiously attacked the coronavirus fiascos, the harm caused to the farmers, the acceptance of the emerging nuclear agreement with Iran. Gandhi would not have accepted a government whose leader barely crosses the electoral threshold, and which exists only thanks to the votes of the Islamic Movement. Gandhi would certainly not have accepted the empty talk about a government that is 10 degrees rightward, when in practice it is 180 degrees leftward. Gandhi’s personal voice is lacking, but his outcry is voiced by masses of Israel’s citizens,” Netanyahu said.