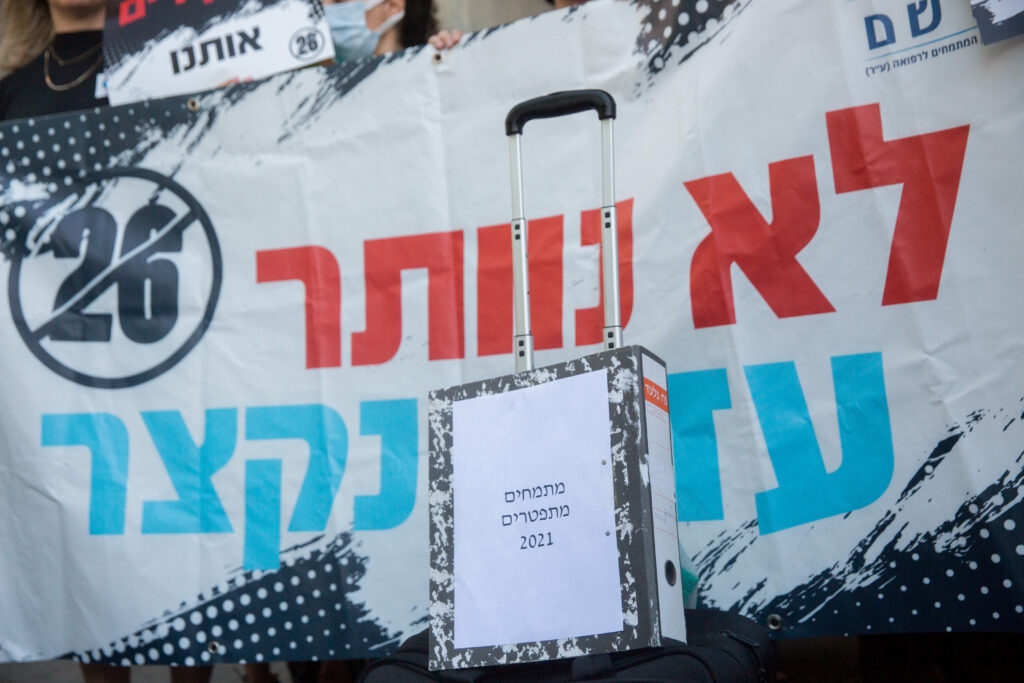 More than 2,500 medical interns carried out their threat to quit their jobs on Thursday over a demand to end 26-hour shifts.

The 2,590 doctors-in-training endorsed a letter that was delivered to the Tel Aviv District Health office by Dr. Ray Bitton, head of the Mirsham organization of medical interns.

Although the resignations are not set to take effect for two weeks, the move has caused alarm within the medical establishment, as a mass walkout of this kind would have a devastating impact on hospital care throughout the country.

“To my regret, we have gathered here for a very sad day that has befallen Israel in which we are painfully forced to take a drastic step and present the resignation letters of more than 2,500 interns,” Bitton said outside the office.

The letter, addressed to Health Minister Nitzan Horowitz, stated that they were motivated to take such a drastic step because patients deserve to get treated by doctors “who are not exhausted, tired, unfocused and without empathy due to inhuman conditions.”

The resignations came a day after the interns rejected a government counter-proposal to gradually reduce shifts to 18 hours by 2026, but only in 10 hospitals in outlying areas. The interns said that only 10 percent of their number would initially benefit from such a decision, and it was not enough.

Horowitz and Economy Minister Orna Barbivai admitted the day before that they are constrained, by among other things, a shortage of medical personnel, and that it would take time to fully meet their demands, but insisted that this would be a significant start.

“The plan is not perfect,” Barbivai said. “But the most important thing in this program is a breakthrough that marks a value-based goal of what we expect from the future generation of medics with regards to labor relations, and working hours are only part of the story.”