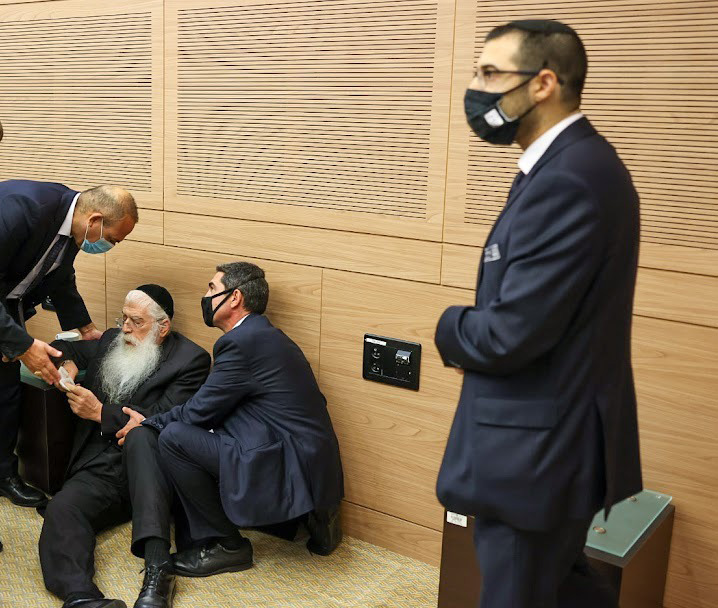 In response to the conduct of Reform MK Gilad Kariv Thursday morning  at the Kosel, who – utilizing his immunity as an MK – smuggled a sefer Torah into the women’s side of the Kosel plaza, MK Rabbi Meir Porush (UTJ) responded with a protest at the Constitution Committee, led by MK Kariv, and prevented the opening of the planned discussions in the committee.

Rabbi Porush refused to vacate, sat down on the floor of the committee and continued to say Tehillim and did not agree to the ushers’ request to vacate. Kariv then called the committee for a break and after a while, the ushers forcibly removed Rabbi Porush.

At the same time that MK Kariv smuggled a sefer Torah into the women’s section of the Kosel, tefillos were held by many hundreds of mispallelim, including about 20 provocative women who come as part of the Women of the Wall group to the Kosel on a monthly basis.

Earlier, MK Rabbi Porush said in response to the Kariv provocation at the Kosel: “The fact that Gilad Kariv exploits his immunity and persuades other people to violate the Kosel’s order, to despise and trample on the sanctity of the place, is crossing a red line and is an unbearable chillul Hashem.”

The Western Wall Heritage Foundation stated that it was saddened by the disturbances during the tefillah at the Kosel on Thursday morning, saying that MK Kariv’s attempt to bring a sefer Torah into the women’s section was in opposition to explicit instructions from the Justice Ministry.

They stressed that a representative of the foundation approached Kariv and asked him not to use his immunity to take this step and that the MK had responded that while he respects the activities of the foundation, “he plans to act as he sees fit.”

The foundation added that it made a special path for the Women of the Wall group “in an attempt to avoid friction.”

“The foundation is deeply pained by these events and calls upon all parties to set aside disputes and give the proper respect to this holy site,” said the foundation.

As for Kariv, “he exploits his immunity [as an MK] and acts as an offender. All the people of Israel see their great fraud. These people have removed themselves from the heritage of Klal Yisrael for generations. All their doing and desire is to discredit and persecute the Jewish people,” he charged.