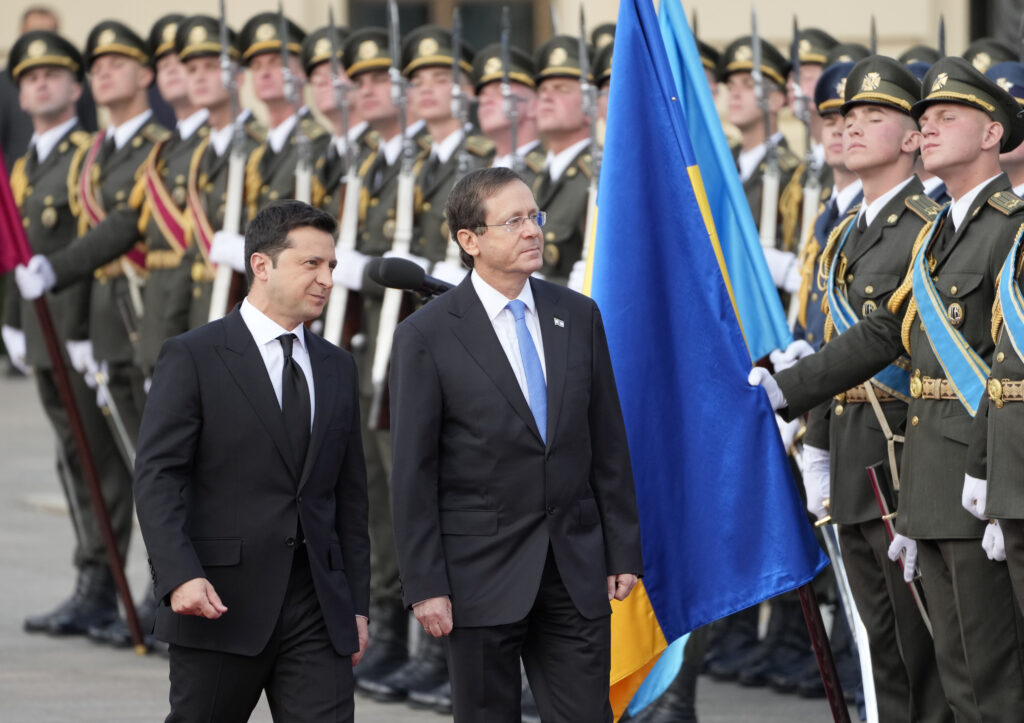 Ukraine’s Holocaust memorial center on Wednesday revealed the names of 159 Nazi SS troops who took part in the killing of Jews during the Babi Yar massacre in Ukraine eight decades after one of the most infamous Nazi mass slaughters of World War II.

Nearly 34,000 Jews were killed within 48 hours in Babi Yar, a ravine in the Ukrainian capital of Kyiv, when the city was under Nazi occupation in 1941. SS troops carried out the massacre with local collaborators.

“Babi Yar is the biggest mass grave of the Holocaust … the most quickly filled mass grave,” said Natan Sharansky, the chairman of the supervisory board of the Babi Yar Holocaust memorial center.

Presidents Volodymyr Zelenskyy of Ukraine, Isaac Herzog of Israel and Frank-Walter Steinmeier of Germany attended a ceremony in Kyiv on Wednesday to remember the victims of the massacre.

“It’s hard to breathe at this place — thousands of children took their last breath here,” Zelenskyy said. “It’s hard to stand here — thousands of bullets knocked people down here in Babi Yar. The earth was trembling from the convulsions of people who were still alive and trying to get out.”

Herzog began his speech with a prayer, saying that “eighty years ago there was no one left here to pray.” He called for combating anti-Semitism, adding that “people mustn’t forget about what catastrophe their silence could lead to.”

“For us Germans, there can only be one response: never again!” Steinmeier said.

Zelenskyy, Herzog and Steinmeier also inaugurated a memorial center, still under construction, dedicated to the stories of Eastern European Jews who were killed and buried in mass graves during the Holocaust. Of the 2.5 million Jews in that region, 1.5 million died in Ukraine alone.

On Wednesday, the Babi Yar Holocaust memorial center revealed the initial 159 names of hundreds of Nazi troops who took part in the Babi Yar massacre on Sept. 29-30, 1941, when 33,771 Jews were murdered.

“Despite confessions, evidence and testimonies being submitted as late as the 1960s by some of the Nazi soldiers who carried out the murders, only a few of those involved ever faced justice for their heinous crimes,” it said.

“They were between 20 and 60 years old,” the memorial center said. “They were educated and uneducated, they included engineers and teachers, drivers and salespeople. Some were married and some were not. The vast majority of them returned to live a normal life after the war. They testified at trial and were found not guilty, except for very few commanders, not the soldiers who carried out the horrific massacre.”

The head of the center’s academic council said some of the 159 Nazi troops named “were shooters. Others extracted the Jews from their homes. Others took their belongings and their luggage. Others armed the weapons while others were serving sandwiches, tea and vodkas to the shooters. All of them are guilty.”

The three presidents on Wednesday attended the opening of a new memorial – the “Crystal Crying Wall” created by conceptual artist Marina Abramovic. Within six months, the first museum space will be unveiled.

“We are going to give the real faces to the Holocaust, whether it’s the faces of the victims, of the executors or those who were helping to save Jews,” Sharansky told The Associated Press.

He noted that while some Ukrainians collaborated with the Nazi killers, at least 2,600 Ukrainian families were hiding Jews at the risk of their own lives.