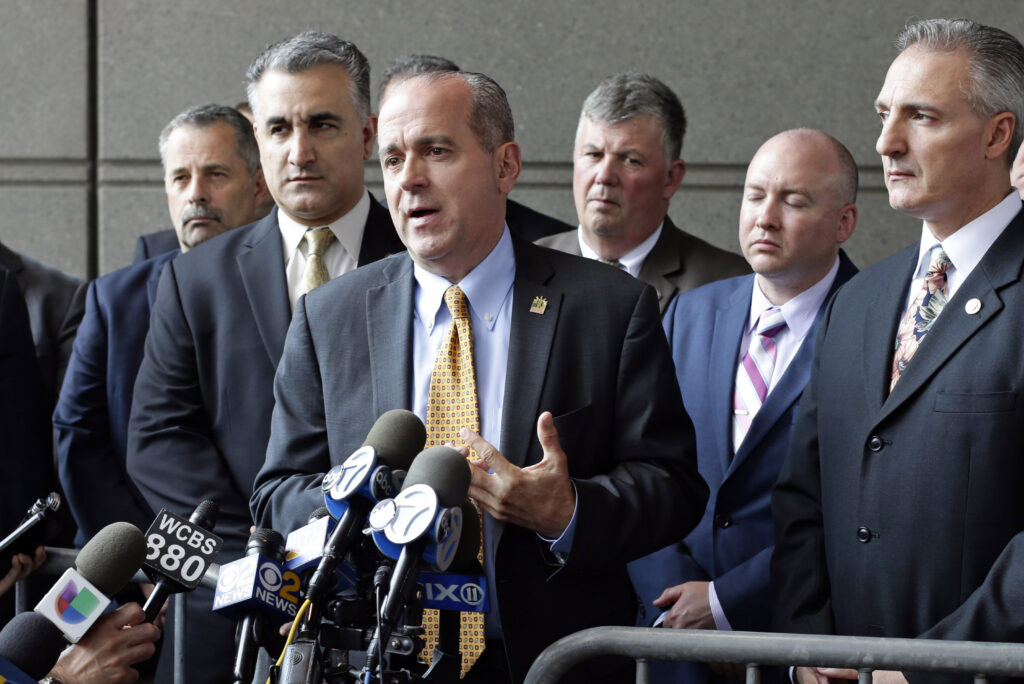 Federal agents raided the offices Tuesday of a New York City police union, the Sergeants Benevolent Association, and the Long Island home of its bombastic leader, who has clashed with city officials over his incendiary tweets and hard-line tactics.

FBI spokesperson Martin Feely said agents were “carrying out a law enforcement action in connection with an ongoing investigation.”

Agents were seen carrying boxes out of the union’s Manhattan headquarters and loading them into a van. The FBI also searched union president Ed Mullins’s home in Port Washington, Long Island, Feely said.

Mullins resigned as the union’s president Tuesday night, according to a message the union’s board sent to members. The board said he did so at its urging. The union represents about 13,000 active and retired NYPD sergeants and controls a $264 million retirement fund.

“The nature and scope of this criminal investigation has yet to be determined. However, it is clear that President Mullins is apparently the target of the federal investigation,” the board’s message said. “We have no reason to believe that any other member of the SBA is involved or targeted in this matter.”

The union’s board said that while Mullins is presumed innocent, it asked him to step aside to ensure the union’s day-to-day operations continue unimpeded. The board said the union was cooperating with the investigation.

Messages seeking comment were left with Mullins and the union. Calls to Mullins’s cell phone went to a full voice-mail box.

Mullins, a police sergeant detached to full-time union work, is in the middle of department disciplinary proceedings for tweeting NYPD paperwork last year regarding the arrest of Mayor Bill de Blasio’s daughter during protests over the Minneapolis police killing of George Floyd.

Mullins also faced criticism for lobbying personal attacks and inappropriate language at elected officials on Twitter, and for mocking a young college student who was stabbed to death by claiming she had knowingly gone to a dangerous place at the time of her death.

Mullins’s department trial began last month but was postponed indefinitely after one of his lawyers suffered a medical emergency.

Mullins is also suing the department, claiming they were trying to muzzle him by grilling him and recommending disciplinary action over his online missives, which have included claims that officers were at war with city leaders.

Responding to Mullins’s union resignation, Mayor de Blasio tweeted: “Ed Mullins dishonored his uniform, his city and his union more times than I can count. It was just a matter of time before his endless hatred would catch up with him. That day has come.”

Mullins, a police officer since 1982, rose to sergeant, a rank above detective but below captain and lieutenant, in 1993 and was elected president of the sergeants union in 2002.

Under Mullins’s leadership, the union has fought for better pay — with contracts resulting in pay increases of 40% — and staked a prominent position in the anti-reform movement.

Though he’s a full-time union chief, city law has allowed Mullins to retain his sergeant’s position and collect salaries from both the union and the police department. Last year, Mullins made more than $220,000 between the two, according to public records: $88,757 from the union and $133,195 from the NYPD.

The NYPD referred questions about Mullins to the FBI.