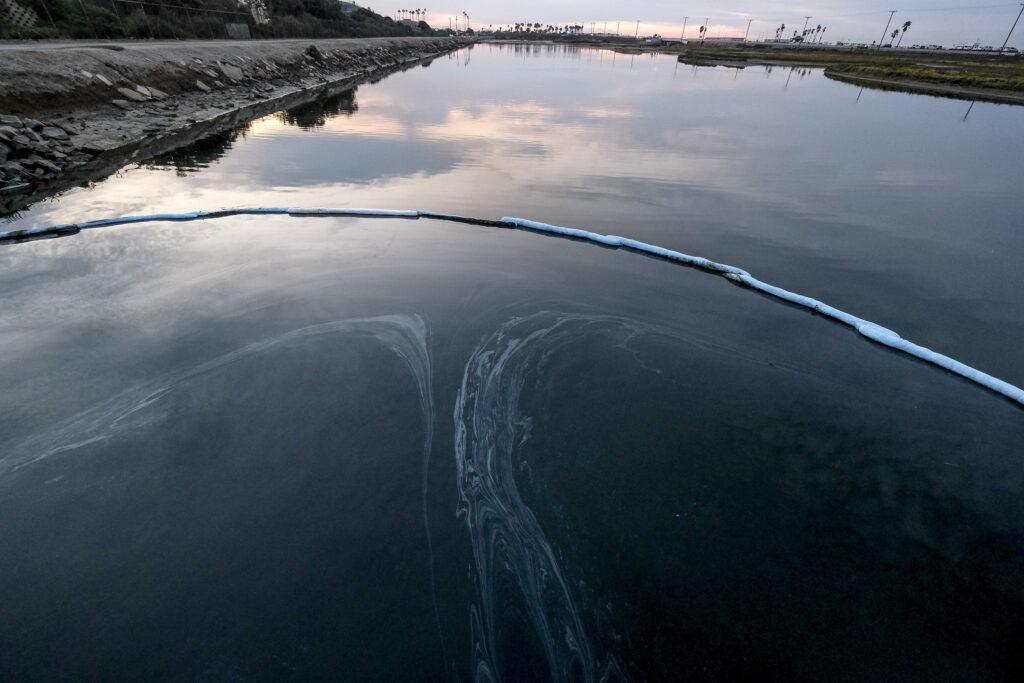 The U.S. Coast Guard received the first report of a possible oil spill off the Southern California coast more than 12 hours before a company reported the major leak in its pipeline and a cleanup effort was launched, records show.

Oil spill reports reviewed Monday by The Associated Press raise questions about the Coast Guard’s response to one of the state’s largest recent oil spills as well as how quickly Amplify Energy, the company operating three offshore platforms and the pipeline, recognized it had a problem and notified authorities.

Two early calls about the spill came into the National Response Center, which is staffed by the Coast Guard and notifies other agencies of disasters for quick response. The first was from an anchored ship that noticed a sheen on the water and the second, six hours later, from a federal agency that said a possible oil slick was spotted on satellite imagery, according to reports by the California Office of Emergency Services.

The spill sent up to 126,000 gallons (572,807 liters) of heavy crude into the ocean off Huntington Beach and it then washed onto miles of beaches and a protected marshland. The beaches could remain closed for weeks or longer, a major hit to the local economy. Coastal fisheries in the area are closed to commercial and recreational fishing.

Gov. Gavin Newsom proclaimed a state of emergency in Orange County, directing state agencies “to undertake immediate and aggressive action to clean up and mitigate the effects” of the spill.

Experts say it’s too early to determine the full impact on the environment but that so far the number of animals found harmed is minimal.

Investigators are looking into whether a ship’s anchor may have struck a pipeline on the ocean floor, Coast Guard officials said Monday.

Shaye said the Coast Guard was not notified of the disaster until Saturday morning, though records show its hazardous spill response hotline received the first report of a possible oil slick Friday evening.

A foreign ship anchored off the coast witnessed an “unknown sheen in the water near their vessel” at 6:13 p.m. and the report was called into the response center just after 8:22 p.m., according to the state report.

“Although there were numerous vessels within immediate proximity to the anomaly, none were clearly associated with the anomaly,” the report said. “These factors prevented the possible identification of a point source. Still, the NRC report allows for high confidence that this was oil.”

The company that operates the pipeline first reported the spill to the Coast Guard’s response center at 8:55 a.m. Saturday. However, the report said the incident occurred at 2:30 a.m.

Safety advocates have pushed for years for federal rules that would strengthen oil spill detection requirements and force companies to install valves that can automatically shut down the flow of crude in case of a leak. The oil and pipeline industries have resisted such requirements because of the high cost.

“If the operator had more valves installed on this line, they’d have a much better chance at having the point of failure isolated by now,” said Bill Caram with the Pipeline Safety Trust, an organization based in Bellingham, Washington.

The pipeline was built using a process known as electric resistance weld, according to a regulatory filing from the company. That welding process has been linked to past oil pipeline failures because corrosion can occur along seams, according to government safety advisories and Caram.

Annual reports filed with federal regulators in 2019 and 2020 showed inspections for the inside and outside of the pipe revealed nothing requiring repairs.