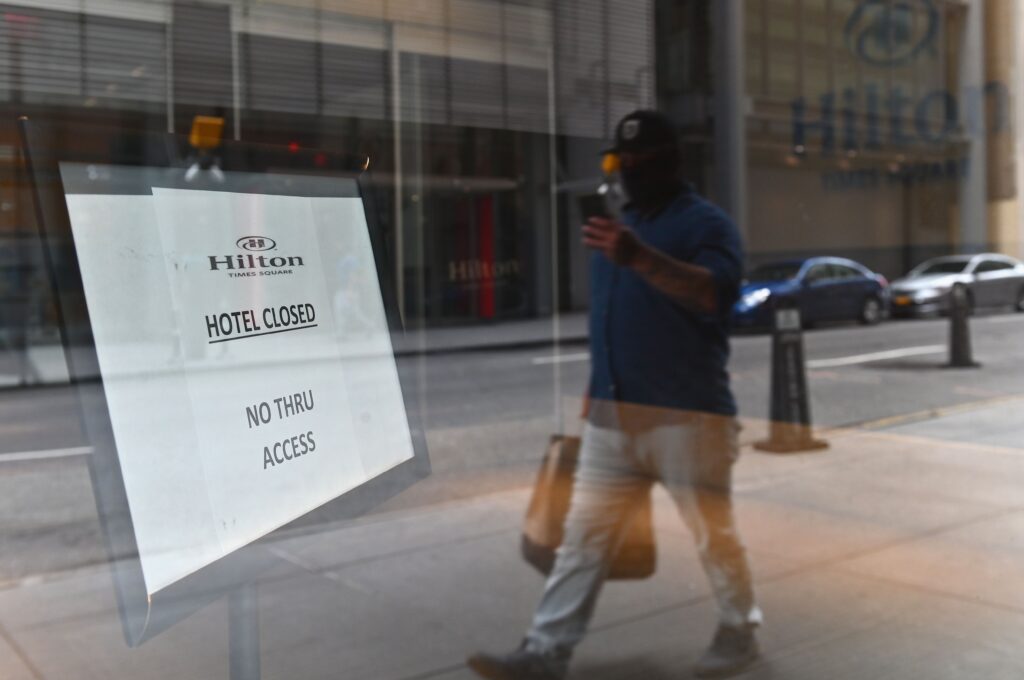 New York City is requiring large hotels that closed or had mass layoffs during the COVID pandemic to give severance pay to their workers if they don’t reopen.

The legislation requires hotels with over 100 rooms that closed or laid off over 75% of its employees after March 1, 2020, to pay the laid-off workers $500 per week for each week they were laid off, up to 30 weeks, unless the hotel reopens by November 1, 2021 with at least 25% of its workers who were employed as of March 1, 2020. If a hotel had provided severance pay prior to the passage of the bill, that amount could be deducted from the $500 weekly payment.

The bill passed the City Council on September 23 by a 40-3 margin, and was signed into law Tuesday by Mayor Bill de Blasio, at an event at City Hall with members of the NY Hotel Trades Council union. It doesn’t apply to a hotel that has closed permanently and is being converted to an alternate use, as long as employees are offered severance pay worth at least 20 days per year of service, at the same rate that the employee was paid for paid days off. The bill also doesn’t apply to hotel managers or supervisors.

“This legislation is about justice for working New Yorkers and giving our hotel workers their fair share,” de Blasio said. “The tourism sector is critical to New York City, and having hotels reopen and employees back to work will supercharge our recovery.”

Councilman Francisco Moya, who sponsored the legislation, called it “another step forward towards a fair economic recovery from COVID, a pandemic that has hit hard the very communities that hotel workers represent.”

NY Hotel Trades Council President Rich Maroko said that “by encouraging hotels to reopen and recall their workers, this bill will give thousands of jobless New Yorkers the hope and financial security they so desperately need.”

De Blasio has in the past been accused of pushing legislation beneficial to the Hotel Trades Council, which, The New York Times reported in an April article, “endorsed his 2020 presidential campaign, pouring $440,000 into ads to bolster his ill-fated candidacy.” The mayor has also been promoting a bill, set for a Council vote later this year, that would require Council approval for any new hotel in the city. While de Blasio “has said hotels create more traffic and activity than ordinary buildings, and he has defended the policy as good for both organized labor and community residents,” according to the Times report,” the bill would benefit the union, which opposes construction of new hotels, many of which are non-union. The union’s calculation, according to the Times report, “has been that limiting the development of such hotels, which typically offer less-expensive lodging than existing full-service hotels, would tend to increase hotel room prices generally and bolster the higher-end hotels where many of its workers are employed.”

City Hall did not respond Tuesday to Hamodia’s request for comment about accusations that de Blasio is paying back the union for its support of his presidential run.

Opponents of the bill who spoke with Hamodia on Tuesday were sharply critical of the legislation.

“Does anyone think these hotels closed because they had enough cash on hand for payroll?” said Councilman Joe Borelli?  “New York has become a bizarre socialist dystopia.”

“The same New York City government that shuttered New York businesses and sent quota agents to terrorize communities now has the chutzpah to pretend it is doing something to get some New Yorkers back to work,” said Councilman Kalman Yeger. “None of our local businesses are seeing a single penny of assistance from New York City; the money only flows out, from our businesses to the ticket-terrorizing City of New York. And the many thousands of New Yorkers who are not hotel employees are being ignored, too – at the same time as unemployment benefits are running out.

“The fact is this law is illegal, it is preempted by New York State law, and is most likely unconstitutional as well. A better plan would be to clean our city of crime and filth so tourists feel comfortable visiting again. But cleaning New York City is not a government priority because it is so focused on this fake press-release giveaway that will never see the light of day before being stricken down by the courts.”